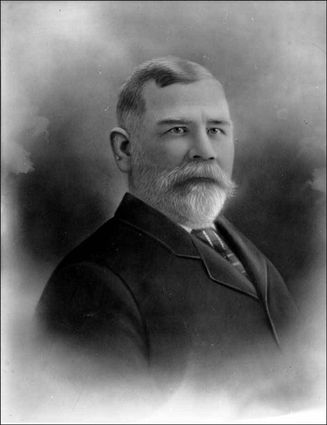 John Brady, who served as Alaska's governor from 1897-1906, lost his job when he chose to believe that a conman was a good man.

Many have heard tales touting the shenanigans of conmen like Jefferson "Soapy" Smith and a man named Hendrickson, better known as the "Blue Parka Bandit." But neither of them caused the demise of an Alaska governor's political aspirations. That dubious honor falls upon H.D. "Harry" Reynolds, who singlehandedly brought down Gov. John Brady in 1906, according to a 1984 article written by Alaska historian Stephen Haycox for the Anchorage Daily Times.

Brady came to Alaska in 1878 as a protégé of missionary-educator Sheldon Jackson and helped establish the Sheldon Jackson College. He taught school in Sitka for several years and then opened a dry goods store. He later opened a freighting service and a sawmill and lumberyard.

It appears that Brady met Reynolds while in Sitka. He may have recognized Reynolds as a kindred spirit, an entrepreneur like himself who was making his way in the last frontier.

Sources say the two became good friends and that Reynolds may have invested in Brady's sawmill business. So when Brady was appointed governor for Alaska in July 1897, just as the Klondike Gold Rush was beginning, Reynolds seized upon the opportunity to use the governor's good name to convince people that he was an upstanding citizen and businessman.

Reynolds first appeared in Valdez in the early 1900s when folks were trying to pick the best route for a railroad to carry valuable ore from the Kennecott copper mine. Reynolds convinced the people of Valdez that his Alaska Home Railway, starting at their town, was a better idea than the Morgan-Guggenheim Alaska Syndicate's idea of building a line from either Cordova or Katalla.

"My railroad is your railroad," he claimed.

Many Valdez residents believed in Reynold's plan and invested their entire savings and businesses into supporting the Reynolds-Alaska Development Company. They may have felt secure in doing so, too, because Alaska Gov. John G. Brady was listed as one of the company's five trustees.

Soon Reynolds had enough money to start his railroad. He also bought up much of the town and owned a newspaper, hotel, bank and some of the town's streets. But when the powerful Alaska Syndicate chose Cordova as the terminus for its Copper River and Northwestern Railway, Reynolds skedaddled out of town in a hurry, owing money to many of the fine folks of Valdez – who now had no railroad and 500 unemployed workers.

This turn of events did not dampen Gov. Brady's faith in Reynolds, however. Brady blamed the Guggenheim trust, believing it was a ruthless company that conspired against Valdez investors.

While the governor may have been blind to Reynold's schemes, the higher-ups in Washington, D.C. were not, according to Haycox. Brady's superiors warned him that Reynolds was up to no good. But the governor ignored their warnings.

A special investigator finally was assigned to check into Reynolds' business dealings, and it didn't take him long to discover that Reynolds was a fraud.

Brady's steadfast support of his friend cost him his job. The Dept. of Interior called for his resignation, and Brady gave up his office on March 2, 1906. U.S. President Theodore Roosevelt then appointed former naval officer Wilford B. Hoggatt governor to the District of Alaska. Hoggatt became Alaska's governor on March 10.