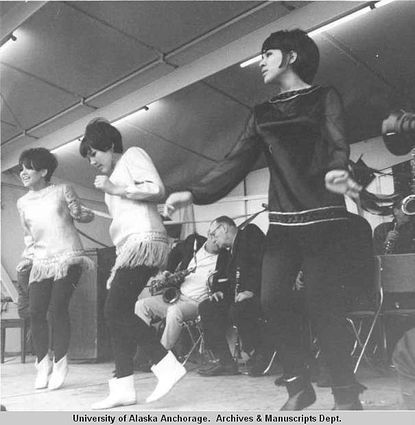 Entertainment at the Governor's Picnic, 1966.

Arlene Schmuland is an archivist who helps people access collections of photos taken in Alaska-photos of soldiers outside Quonset huts, photos of streets and towns the 1964 quake ripped and pulled to pieces, photos of the enlightened people who transformed a territory into a state.

But the chief archivist for the UAA/APU Consortium Library Archives and Special Collections can't stop thinking about all the images the archives doesn't have: the ones tucked in albums, packed away in attics here and out of state, and especially the photos that never were taken in the first place.

"It's socioeconomic, in most cases," she said. "Fairview, Mountain View, all these communities are so underdocumented. How many languages are spoken in the Anchorage School District, yet so much of what we have is coming from mainstream rich white people."

Schmuland and assistant archivists Gwen Sieja and Veronica Denison are launching an effort to gather those elusive photos and show people that archives can be much more than collections of papers and photos in boxes. They can be alive with images: glimpses of Alaskans caught in the midst of their everyday lives – dancing at their neighborhood festivals, celebrating in churches, enjoying picnics or fishing trips.

And most important, these images can be made available online in Alaska's Digital Archives.

"Everybody's got a cell phone now but 50 years ago, in some of the villages of Alaska, the only people who would have cameras were tourists and visitors," she said. "The communities weren't documenting themselves because they wouldn't really have had a mechanism to do so. A lot of that gets lost later or blurred behind the bias of somebody who's not from there."

Mountain View is one example, she said.

"You say Mountain View to somebody who doesn't live in Mountain View, they're thinking poor, rundown, shootings," Schmuland said. "But there's still a vibrancy in that community. So anybody else going in and taking pictures is probably going to be doing it through that lens of the negative, whereas the people who live there may see it very differently and have a totally different perspective on life in that community-people documenting themselves rather than letting other people do it."

It's hard to foresee what researchers now and in the future will want, and why, Schmuland said.

"I've kind of given up on predicting what use will be made of materials," she said. "My first summer here, I started getting request after request for Alaska Repertory Theatre records, but just one section of it. It was Kate Mulgrew starring in a production of The Philadelphia Story. But I didn't know that at first. All I knew was that I had a bunch of Trekkies emailing me for photos. What the heck!"

Then Schmuland realized Mulgrew had played a role in Star Trek: Voyager and was starring at that time in a biography of Katharine Hepburn.

These Trekkies had discovered by searching the web and using the archives' finding aid that Mulgrew had been in Anchorage starring in a production of The Philadelphia Story, and they wanted photos of the production.

"I swear I spent half my summer copying photos of Kate Mulgrew in The Philadelphia Story for an international audience," Schmuland laughed. "All these fan clubs for three months descended upon us. Of all the thoughts I would have had about all the various uses the Alaska Rep[ertory] materials may have been put to, Star Trek fans were not in that list!"

Chronicling past moments and places

Schmuland wants to reach out to people living in urban and rural Alaska, and to Alaskans now living Outside, to let them know photos in their collections might be important to researchers someday.

It's an archivist's job to think about the possible uses to which something may be put and whether to keep it, based on its potential research use. For example, Schmuland said, the archives likely doesn't need more photos of Denali...or of sunsets.

But a photo containing some context, a connection to a particular community or highlighting a change that's occurred in that community has much more value to a researcher.

A woman once told Schmuland about a VHS tape she had of photos someone in her family didn't want to throw out. When the woman sat down to watch the tape, she saw a photo of a family picnic and wondered why anyone cared about that. Then she saw why.

"They were seated in front of the 'Road Ends' sign and the road ends down by Girdwood back when the Seward Highway didn't continue through," Schmuland said. "Probably too many people didn't just drive down there and take a picture of that sign. And now it goes through and we assume it's always gone through, but it hasn't."

Schmuland, Sieja and Denison plan to host an event at Archives and Special Collections from 11 a.m.-4 p.m. Oct. 15, inviting people in the community to bring in up to three images to be scanned and possibly included among the 14,000 photos now kept in Alaska's Digital Archives.

Want to learn more about the UAA/APU Consortium Library Archives and Special Collections and its Sharing Community Images project? Check out its blog at https://www.consortiumlibrary.org/blogs/archives/2016/04/01/sharing-community-images-project/. 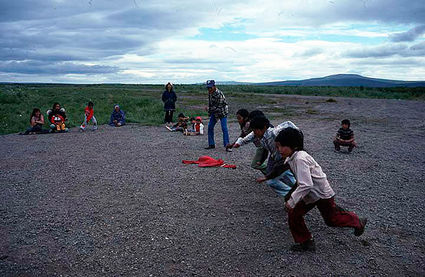 Four boys start a foot race while adults and other children watch, during Fourth of July festivities in Buckland, 1976.

Tracy Kalytiak works in the UAA Office of University Advancement. Reprinted with permission from UAA Green and Gold News.