For travelers who revel in wild and weird 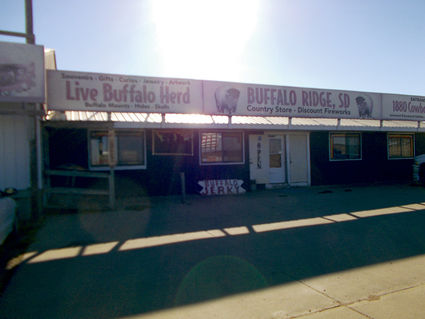 We've all had them, those that hit the road for long stretches. And naturally in Alaska, where drives can stretch for days, scary road trip experiences are something we all share.

Like that night at 2 a.m. in a blizzard traveling the windswept road across Kluane Lake in the Yukon, and through frighteningly named Destruction Bay in British Columbia, where my night was spent at a motel with no proprietor, just an envelope and keys to the rooms (chair up and under the door knob for security, thank you).

Or the sheriff fondling his pearl-handled gun in its holster in a convenience store somewhere in the Ute Mountains of Colorado because, well, he just didn't know me

Or the time I tried to make the 18-hour drive to Skagway from Anchorage one winter and had to pull over four miles short into a truck pull-off and sleep in my sleeping bag surrounded by idling semis.

But there were other trips so incredible that I replay them in my mind and bore my friends with.

Like driving to Fairbanks from Anchorage one New Year's at minus-55, realizing I forgot to put that piece of cardboard over the radiator and hearing the engine sounding like a small airplane, but passing Denali after sunset and seeing a meteor shoot over the summit

And there was that small herd of caribou in Nilchina crouched behind bushes waiting for me to pass.

The good thing is Alaskans tend to look out for each other on the road. You can tell someone's from Outside when they do not stop for a vehicle pulled over to the side of the road. Especially in winter, checking is just a courtesy, like stocking a remote cabin with food and fuel in case some poor lost soul needs it.

But one of the most disturbing incidents was the fall of 2012, when we stopped at the tourist attraction/souvenir store/restaurant at Buffalo Ridge, South Dakota.

I like to look for places to eat off-highway, becoming tired of McDonald's and Burger King, so we took exit 390 off I-90, and went west a quarter-mile on Highway 38.

The buffalo burgers attracted us, but the semi-historical exhibit pulled us in and eventually repelled us.

We toured the 1880s ghost town out back with battered buildings that included a fort, Comanche the Ghost Horse, a Chinese laundry, a haunted mine, and of course, a saloon. Even Abe Lincoln is here, giving a speech outlining his connection to South Dakota, when in 1862 he allowed the execution of more than 300 Dakota men convicted of war crimes in Minnesota's Great Sioux Uprising, some of whom were thought to be innocent.

We viewed only one of the animatronic exhibits in the restaurant, where you dine at a table surrounded by dingy and dusty post cards, fake Native American items for sale, and fireworks.

For a quarter slipped into a slot, a gigantic orangutan (I think) played "Hello My Baby," on a player piano. It haunts me still. 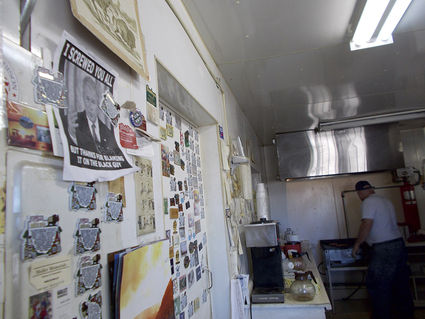 Proprietor Dean Songstadt cooks a buffalo burger in the kitchen.

However, the buffalo burgers were excellent, but again there was a creepy note to them. The store sells buffalo meat from the herd out back and they seem to know it, looking out mournfully as you enter.

But push on and taste what so many earlier Americans had as a staple – much like Alaska's caribou, lean and tasty.