The first Miss Alaska was a favorite 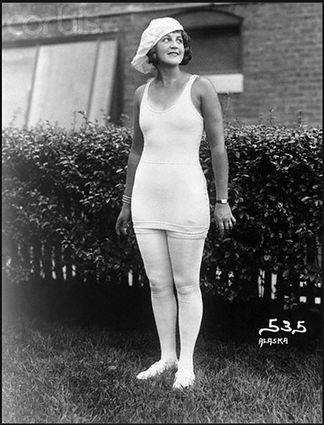 Helmar Liederman, originally from Sweden, became the first Miss Alaska in the early 1920s. Her tight-fitting one-piece bathing suit was daring for the era.

Dubbed The Arctic Venus by newspapers across the globe, Helmar Liederman turned many heads as she strutted her stuff in 1922 during the Inter-City Beauty Contest – forerunner of the Miss America Pageant. The 23-year-old beauty, who immigrated from Sweden in 1921, proved to be one of the most popular contestants of the 57 that entered the Atlantic City event. Only 10 girls had competed in the inaugural contest the previous year.

"A real beauty from the north country, Miss Helmar Liederman of Juneau, Alaska, is a striking type with luxurious brown hair and skin browned by constant exposure to the elements," reported the papers. "An all-round lover of sports, Miss Alaska made the long trip from her native town by dog sled, hiking and automobiling to reach the famous seaside resort of Atlantic City, New Jersey."

Atlantic City had initiated the beauty pageant in 1921 as a way to generate national publicity and put a new light on its tarnished image. During the 1920s, the resort community was filled with gamblers, prostitutes and bootleggers – not to mention crooked cops and politicians who were happy to look the other way if the price was right.

Local newspapers sponsored various beauty pageants and used photos of the contestants to boost circulation. The news photo shown with this article featured Liederman, who had been sponsored by the Alaska Daily Empire in Juneau, wearing a white, tight-fitting one-piece bathing suit – a daring outfit for this era. Her tanned body and muscular physique gave her an "undercurrent of sexuality," according to one magazine.

Liederman did not win the pageant that year, but she again entered the contest in 1923. Based on her reception the year before, the stunning beauty was filled with optimism that she would place well. However, a few days before the pageant, the Atlantic City Sunday Gazette reported that officials had banned her entrance into the pageant.

The newspaper reported that pageant director Harry L. Goshall had "raised the question that the fair entrant was married, that the Alaska newspaper had not been given authority to conduct a contest and had failed to 'elicit information required to officially enter a contestant.'

While Liederman was indeed married, there was no formal prohibition against matrimony anywhere in the official rules at that time. And she produced a letter of support from the Alaska newspaper. But the director's disqualification stood.

It is interesting to note that Liederman actually lived in New York. How she got the Alaska Daily Empire to sponsor her is a mystery.

Journalist Frank Deford later wrote a book about the Miss America Pageant titled, There She Is: The Life and Times of Miss America (1971). He interviewed Godshall about those early days and Liederman.

"She had never seen Alaska," Godshall asserted. "She was the wife of a fellow by the name of Earle Liederman, who was a physical culture expert looking for publicity. Where she got that letter from the Juneau newspaper, we never knew, but we were damned sure not going to Alaska to find out."

Liederman later addressed the controversy about her Alaska ties in an article published in the New Zealand Truth.

"As for the charge that I am not a resident of Alaska, that is absurd. My brother is a hunter and trapper there; I have lived in Alaska for years and have become so acclimated that I have taken my daily plunge in the Copper River, with the Childs Glacier in front of me, and the temperature of the water thirty above."