Thirty years as an Alaska photographer 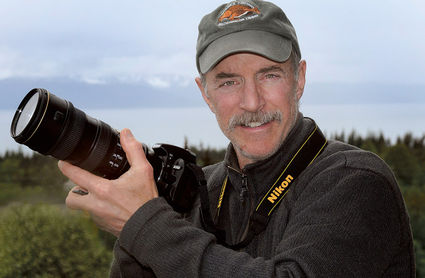 Longtime Anchorage-based photographer Jim Lavrakas now lives in Homer and has published a book compiling his photos and the events and stories behind them.

"It's a history book, a photo book and a memoir – all in one." That's how photographer and storyteller Jim Lavrakas describes his book, "Snap Decisions: My 30 Years as an Alaska Newspaper Photographer." He's just released a second edition of the book originally published in 2012, and has included some updated stories and new photos.

Jim comments on his motivation for the book, when he first thought of putting it together back in 2010.

"I had left the Anchorage Daily News as a staff photographer two years earlier, and I realized I was forgetting some of the stories and photos that had been so important to me. I decided that the best way to recover all that would be to put a book together. It's a long, complex process, but I've been very happy with the result.

"I'm a senior myself," he continues, "turning 64 in September. As I was recounting the stories behind the photos for the book, I realized that in many ways I was telling the history of Anchorage and Alaska, from the early 1980s through the first decade of the new millennium. Much of the writing reveals the 'back story' of the photographs.

"Each two-page spread has a theme related to a news or feature story, a portrait or travel photo, photos from the Iditarod. Then I include my personal observations, telling what was going on in Alaska at the time of the photo, what my assignment as a news photographer was about, how I grew as a journalist. I've found that when people who have lived many years in Alaska see the photos, they can jog a memory and the stories come back to them."

While Jim was on the staff of the Anchorage Daily News, Richard Murphy was the photo editor. He helped Jim choose and assemble the photographs for the book, and in seeing the results, he states, "It was an honor to work with Jim Lavrakas, and it is a joy to see these wonderful photographs get a second life in this book."

Since leaving the staff of the Daily News eight years ago, Jim reflects on what life felt like in a kind of retirement, creating a "second life" for himself.

"I think I more or less resurrected myself after that career. Looking back, I realize that I was a little depressed when I left the newsroom. It was an exciting environment working under pressure, meeting deadlines. Each day was new. I never knew what kind of assignment I'd be getting, what I'd be seeing, what interesting people I'd be meeting. I really felt a part of the Alaska community, and I loved that."

Obviously Jim found a new career as a book author, and there is now a new life in Homer, where Jim runs fishing charters in Kachemak Bay.

"Yes, I still take lots of photos, of the Bay now, doing commercial photography for the charter business. I take the photos in the summers, then work on them in the winters.

"I know I've grown personally and as a photographer over the years, and photography has grown so much as well. I now do a lot of creative work digitally. There are so many new things possible in photography today, things I could never do back in the newsroom."

Asked what qualities are most important for a good photographer, Jim responds rapidly. "Curiosity. If you are not curious, you cannot respond with fresh eyes, see what is different in the scene before you. Of course, you need to know your tools so that using them becomes second nature. What's before you may be fleeting. You don't want to stop and think through the mechanics of taking the photo of what's before, stopping the creativity."

It's that same creativity and curiosity that he feels are important for anyone pondering retirement or recreating themselves in a later-life career.

"I'd tell them to try something different. Volunteer doing something different from what you did during your professional years. I branched out to public radio, KBBI Kachemak Bay Broadcasting, doing a bit of volunteer staff work for them. And I was on the board of directors of the Chamber of Commerce here for three years."

Photo editor Richard Murphy would add another 'C' to what has made Jim successful. In addition to creativity and curiosity, he mentions Jim's caring. Sure, he could sniff out breaking news and be at the right place at the right time, but he comments, "Jim's skills . . . run deeper than his ability to chase breaking news. He relates to people across the social spectrum from governors to street people, but he has a particular sensitivity for the common man. Jim cares, and people sense that."

Caring and respect for the subject before him allowed Jim to get into places and situations to take photos not available to others. 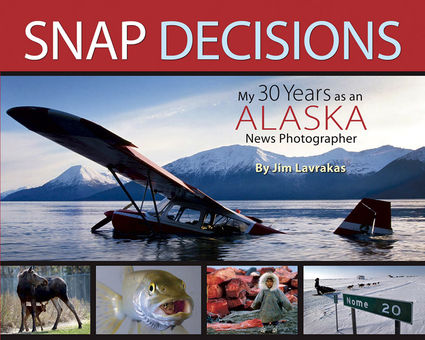 Jim Lavrakas' new book chronicles the stories behind some of the outstanding photos he took during his career as a staff photographer at the Anchorage Daily News. "I've found that when people who have lived many years in Alaska see the photos, they can jog a memory and the stories come back to them," Lavrakas says.

"I often had just 15 minutes to enter someone's life, often at times of great stress or trauma. I had earned the trust of the police or fire department, being allowed access to dramatic situations. I knew the photo I was taking would have an effect on people, and I didn't want them to feel used."

A visual and literary treat

In Jim's book, "Snap Decisions," that caring, creativity and curiosity are all on display in words and images. James Colton, photo editor for Sports Illustrated, reviewed the book by stating, "Powerful images and back-stories make "Snap Decisions" both a visual treat and a great read."

It can help anyone see Alaska with new insights, and it may be a memory jogger for those of us who have lots of Alaskan years to recall.

Snap Decisions is available on Amazon for $18.50 or it can be ordered from Jim's website, FarNorthPress.com, for $16.50. He adds, "That includes shipping, and I will autograph it and personalize it. They make great Christmas presents for fellow Alaskans, and Alaska corporate gifts, too."