Arctic Brotherhood was born on the high seas 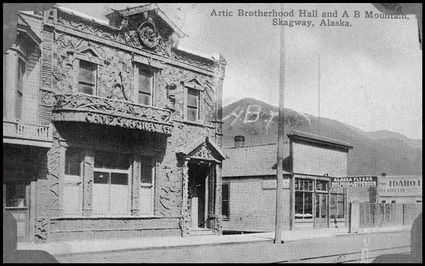 This postcard from 1912 shows the first lodge of the Arctic Brotherhood, with driftwood placed on the façade, as well as a mountain behind with the letters AB prominently painted on its side in Skagway. A note on the back of the photo states: "Only 'sourdough' Alaskans may be members of this lodge."

This fraternal club, which at its height boasted around 10,000 members in the early 1900s, was the brainchild of sea captain William Connell, a hospitable man who had a reputation for keeping company with his passengers aboard the steamer, City of Seattle. On this particular voyage from Seattle to Skagway, he and a group of Klondike gold-seekers were having a great time as they shared stories, as well as liberal amounts of alcoholic libations, in the ship's dining room.

"We should form a great social brotherhood of the North where men from all parts of the world could meet and get to know one another," Connell told his new comrades. The 11 men seated around him whole-heartily agreed, according to Arctic Brotherhood historian I.N. Wilcoxen, who in 1903 described that original meeting.

"Being liberal of purse, and always enjoying the best obtainable, they ate, smoked and drank liberally of the best the Steward had. They found they were 'Arctic Brothers,' and proposed to celebrate the discovery by a night of revelry, mirth and laughter."

And while enjoying their newfound friendships, the men drafted up the bylaws to their club and the rules of order. The preamble to the fraternity's constitution stated:

"The object of this organization shall be to encourage and promote social and intellectual intercourse and benevolence among its members, and to advance the interests of its members, and those of the Northwest section of North America."

The rules restricted membership to white males more than 18 years old who lived in Alaska, the Yukon Territory, the Northwest Territory or British Columbia north of the 54th parallel. The men also decided that membership into their elite club could only be achieved if a candidate was nominated by a member in good standing and that said nomination had to be approved by a membership committee.

Since the idea for this one-of-a-kind northern fraternity was born during an evening where liquid spirits liberally flowed, it is no great surprise that the first badges for the officers were champagne corks and ordinary members wore beer corks.

The men settled on an initiation fee of $1 to be used on "a royal good time," according to an article written by Ken Spotwood for Dawson's community newspaper, The Klondike Sun.

Soon after the ship docked, the founding fathers established Camp. No. 1 in Skagway. They also created an official emblem for the Arctic Brotherhood that featured two crossed flags – the English Union Jack and the American Stars and Stripes – along with a miner's gold pan that had a crossed pick and shovel with the letters A.B. emblazoned upon it. Gold nuggets encrusted the entire design with the motto: "No Boundary Line Here."

No boundary line, indeed. These original members took off toward the gold fields of the Klondike and spread their message of friendship and camaraderie. Within a month, their membership numbered more than 300. They established Camp No. 2 at Lake Bennett and Camp No. 3 at Atlin, B.C. It wasn't long before they had 30 clubs going throughout the North Country.

The Arctic Brotherhood was generally a social club for adventurers, but it also included doctors, celebrities, elected officials (both American and Canadian) and lawyers like the honorable James Wickersham. The AB lodges didn't just have drinking parties, they also took care of members when they were sick, buried those that died and worked toward improving conditions in the mining camps. The club appears to have disbanded around 1931.