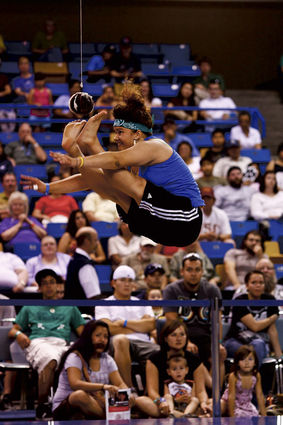 The World Eskimo-Indian Olympics' two-footed high kick competition is a testimony to strength and agility.

I'm not watching the Olympics in Rio this summer. And yes, I know that these athletes have trained and competed since childhood to be able to represent their country and gain lasting glory.

I understand this because as a child I wanted to be the next Sonja Henie. That is, until I understood what her sympathies with Hitler and Nazi ideology meant. I still have routines and costume designs playing in my head.

Recent Olympics have caused massive inequities in host countries that have affected mostly poor people and destroyed small neighborhoods and villages near the site of the Olympic "village."

For the 1996 Games, Atlanta relocated 6,000 residents of public housing because they were close to the Olympic site.

The Games in Sochi in 2014 saw the Russian government bulldozing homes without compensation.

This year in Rio de Janeiro, residents in small communities called favelas were forced to abandon their homes without compensation except for the ones who refused and were given a paltry sum. That story was on the front page of the Washington Post but disappeared after one day.

Then there was the poop in the bay, the green pool water, the toilets that didn't work at the Olympic Village.

Here is my simple suggestion: Bring the games back to the source – Greece. And I'm not saying this because I'm of Greek descent, but because it makes historic sense. Then have countries that participate in the Games take turns hosting it in alphabetical order, with a percentage of the profits going to the host country, not Greece, for social programs through a recognized international non-profit to make sure the money doesn't disappear.

Another reason to choose Greece, the Greeks have welcomed the recent flood of Syrian refugees with open arms because they understand what they are going through after Greece's post World War II tumult and civil war between the royalists and the communists. It was at that time when the British, fearing a communist government and supportive of the king, blocked Greece from receiving humanitarian aid.

It was students at Oxford University in England that began OXFAM, a combination of Oxford and famine, to help bring the famine in Greece to international attention and to send help. Perhaps OXFAM should receive that cut of the profit.

I did watch the final ceremonies, but every time a firework went off, I thought, "That could have been a meal for someone or an innoculation or books for school."

Alaska has its own Games

The World Eskimo-Indian Olympics tests youth from across the state and the circumpolar region in traditional pastimes most likely thought up during the long winters for amusement. 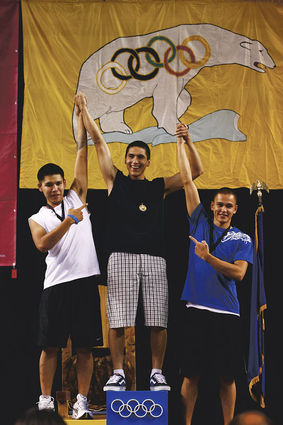 Just like the International Olympic Games, the World Eskimo-Indian Olympics held each year in Alaska presents gold, silver and bronze medals and a winners' stand.

One mind-blowing competition is the two-foot kick where a ball is suspended from a string and the winner is the one who, as the string is raised higher and higher, jumps and hits the ball with both feet. I dare you to try it!

Or cringe in sympathetic pain while watching the knuckle hop as a contestant gets into a plank position and propels themselves forward on just their balled-up knuckles, imitating the movement of a seal for as long as they can.

There's the ear pull where two competitors sit on the floor with their legs out and have a string of sinew looped from one person's ear to another and they try to see who can pull the sinew off the other's ear or who gives up first. This is a real owie.

For those attending, it's old home week when they get to see relatives and friends from across the state - it's village life brought to town.

The games are held over four days close to a weekend in mid-July in Fairbanks. Information can be found at http://www.weio.org. Mark your calendars now.