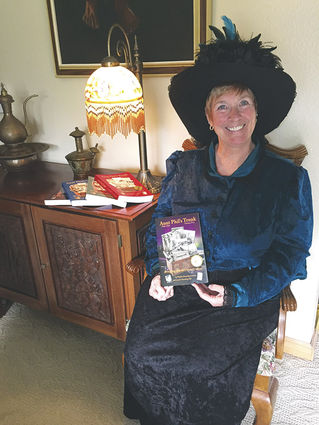 Laurel Downing Bill holds one of the books in her five-volume series, "Aunt Phil's Trunk." She is wearing one of six period outfits she wears when making presentations or signing books.

"I never expected this."

That's how Laurel Downing Bill summarizes the turn her life took many years ago when she got a phone call from her sister, Meredith.

"I've got some stuff here," her sister told her. "It's papers, clippings, photos from our aunt, Phyllis. You can come over and see what's here. If you want it, great. If not, we can pitch it."

Their aunt, Phyllis Downing Carlson, a lifelong Alaskan, had died in 1993 at the age of 84. She'd been a school teacher and research librarian at the old Loussac Library in downtown Anchorage. And, yes, she collected stuff – files full of Alaskan history, collections of old photos, research papers focused on stories from days long gone by in Anchorage and Alaska. Aunt Phyllis had been a prolific writer, dedicated historian and collector of ideas.

"Within three months of reflecting on the extent and value of this material, I knew I needed to share it. I knew it could be my family's gift to Alaska."

It became a compulsive pursuit. But there were some problems.

"My husband, Don, and I had moved to Anchorage in 1998 after 24 years working and raising a family in King Salmon," Laurel said. "We were going to retire – play golf, fish, go bird watching. 'I think our plans for retirement are over,' I told Don."

She knew sharing what would become Aunt Phil's Trunk, a series of books, was her calling.

But how to do that? In what she calls her previous life, Laurel's writing experience had been in cranking out business letters. Moving around Alaska, she'd worked as a bookkeeper and a secretary, and in management for the Bristol Bay Telephone Cooperative.

"I knew I'd need more skills to write effectively and organize all this material."

By 2003, she'd powered through to a degree in journalism with a minor in history from the University of Alaska Anchorage.

"At that point, I was thinking I'd write a book, one book, called 'Aunt Phil's Trunk'. It would be a spin-off of a column I'd written for a much-loved paper called The Anchorage Chronicle, full of local news."

Sadly, the Chronicle had folded in December of 2004, and Senior Voice began carrying the popular column.

"That first book came out in 2006. It goes up to the year 1900. Two thousand copies sold out in two months! I'd searched through the archives of museums, libraries and universities around the country to find photographs to help tell the stories."

I suppose you could say the rest is history.

Volume One turned into five volumes.

"My desire to share Alaska's history had turned into a passion. Volumes 2, 3 and 4 – released in 2007, 2008 and 2009 – had been flying off the shelves of both major and independent bookstores, as well as gift shops and chain stores across Alaska. Volume 5, covering the years from 1960 to 1984, just came out this year and is doing unbelievably well."

So how does she feel about this unexpected, later-life endeavor?

"This is the most fun I've ever had! I've learned so much and am having a blast! One of the happiest things for me is seeing how young people can love history, the stories. I'd hoped the books would interest people from ages 9 to 99. When a mother comes up to me and says 'My son loves your books' – well, it doesn't get much better than that."

It's not just local school children who love the Aunt Phil books. Just this year, Aunt Phil's Trunk has received two top honors in the 2016 Literary Classics Book Awards. The Aunt Phil's Trunk history books earned gold for Best Historical Nonfiction and Best Nonfiction Series. These awards recognize honorees for their contribution to the craft of writing, illustrating and publishing exceptional literature for a youth audience. Laurel will be traveling to Las Vegas to receive the awards on Oct. 15.

Now that she feels confident that she has put writing the Aunt Phil series to rest, I asked Laurel what she thought her next project might be. 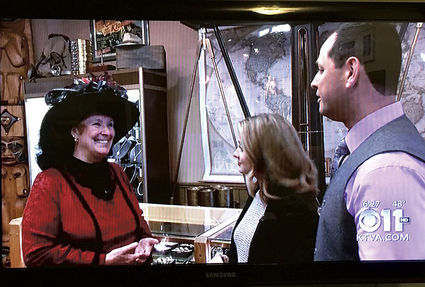 Laurel Bill talks with Anchorage TV "Daybreak" morning show hosts Megan Mazurek and James Gaddis during a Sept. 22 segment filmed on location at the Alaska Mint. She is a weekly guest on the show. Her monthly column has appeared in Senior Voice for 12 years. She hopes to expand her public appearances and awareness of the books into the Lower-48.

"I'm hoping that the national awards in Las Vegas and the Vegas Valley Book Festival held in conjunction with them may draw attention to the books nationally. There is a lot of interest in Alaska, and I'd like to share its history with a national audience.

"I'd love to travel the Lower 48 and make presentations. That would be my 'when I grow up' dream."

"You never know when your secret passion is going to surface. Mine came rather late in life. And just think -– it all started with one phone call –'Auntie thought you might be interested in all this stuff some day.'"

To learn more about the Aunt Phil's Trunk series and how to order the books, visit the website, AuntPhilsTrunk.com.