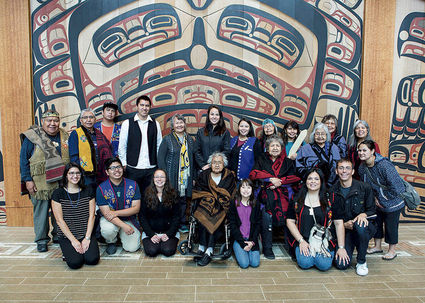 SHI held a graduation ceremony in August 2016 to commemorate three years of work by Tlingit language mentors and apprentices enrolled in our mentor-apprentice program in Yakutat, Sitka and Juneau. The ceremony marked the end of a week-long immersion camp, which was attended by mentor-apprentice teams and language teachers from other communities as well.

Sealaska Heritage Institute (SHI) has received a large federal grant to revitalize the languages of the Tlingit, Haida and Tsimshian in four Southeast Alaska communities.

The $927,000 award from the Administration for Native Americans (ANA) will fund four mentor-apprentice teams of Lingít (Tlingit), Xaad Kíl (Haida) and Sm'algyax (Tsimshian) speakers and students in Metlakatla, Hydaburg, Sitka and Juneau to study the languages over three years.

The program, "Haa Shuká: Voices of Our Ancestors Through Our Elders, Current and Future Speakers," will build on the institute's previous language revitalization efforts, including a Tlingit language mentor-apprentice program that recently ended, said SHI President Rosita Worl.

"We learned a lot from our recent Tlingit language mentor-apprentice program that we will incorporate into this expanded effort," said SHI President Rosita Worl. "The language program has to be community-based and we found it is important to have a regional language committee empaneled by people who are envisioning the future of language programs and who keep tabs on all language work region wide."

Through the grant, SHI will establish a Native Language Committee and appoint committee members from partner communities to serve as liaisons. Each mentor will be teamed with two apprentices, and the teams will immerse themselves in their respective languages over the course of three years. Their studies will be supplemented by language, orthography and transcription courses through the University of Alaska Southeast, which collaborates with SHI on projects through a memorandum of agreement. Intermediate and advanced apprentices will also transcribe hours of language recordings and documents and the transcriptions will be made available to other students through an online database.

"In recent years, we've had intermediate speakers transcribing language recordings in our archives, which includes more than 5,000 recordings, most of which cannot be found in other libraries or archives," Worl said. "What we learned from that is how helpful it is to students to go through that process of transcribing-it accelerates their learning."

Sealaska Heritage Institute is a private, nonprofit founded in 1980 to promote cultural diversity and cross-cultural understanding through public services and events. The institute is governed by a Board of Trustees and guided by a Council of Traditional Scholars. Its mission is to perpetuate and enhance Tlingit, Haida, and Tsimshian cultures of Southeast Alaska.