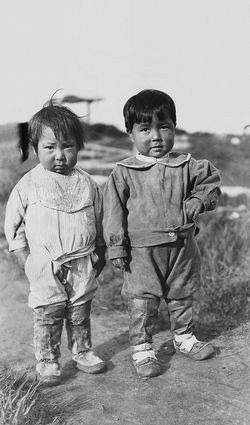 Many of the photographs in the book are portraits of people that show the clothing residents wore in daily life and while hunting, and they document traditional and Western wear, said Norbert, adding that one photo shows "shows two precious two-year-old cousins donning both Inupiat and store-bought clothing."

The book, which was compiled and written by Menadelook's granddaughter Eileen Norbert, gives both a pictorial and Native perspective on Inupiat traditions and historical events, said SHI President Rosita Worl, noting the book stems from SHI's advocacy program, which is part of SHI's effort to promote Alaska Native arts, cultures, history and education statewide.

"Photographs of Inupiat life in the early twentieth century are rare and photographs taken by an indigenous person are nearly nonexistent," Worl said. "This book provides a unique glimpse into the world as lived by the Inupiat during that time."

Menadelook was born in Wales, Alaska, in 1892. One of the first Alaskan Natives to become a teacher, he taught in Diomede, Shishmaref, Shaktoolik, Kotzebue, Noatak, Sinuk, Nome, Gambell and Unalaska.

Norbert meticulously researched and recorded the stories behind the photographs. The text is based on interviews with Menadelook's children, his sister, other relatives, former students and Elders, as well as school reports, correspondence and other materials.

The book was published in association with the University of Washington Press and will be carried in stores and also may be purchased through the Sealaska Heritage Store in Juneau and through Norbert.