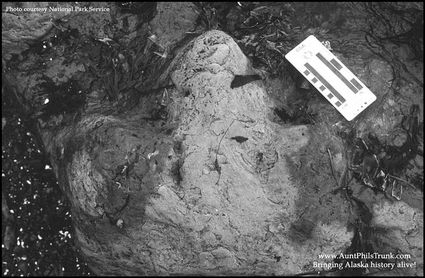 This photo shows the footprint of a hadrosaur, also called the duck-billed dinosaur. The first evidence of dinosaurs in any national park unit in Alaska were those found in Aniakchak National Monument.

My two-year-old grandson is crazy about dinosaurs. So much so that we decorated his birthday cake with small brontosaurus, nanosaurus and T-rex replicas. He received an abundance of dinosaur-themed gifts, too, including dino sippy cups, dino books, dino imprinted T-shirts and a multitude of dinosaur toys.

I went to bed that evening and dreamt about dinosaurs all night! When I woke up, I still was thinking about T-Rex and his buddies. Then something rang a bell in my memory bank about dinosaurs once inhabiting Alaska.

Gary Stricker and Henry Roehler, geologists with the U.S. Geological Survey, were searching for coal when they found fossilized footprints, along with skin impressions of the prehistoric beast, along the Kokolik River in northwest Alaska, about 150 miles north of Kotzebue. Reports of the time stated the discovery was the northernmost evidence of dinosaurs ever found in the Western Hemisphere.

These dinosaurs were from the family of unarmored, herbivorous hadrosaurs, also called duck-billed dinosaurs. They were bipedal and had heavy hind limbs and tail. Hadrosaurs were amphibious, had webbed feet and could feed underwater. These big boys had no defense against carnivores – other than to escape and lay in deep water.

Hundreds of dinosaur and bird prints also were found in Denali National Park and Preserve in 2005. Researchers saw the fossilized prints in rocks that formed 65 million to 80 million years ago – during the Late Cretaceous Period.

Another major dinosaur site was discovered nearly inside the Arctic Circle in summer 2013. Scientists from the University of Alaska Museum of the North found thousands of fossilized dinosaur footprints, large and small, along the rocky banks of the Yukon River.

"We found dinosaur footprints by the scores on literally every outcrop we stopped at," said expedition researcher Paul McCarthy with the University of Alaska Fairbanks in a statement later issued. "I've seen dinosaur footprints in Alaska now in rocks from southwest Alaska, the North Slope and Denali National Park in the Interior, but there aren't many places where footprints occur in such abundance."

The university's museum curator told the press that such a huge and varied find was rare in this day and age.

"We found a great diversity of dinosaur types, evidence of an extinct ecosystem we never knew existed."

So how cool is that? Alaska once was a tropical area where dinosaurs roamed and fossil evidence proves it. I love that I now can share some Alaska history with my California grandson ... even if he is only two.