The pastor and his pups 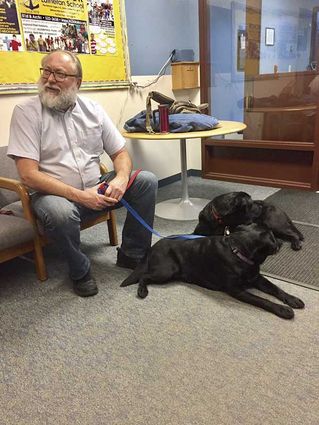 Pastor Dennis Morner and his therapy dogs, Max and Nyxie, wait at the front doors of Anchor Lutheran School to greet students.

They were going to work on Monday morning, so they'd had their nails done, and special attention had been paid to their grooming on Sunday evening.

Then early on a grey, grim November morning they waited inside the front doors of Anchor Lutheran School, taking up their post as welcoming greeters. Max and Nyxie, two English Black Labs, were jubilant, on the job.

They are two of Dennis Morner's therapy dogs, and he has brought them to the school for over five years. He had been the pastor of Beautiful Savior Lutheran Church for 14 years, called from Arizona in 2001 to the church that houses the school. He left that ministry in October of 2015.

But don't call him retired.

"I don't believe in 'retired'," he is quick to tell me. "Working with these dogs is just a change in my ministry. This is my ministry now; the dogs led me to it, and the Lord opened the door. It's my way now of being of service, of connecting to the community."

As the doors opened to the school that morning, big smiles spread over the faces of the children, putting a spring in their Monday morning steps. "Look! The dogs are here! Can I pet them?," one small boy wanted to know. "I usually bring treats for them," he grinned, softly patting both dog heads. "I love having the dogs here. I know they love me!"

Dennis Morner encouraged these greetings, holding on to the dogs' leashes and smiling at the kids. I sat beside Pastor Morner on a bench by the door, watching the transformation of the chilly grey day outside, changed by the mood-altering welcome of these warm and furry canines. Max and Nyxie waited eagerly inside to do their job.

There was some wild tail wagging, but the dogs were trained to know their place and stayed by our bench.

This was their first assignment at the school that day. They also often come there to be reading buddies in the third grade classroom. Just Nyxie would be assigned to this job that day.

The children were already paired with a reading partner, sitting on the floor with their books, as the three of us entered the classroom – Nyxie, Pastor, and I. It was apparent that they were used to the dogs coming to school as classroom helpers. They looked up briefly with happy faces, but continued reading quietly out loud to each other.

Nyxie, too, knew there was serious work to do. She curled up on a carpet next to the wall, and waited to have someone read to her. Pastor Morner settled in on the floor beside her.

On the board at the front of the room was notice that this would be a special reading session for three classmates. Under the heading, "Pastor and Pup," were three names – Larson, Audrey and Gavin. These three would take turns being paired with Nyxie, the cherished assignment. (I learned that this assignment rotates on different days so that each child eventually is paired with a pup.)

This day, Nyxie would hear facts about dinosaurs from Larson, stories of ticklish monsters from Audrey, and the complex details of ATVs from Gavin. Nyxie seemed equally content to hear about all three subjects, often nestling against a knee, tail wagging softly as a small reader's hand reached out absent-mindedly to stroke her head.

I had a minute to visit with the teacher, Natalie Dean, as the reading session ended and the kids put away their books. (I need to add that Ms. Dean had told them they could now say hi to Nyxie if they wished, and a clump of children scurried over to Nyxie before the dog and Pastor Morner left the classroom.)

What differences had she seen in her classroom since Dennis had begun bringing his service dogs to her students?

"We've been doing this together for five years," she told me. "I've had some troubled readers. They are much more comfortable reading to the dogs. They are so very excited when it's their turn to read to a dog.

"One child a few years ago had been coming to school each day, angry, feeling pain. The only way I could get him to work was to be with one of the dogs and move beyond his pain. He loved them. I love having them here, too. If kids get slobbered on, I tell them the slobber means love – extra love!"

The impact of Dennis Morner and his service dogs has moved beyond the classroom. There is now another Black Lab at the school, a cousin to Max and Nyxie, Deacon is a permanent daily fixture in the principal's office. Allison Chandler, now Anchor Lutheran School administrator, had watched the calming, positive influence the pastor's dogs were having on the kids. She had begun working there as a junior high teacher.

"I decided to get a dog, to get Deacon. I brought him to the classroom and watched the junior high kids instantly respond. I told them, 'You have to be quiet around the dog!' It worked, so when I became administrator, I brought Deacon into the office. More kids would come there to see him, so I had more chance to relate. If kids were upset, there was the dog – and a box of tissues. It improved relationships all around.

"There was one student, a kindergartner, who had a hard time just walking to her class. She began walking there with a dog. She hadn't talked. I told her she would have to talk to Deacon to tell him things – to come, to sit, to stay. She began to talk."

She smiles and adds, "The dogs bring a cool feeling to the entire building."

I'd watched, just that one day, and I had to agree. I'd caught myself thinking, "Sometimes all anyone needs to be at peace, to be comforted, is a non-judgmental listening ear." It doesn't matter if it belongs to a gentle, hairy dog.

Dennis was waiting for me at the school's front door at the end of my visit. He and the therapy dogs had other assignments ahead that Monday, and a very full work week ahead, commitments throughout the community. 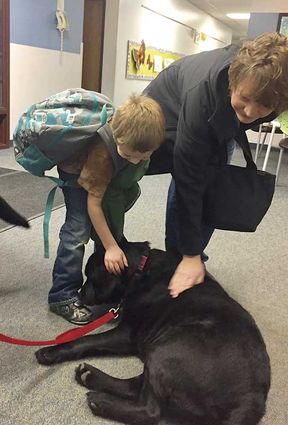 Isaac Dykstra and his mom, Mandi, stop to pat Max as they arrive at school.

That afternoon, they'd be at a Children's Maltreatment Conference. They would be at a local hospital, and with children and adults in hospice care. They might be at AWAIC – Abused Women's Aid in Crisis – to calm victims of domestic violence. They could be in court to comfort people during testimony.

"It's such a rewarding new ministry for me. It can be intense. I have to watch that I don't overdo this work, so I pull back sometimes – for my benefit and for the dogs. They are doing important work, important service."

It's easy to see that with his pups, his therapy dogs wherever they go, Pastor Dennis Morner is anything but retired.

This is the first in several stories about animal therapy. Next time, learn about a pig working special duty at an adult day facility.