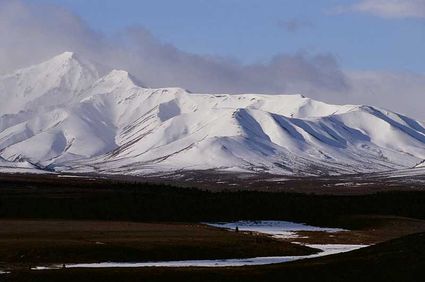 Massive and wild, Mt. Denali is not to be missed -- and is only a few hours north of Anchorage.

As the centennial year for the National Park Service comes to a close, I want to share some of my favorite parks in Alaska because this state has the most parks, the largest park and the most varied geologically.

I know, the parks have "Parkies," not a favorite among Alaskans because they represent the federal government, and that spells bureaucracy, meaning you can't do whatever you want in the parks.

I know, Alaskans have been used to free reign for a long time, but to protect these wild and wonderful places you do have to respect the environment and its resources. Follow the rules - your grandchildren will thank you.

My dad was once caught whizzing off the family's Kachemak Bay cabin by my mother, who told him neighbors might see him. He exclaimed, "This is Alaska, I can do anything I want."

So much to see and just a drive away

OK, OK, like any road trip in Alaska, some parks will be anywhere from four and a half hours to 18 hours to get to, but at least they're on the road system.

The most obvious park you should go to at least once in your life is of course Denali.

I asked a Denali Parkie once if I see the mountain "out," meaning visible from Anchorage, what should I do. "Drive like hell," he said. Just head north on the Glenn Highway to the Parks Highway.

And here's the wonder of Alaska road trips: there's so few roads that you just point your vehicle in the direction you want to go and you'll get there. For Denali National Park, just head north of Anchorage.

Denali is geared for public viewing so there's hotels, restaurants, gift shops and tours galore. Luckily all that civilization is on the road and not inside the park.

There's six million acres of lakes, tundra, peaks and wildlife, with Denali at 20,310 feet towering over it all. Don't miss it.

I drove through there one sparkling clear late December night at minus 54 degrees, and just as I passed a meteor soared over the peak. Magic.

An interesting historical aside here: I was driving through Adams, Massachusetts, which is on the Vermont border, this fall and smack in the middle of town there was a statue of William McKinley waving. This guy got around - except to Alaska. It seems after McKinley was assassinated, the town raised a statue in 1903 to him in thanks for passing the McKinley Tariff Bill, which made it more expensive to buy items manufactured overseas. Sound familiar? A profitable measure for the stockholders of manufacturing companies, like the cotton mills of Adams.

South of Anchorage is America's largest national park - Wrangell St. Elias, a 13.2 million acre whopper. Mount Elias, Canada's largest peak at 18,000 feet, is the eastern point of the park that stretches to the Pacific Ocean.

Close to an eight-hour trip from Anchorage, just take the Alaska Highway south, hang a right towards Valdez just after Glenallen and turn left to McCarthy. The old Kennecott copper mill buildings still stand, but this really is a jumping off place for adventure. Rugged and vast, it's not for those without wilderness experience. For more information, go to http://www.nps.gov/wrst/planyourvisit/directions.htm.

But as long as you're close to Alaska 1, go for another 10 hours through Canada's Yukon Territory, and its Kluane National Park and the backside of Wrangell St. Elias National Park. A brief blip through British Columbia brings you down the South Klondike Highway, over the spectacular White Pass and down to the Klondike Gold Rush National Historical Park in Skagway.

I have a soft spot for this park, having lived there off and on for about 10 years. Yes, it is Alaska's Disneyland, and when the Disney ship is in town, Mickey and Goofy are about. Hey, it's cheaper than going to California. But the brouhaha of tourists and tours in the downtown area is only seven blocks long and there's adventure to be had within walking distance.

Stop in where I used to work at the most photographed building in the state, the Arctic Brotherhood Hall with its driftwood façade, now the city's visitors' center. Local trail maps are available here. It's right across the street from the National Park Headquarters with its own visitors' center, free tours and movies in the auditorium. Most importantly, both places offer bathrooms.

Off the road system, but well worth a visit is Gates of the Arctic National Park north of Fairbanks.

I've been in that park at the village of Anaktuvuk Pass, "place where caribou poop," and the Mesa archeological site on the Iteriak Creek that has shown evidence of occupation between 11,500 and 10,300 years ago.

Both places are breathtaking, surrounded by the impressive peaks of the Brooks Range.

And Anaktuvuk is a sweet little village populated with people who at the age of 10 could drive a ski-doo better than you.

Beware taking off for a walk toward one of the peaks: The scale of the range is so huge that you will, as I did, walk for three hours and seemingly never get any closer. 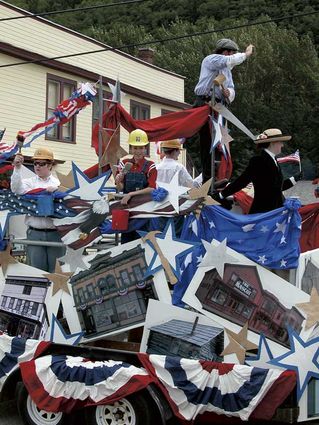 The Fourth of July in Skagway sees National Park Service rangers on a highly decorated float.