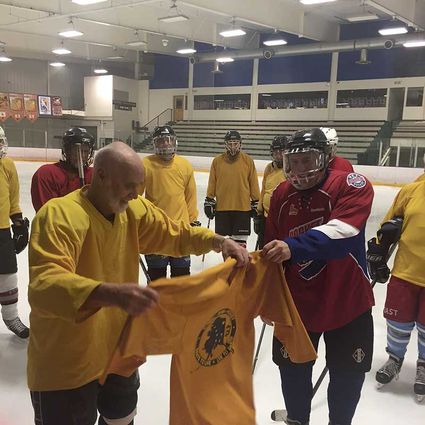 Howard Hansen's Anchorage senior hockey league team surprised him with a special shirt, bearing the number 85, as a gift for his 85th birthday in December.

If I thought I was going to get a quiet, focused interview, I would have been wrong. These guys were here at the Anchorage Subway Sports Centre to play hockey. On this December morning, that was especially true of the star of the day, Howard Hansen, celebrating his 85th birthday. There'd be a surprise celebration for him before the game started in earnest.

Howard meant business. I grabbed moments to talk with him, only when he came off the ice for line changes. Then he'd hurdle the boards and sit with me, answering my brief questions, only until it was time for him to be back on the ice.

"Gotta go!" he'd tell me, leaping to his feet and jumping back on the ice.

Randy Phillips had contacted me to let me know of this special day at the rink. He and Howard are members of the O'Neill-Bush Hockey League, average age 66 or 67, made up of about 40 players. There were about 20 on the ice that day, and they were loud.

"Howard's a special guy," Randy told me. "We wanted to do something for him as he turns 85. We all hope to be skating at his age."

What followed was a rousing chorus of "Happy Birthday." They gathered around for the presentation of a bright yellow T-shirt. "Still alive at 85," they yelled, as Howard pulled on the shirt, with "Howard 85" on the back, and "Skate to Live - Live to Skate, O'Neill-Bush Hockey, USA 50+" on the front.

Then it was down to the business of the game. Players divided into two teams, the yellow shirts against the red shirts.

"I think it's amazing we can do this at our age," Randy confided. "We'll play one hour, no stopping, skating maybe three miles in a game." He smiles, adding, "We're old guys trying to be kids again – just having fun."

Whether on the yellow or red team that day, everyone was rooting for Howard. They wanted him to get a goal.

"Stay up front, Howard! No penalties for you today!" they yelled. "Be there, Howard! That's it!" as he came close to scoring. There was much thumping of sticks on ice as encouragement.

Amidst this boisterous, lively chorus, I as was able to learn a little from Howard when his line was off the ice.

"I grew up in western Washington. There was no ice, so I didn't start skating until I moved to Alaska, when I was 22. There were really no ice rinks then. I was teaching elementary school in a Quonset Hut. The winters were long, and I thought the kids should be active, so I started skating with them in Mountain View. By 1966, I had started a team."

To be continued. "Gotta go!' he yelled as his line was back on the ice.

Now where were we? Howard's back, sitting beside me on the bench.

"I started building rinks and maintaining school district ice rinks around town," he continues. "I had to sneak around a bit at night to the rinks at schools. I was using up hot water to maintain them. Kids would see me coming, and stream over to play. I even built my own Zamboni, out of an old VW, to maintain the rinks." His smile grows wide, remembering.

"My daughter started a team, pond hockey, in the 1990s. I played on a team with my daughter and grandkids – two grandsons - until it got to be too much for me. So I joined this, this hockey league for guys 50 and older. That was about six years ago. Maybe 14 of us are over 70 now. A lot of the guys you see out there have had hip replacements, knee replacements. Me – I'm lucky – no joint problems."

A rowdy cheer makes it hard to hear. Don Bardman on the red team has just scored the first goal of the game. I'm told he is the second oldest in the league, at age 78.

When the rink quiets down a bit, Howard winds up our interview by telling me, "I'll keep playing. Why not? I'll play until I can't jump over the boards – or can't lace up my own hockey skates. I'll target age 90."

I grab some time to visit with league board member, Mel Christiansen. He's played hockey all his life, having driven up to Alaska at age 15, with his driver's permit. He's now 76. 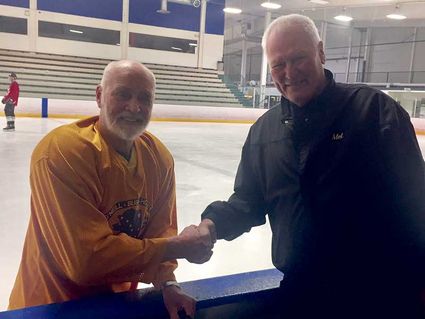 He tells me there are seven board members, responsible for league business such as keeping the roster, scheduling ice time, seeing that payments are made for the rink, that insurance is paid.

He comments that there are no referees – "It's gentlemen's hockey." There are no practices, no coaches. "We're too old for that. And there are no score keepers. We trust the goalies to keep score."

But it's important to go back to the fact that these guys are serious about their hockey. "It's fun, but we live to skate," Randy reminds me. "If it sounds interesting to anyone, there are a few spots open in the league. We play Tuesdays and Thursdays at 11 a.m. and Sundays at 6 p.m. People can call Mel Christiansen at 562-3719 for more information."

I leave the Subway rink with the song "Jump! Jump In," by the Pointer Sisters playing loudly on speakers in the background. It seems appropriate.