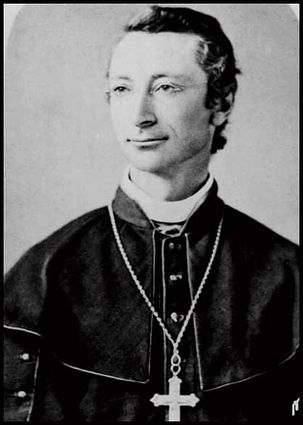 Archbishop of Vancouver Island Charles John Seghers was murdered near Nulato in November 1886.

When Archbishop of Vancouver Island Charles John Seghers journeyed down the Yukon River in November 1886, he had no way of knowing he would never return to civilization. The Catholic priest, who originally came from Belgium, had spent many years doing missionary work in Canada and Alaska.

Seghers first came to Alaska in 1873, as it was included in his diocese. He made five visits to the Great Land and set up a temporary headquarters in Nulato. In 1878, he was appointed Coadjutor Archbishop of Oregon City, according to church records. But Seghers wanted to return to Alaska.

In 1886, along with two other Jesuit priests and a layman named Frank Fuller, Seghers sailed from Victoria, British Columbia, on a journey to the upper Yukon River. After the group reached the confluence of the Yukon and Stewart rivers, Seghers left the two priests to spend the winter there as he and Fuller continued on to Nulato.

Seghers' companions had noted changes in Fuller's temperament during the voyage and told the Archbishop that they were concerned about him continuing the trip alone with Fuller. However, Seghers felt he must push on as eight years earlier he had promised the people of Nulato that he would return.

The Archbishop also was worried about getting established in the region before the arrival of an Anglican priest, who was rumored to already be in St. Michael. Another priest intruding into his territory should have been the least of his worries.

As the two men continued down the river toward Nulato, Seghers noticed that Fuller's mind continued to deteriorate, as did the boat and the traveling conditions. The missionary wrote in his diary on Oct. 16: "Peculiar conversation with (Fuller) in which, for the third time, he gives evidence of insanity."

A month later, the two men and two Native guides who had joined them at Nuklukayet spent the night at a fish camp that today is called "Bishop's Rock." The Archbishop was happy that night, as he believed they would reach Nulato the next day. Fuller, however, appeared agitated, paranoid and sullen, according to the Native guides.

The next morning, between 6 and 7 a.m., the men all arose and readied themselves for the final push to Nulato. For reasons unknown, Fuller fired a single shot into Seghers, who was bent over picking up his mittens. The Archbishop died instantly.

The men carried Seghers' body to St. Michael, where he was buried. Fuller was convicted of manslaughter and sentenced to 10 years in a federal penitentiary.

Many people at the time reflected that Fuller's sentence wasn't much of a punishment. After all, the murderer was sent to do time in the pleasant climate of San Francisco where he got free clothes and free food.

One Alaska Native from the Charley River area thought it might be nice to live in California and have all his needs met by others, as life along the Charley could be tough. So he decided to murder a prospector.

When miners came along and learned what he had done, the murderer told them he was ready to go to San Francisco and live in the "skookum" (strong) house, according to an article titled "Charley River Indian Murders for Better Life" that appeared in the Fairbanks Daily News-Miner on July 20, 1966. He did not get his wish.

The men convened a quick wilderness trial and sentenced the murderer to death. They hanged him on the spot to discourage others from thinking they might get sent to balmy California if they murdered someone.