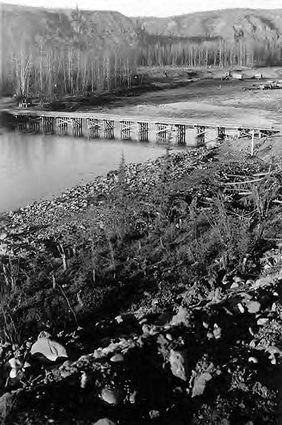 The Sikanni Chief River Bridge, completed in 1943, was the first permanent bridge to be constructed along the 1,600 mile Alaska Highway.

Since the Yukon gold rush days, a road from the lower 48 states (outside) to Alaska had been discussed but it took WWll to jump start the project. The Lend-Lease Act of 1941, which authorized the transfer of military equipment to our allies before the Japanese attack on Pearl Harbor, necessitated the construction of a land link between airstrips in western Canada and Alaska. These airfields were for refueling and maintenance points for aircraft being ferried to Ladd Field (now Fort Wainwright) from the contiguous 48 states. Once in Fairbanks, Russian pilots would continue the journey to the Soviet Union, our ally at the time.

Several routes were under consideration, but the Dawson Creek, BC to Fairbanks was selected for strategic reasons. The coastal routes were considered to be too vulnerable from a seaborne attack as the Japanese invasion of Kiska and Attu later demonstrated. The 1,500 mile project had to be built over and around the permafrost, the Canadian Rockies, muskeg, lakes and rivers that lay in its path.

Army engineer regiments disembarked at Skagway and Dawson Creek in early spring of 1942 to begin the most ambitious project for the United States since the Panama Canal. Over 12,000 Army troops were assigned to the project with a goal of completing the highway within a year. Included in this deployment were Colored Engineer Regiments of mostly conscripted black southern troopers who would challenge the validity of the Army's policy of not assigning southern colored soldiers to cold weather climates and who would pave the way for the integration of our armed forces by President Truman in 1948.

The goal of punching a pioneer road to Alaska would challenge every person and piece of equipment deployed for this vital project. New methods of dealing with permafrost-laden ground and bodies of water that vacillated in depth had to be invented on the spot. Methods for temporarily stabilizing the quagmire of wet soil found in areas of permafrost were tamed by laying small trees that had been felled across the mud, resulting in a method called corduroying. Temporary sawmills were set up to saw and mill the timbers needed to span the many rivers and streams. What seemed like good roadbed would turn out to be muskeg. When the spring sun thawed the ice, the resulting bodies of water had to be circumnavigated. And for goodness sake, let's not forget the mosquitoes and bugs that were so ubiquitous.

Logistical support for personnel and repair parts for the equipment was in short supply. Cannibalization of unserviceable graders, dump trucks and bulldozers for repair parts was the norm and essential if the project was to be finished on time. For years to come, the rusting carcasses of stripped equipment would stand as a tribute to the sacrifices made during construction.

But almost lost to history were the African-Americans primarily from the deep south, who played a pivotal role in the construction project. Black soldiers were in separate units in the Army in 1942 and were relegated to "housekeeping" duties like cooking, cleaning, clerks and guard duty. The Alaska Highway constrution project would change the minds of the Army "Brass" about the capabilities of African-American soldiers.

This year is the 75th anniversary of the completion of the Alaska Highway. To honor the memory of the Colored Engineer Regiment and their contribution to the War effort, The Alaska Highway Project is raising awareness about this lost piece of Black Military History. The project has a GoFundMe website about the effort and a 5-minute film featuring a 101-year-old veteran of one of the Colored Engineer Regiments. Links to other sites and print material are also listed.

Help celebrate Black History Month by getting behind this project that was so vital to Alaska. Visit the website at http://bit.ly/2krSix4

"28 October 1942," by Senior Voice Correspondent Major Mike Dryden is a fictional account of the perils and dedication of the Colored regiments. The historical fiction novel chronicles a young tenant farmer from Mississippi to Alaska. Sgt Aaron Park is in charge of the 95th Colored Engineer Regiment.

The book is on sale at Amazon in print and eBook.