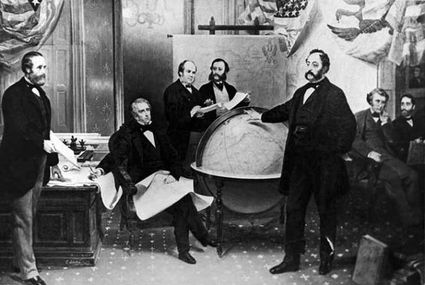 "Russia has sold us a sucked orange," the New York World proclaimed after the U.S. government announced it was to purchase Alaska from Russia for $7.2 million in the spring of 1867. And most Americans agreed with this opinion 150 years ago this month.

The historic decision was greeted with derision and a multitude of catcalls aimed at then Secretary of State William H. Seward. Terms bandied about for the tract of land that was one-fifth the size of the Continental United States included Seward's Folly, Seward's Icebox and Walrussia.

U.S. Congressman Benjamin F. Loan of Missouri openly voiced what many at the time were thinking.

"The acquisition of this inhospitable and barren waste (will) never add a dollar to the wealth of our country," Loan said. "Alaska (is) utterly worthless."

It did not take long for such sentiments to be proved wrong, of course. Alaska had yielded more than $52 million in furs, $50 million in fisheries and $31 million in gold by 1900.

Overtures for its sale actually began several years earlier. The Imperial Government of Russia first approached the U.S. government with a secret offer (some sources say $50 million) to sell its Russian possessions in America in 1859. But before any real negotiations could commence, the nation became immersed in the American Civil War.

Following the end of the war, Seward – who served with distinction in cabinets of both presidents Abraham Lincoln and Andrew Johnson – again began thinking about Alaska. He believed Alaska could serve as a vital link for America in the North Pacific.

And by February 1867, it appeared that Russia would be willing to part with Alaska. Negotiations began in earnest. Stoeckel brought an offer of $10 million to the table. Seward countered with $5 million.

The Russians had expended vast amounts of capital during the Crimean War in a futile struggle with France and England and desperately needed to replenish the royal coffers. So Stoeckel came back with a compromise for "a cash payment of $7 million, with an additional $200,000 on condition that the cession should be free and unencumbered by any reservations, privileges, franchises or possessions by any associated companies, corporate or incorporate, Russian or any other."

Seward agreed to that purchase price. The treaty, which was adopted by the Senate in spite of fierce opposition and almost universal ridicule, was signed that May.

Many years passed before Seward's gift to the nation was recognized. But Alaska's purchase enabled America to become a Pacific as well as an Atlantic power. Before almost anyone else, Seward saw the importance of the Great Circle route; he early advocated a subsidy for a cable line to Siberia via the Bering Sea, and he is quoted as saying in 1846:

"Our population is destined to roll its resistless waves to the icy barriers of the north and to encounter oriental civilization on the shores of the Pacific."

And this was said before the California gold rush sent the relentless tide of gold seekers west, then north.

Seward's prophecy that "Russian outposts in the Northwest would become outposts of the United States" came true. In the land he worked so hard to obtain for America, his name was given to a city, a peninsula, a glacier, a mountain range and a passage. And Seward's Day, celebrated every March 30, is a state holiday to recognize the day on which Seward signed the treaty of Alaska's purchase.