Diane Benson's many roles in theater and life 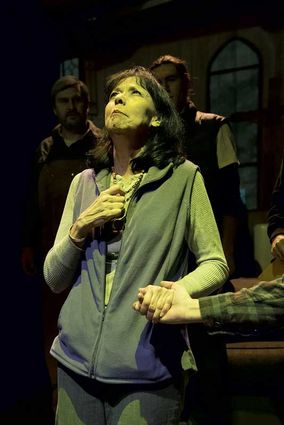 Diane Benson, playing a Tlingit grandmother in the new Perseverance Theatre play, "They Don't Talk Back," grapples with both the joys and agonies of trying to keep three generations of her family together. Off the stage, Benson, 62, is a university professor and former Trans Alaska Pipeline truck driver.

When looking back at her career in theater, Diane Benson shares its surprising beginnings.

"I wanted to be a diesel mechanic," she reveals with a laugh. "I had no intention, no ambition to be in the theater.

"I couldn't get funding to get into diesel mechanics school," she says. She went on to have an illustrious career as a truck driver, one of the first female tractor-trailer truckers on the Trans Alaska Pipeline.

Fate took a peculiar turn when the Bureau of Indian Affairs popped up with a strange offer, she says.

"They said they'd help me get more education – but in theater classes! I was a smarty-mouth and said OK. I'll do that. I began those classes, clueless – no idea what to do."

That was in 1980. Since that moment that she remembers as preposterous, Diane has proven herself over and over again, in a distinguished theater career.

Early in that career, she played ingénues – "innocent, sweet young things." She moved on to play a loud-mouthed southern belle ("I worked for weeks to master a thick southern accent"); a role in a French farce; a tottering drunk, and has been in many leading roles and one-woman-show performances, here and in foreign countries.

Currently, Diane is playing Linda, a grandmother in the Perseverance Theatre play, "They Don't Talk Back." It's been showing to lots of critical acclaim in Juneau through February and will open in Anchorage on March 2, continuing through March 12, in the Sydney Laurence Theatre at the Alaska Center for the Performing Arts.

"I love this role," Diane comments. "It's an all-Native cast, a world-premiere play with a fantastic script, written by Tlingit playwright Frank Henry Kaash Kataasse. There's both humor and sadness in it. It's been wonderful to be with this group of actors. All the men are so professional, polite and dedicated to doing a good job."

The play is a coming-of-age story about a 17-year-old grandson, Nick, who is sent by floatplane from the city of Juneau to live with his grandparents and cousin in a small, undisclosed Southeast Alaskan village.

There, three generations work to adapt to the changes his arrival has caused, while Nick learns about his family's history and who he is as a Tlingit.

"The grandparents work so hard to keep the family together," Linda says. "They have to deal with a lot of real life stuff. There are a lot of issues people are dealing with today – aspects of drug addiction, homeless veterans issues, grandparents raising grandchildren. I love the fact that, through it all, the grandma and grandpa are playful with each other, loving and strong."

Diane admits that when Perseverance Theatre approached her with this grandma role, she thought "no way."

"I felt I was way too busy. I told myself I'd be insane to even think about it. I have a full time job as a University of Alaska Fairbanks professor in Alaska Native Studies.

She flew to Juneau where there were only three weeks for the intensive rehearsals before the play opened.

"I realize now that I would have kicked myself if I'd turned down this role. But I'm starting to feel I'm getting a little old for five-hour rehearsals on top of my job. I just take it one day at a time, and when I play a character with aches and pains, I often don't have to act." She laughs. "The aches and pains can be real."

Diane is now a grandmother herself. Three-year-old Olivia lives in Colorado. "I love being a grandma!" Diane almost explodes in sharing this. "So I identify with grandma Linda in this role, the longing to make things good for a grandchild. I wish I could see Olivia more. But we Facetime. I get such a kick out of that."

She pauses before adding how much Olivia loves her daddy, Linda's son, Latseen.

"My son's name means 'strong', and he's proven that he deserves that name." An Iraq Army veteran, Latseen was wounded there in 2005. "He lost both his legs and wasn't expected to live," Diane comments. "It was a life-changing experience for both of us," she says.

Diane flew with her son from Germany to Walter Reed Hospital in Bethesda, Md. "I bonded with all the wounded soldiers on that flight. They extended so much love and support to my son, the most critically wounded."

Latseen spent 10 months in the hospital, but today he hand cycles, plays sled hockey, and is involved in adapted skiing.

"I'll never forget what he told me. 'Losing my legs was just a bump on the road of life. You have to really live while you are alive.'"

And so Diane continues to dive into life. "I encourage all seniors to do that, to get out and be involved. Do a play. Go to the senior center and share, sing. Old people need love, too – like the grandma and grandpa in the play, still flirtatious."

That advice triggered one more memory, one that has stayed with her since she was a teenager.

"I was 18 and volunteering in a Portland senior center. All of a sudden there was lots of giggling, a flurry of activity. 'What's going on?' I wondered. All the women were primping, all dressed up, spiffy in their wheelchairs. Ah ha! I found out a guy who had been a hot item there was coming back to visit. Such a buzz! 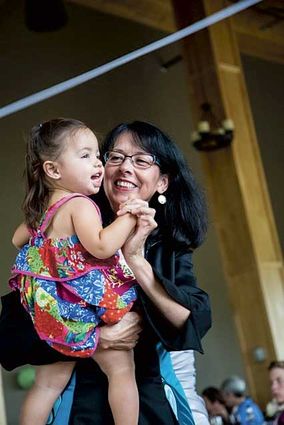 Diane Benson dances with her granddaughter, Olivia, at a nephew's wedding. "I love being a grandmother," she says.

"I have a goal to keep on having fun, being excited. I don't want to see myself, or other seniors, sitting in a chair, just looking out the window. That's not fun. Now, flirting with an old guy who might be sitting in the chair next to you, that could be fun."

Not just an actor, today Diane is a scriptwriter, professor, videographer, political activist, volunteer – and yes, a grandmother. She's still playing many roles in her life, just as varied as the roles of her long acting career.

Tickets for this new Perseverance Theatre play in Anchorage, "They Don't Talk Back," may be purchased on the CenterTix website, at ptalaska.org, or by calling 236-ARTS.

One reviewer wrote, "Benson is sweet, sunny and wonderful as Linda." I think we're all glad she didn't have the funds to go to diesel mechanics school. Let's hope that her wish for more theater roles for seniors, for grandmothers, comes true.