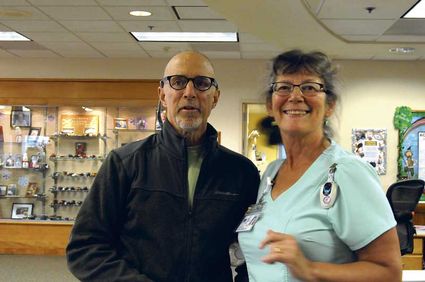 Former Anchorage Daily News photographer Jim Lavrakas stands with his wife, Ruth, who is a geriatric nurse at South Peninsula Hospital's Long Term Care Unit in Homer. Each year, Jim treats the unit's residents to a slideshow presentation about his many years covering the Iditarod.

"I covered the race nine times, four times from start to finish, all 1,049 miles from Anchorage to Nome," Lavrakas told his eager audience at last year's slideshow.

"At first, I flew in a plane from checkpoint to checkpoint, but then I realized I needed to get on a snowmachine and go down on the trail and see where the mushers were."

He starts the show with his favorite photo of a musher carrying his lightweight sled against a blazing sunset in Unalakleet, as he prepares to travel across the ice of Norton Sound.

Here in the unit Jim is known as "Ruth's husband," because his wife works there as a geriatric nurse, but once a year, he's a daring-do photojournalist again telling stories that any Alaskan, no matter their age, loves to hear.

At the ceremonial start on Anchorage's Fifth Avenue, close by Balto's statue, Lavrakas said mushers are at ease knowing there's no pressure.

"They meet the crowds of people, show off their sponsors, and know that the time they spend on Anchorage trails aren't counted, there's no pressure."

Lavrakas said it costs $60,000 a year to train a team, feed the team and get ready for the race.

"In Anchorage, they're celebrities," he says, as a slide of Jeff King goes up on the screen. "Jeff King won the race four times, and was sponsored by Cabela's, Costco and Royal Canin dog food - I think he possibly got free dog food for a year."

A photo of Rick Swenson pops up and Lavrakas said you could tell his sponsor by the logo displayed on his sled - Eukanuba dog food, and DeeDee Jonrowe has been supported by Eddie Bauer for years.

"Jim Lanier is the oldest musher at 75, he's a tough old guy, but Joe Redington was in his 80s," Lavrakas says to audience exclamations "Wow" and "Great."

"Jeff King does the science of it and Martin Buser always wears a red plaid cap," he says. "Everybody wants to slap (the mushers') hands as they go by."

He talked about the twist and turns of the trail, and how as it leaves Skwentna, civilization ends and wilderness begins.

"Sometimes you have a moose on the trail and at the lodge at Rainey Pass, there were horses that ran free, and the dogs don't know what they're dealing with," he says.

Over the top of Rainey Pass, down dangerously steep and twisty Dalzell Gorge, to Nikolai, McGrath, and once you get out of the Beaver Mountains, there's the ghost town of Iditarod.

A photo of Doug Swingley is next, showing him looking as if he's crouched on the sled running the dogs down a trail that can hardly be seen.

"Doug Swingley has a little fold-down seat he can sit and take a rest on," Lavrakas says. "He was the first musher outside of Alaska to win."

One time he was in Unalakleet as the 45 mph winds blew snow, but John Baker's team was used to that.

"John Baker's dogs had no problem because they trained n Kotzebue," Lavrakas says.

He remembers the old-timers who passed away - Herbie Nayokpuk, The Shishmaref Cannonball, who was respected by all, and the great George Attla.

Lavrakas even had thoughts of entering the Iditarod, never did, but had the pleasure of driving a team several times.

"Riding in a dog team is one of the funnest things I have ever done," he says.

Growing up with a sled dog racing mom 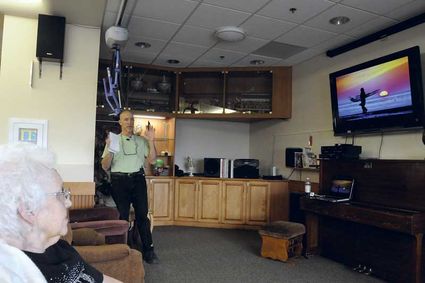 Susan Hubbard, the activity director at the unit, loves to hear Lavrakas' stories because she has a whopper of her own. Her mother, Kay Briggs, was one of the few women in competitive sled dog races in the 1960s.

Moving from New York in the 1960s and living in an A-frame cabin in Palmer, her mom and her dad, Dale, paired up so Kay could race.

"Dad was her dog handler, she made all her own harnesses," Hubbard says. "We spent lots of weekends at Tudor Track in Anchorage."

But Joe Redington Sr. also helped her out. "Somehow they met and kind of got together," she says.

For the Fur Rondy race, the men's race was downtown and women's at Tudor Track. She was sponsored by a radio station.

"She told us that when a dog is racing with its tail down it's pulling its weight, but if its tail is up, it's lollygagging," Hubbard says to laughs.

Kay gave up the dogs in order to raise her children.

"She was the Susan Butcher of her day," Hubbard says, with some pride in her voice.