This island is a favorite winter destination for Alaskans 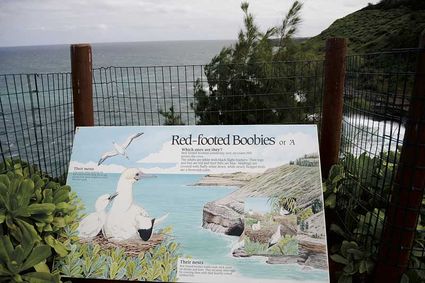 Kauai is a must for avid birders. From this vantage point in the Kilauea Lighthouse, keep a sharp eye for red-footed boobies, Laysan albatross and the great frigate bird with its 8-foot wingspan.

Just a week in the sun makes Jack much easier to live with.

Truly, the lack of sun in wintertime does tax one's sanity in Alaska. I was of the mind that I was a true Alaskan and didn't need any stinking winter vacation - until I took a week in Kauai.

Before I went, someone said to me in Utqiagvik, "warm sand between your toes." The image almost made me break down as I looked around at the minus-degree scenery and blowing snow while I waited for a bus.

Heeding the call, winter slipped by easily after a mere seven days away and I came back refreshed, tanned and full of tropical fruit and drink.

Visitors have lots to do

Kauai is a favorite for those from Utqiagvik, possibly because of the influence of some Native Hawaiians who live there and for whom Kauai is where they grew up.

Unlike Moloka'i, this island has all the bells and whistles that tourists look for – shopping malls, lots of tours and of course, Hilo Hattie's.

One of the eight Hawaiian Islands, Kaua'i lies to the west of O'ahu and east of Ni'ihau, which has even fewer tourist amenities than Moloka'i.

Kauai's beaches are more accessible and less turbulent than other islands I have visited, with long stretches of white sand. As the oldest island in the chain, Kaua'i boasts more beaches because of that erosion. Nicknamed "The Garden Island," Kauai is watered by lots of rain, creating dense foliage through which you will travel for access to some beaches.

We spent a lot of time on Nukoli'i Beach and were visited by a deer. However, while this beach is quiet it's not very swimmable. The best for swimming as well as snorkeling are Poipu, Hanalei Bay and Anni Beach. You can also just drive around the island and jump in and out of the sea until you find your favorite. Be warned though, some waters can be turbulent and dangerous. And please don't run and dive into the waves unless you know what's under them. I know two people who barely avoided paralysis doing this.

Lumahai Beach, accessible by a short hike through a tropical path, is between Hanalei and Haena beaches. Secluded and known for its lava caves and formations, the undertow is sometimes dangerous, so be aware.

Hanalei, made famous by the song "Puff the Magic Dragon," by Peter, Paul and Mary, holds the Hanalei National Wildlife Refuge, home to many varieties of endangered Hawaiian waterbirds. There is world-class surfing here and a quaint town to visit.

Go to Hanalei Valley lookout to view the fields of taro (or "kalo" in Hawaiian), that is made into poi, a traditional starch. The patchwork of intense green plants form an earthly quilt that will stay in your thoughts as a tranquil image. When the dentist says, "Go to your quiet place," go here.

The Kilauea Light and Wildlife Refuge has a $5 entrance fee for those 16 and older. There's handicap parking, the trail is cement and wheelchair friendly, and a golf cart is also available upon request at the entrance booth.

From the vantage point of the Kilauea Lighthouse look out for red-footed boobies, Laysan albatross and the great frigate bird with its 8-foot wingspan.

Hawaii is a must for avid birders.

In the winter months, green-sea turtles, monk seals, humpback whales, and dolphins can be seen frolicking in the waters. Remember, the humpies are our whales on maternity leave - do not let the Hawaiians convince you otherwise.

On the way to the light, watch for Nenes along the path - one almost seemed to pose for me and was not shy at all. I enjoyed this park so much and was just fascinated by the churning of the waves in the cove and the birds that defied it all to dive for food.

Perhaps you have gone to an Eagle's luau at your local aerie. The ones here are much better and there's lots more food.

Nighttime luaus are spectacular events with drumming and dancing and lots of tiki torches.

It's one reason why I try and coordinate my trip with the full moon-nothing beats a full moon over the shores of Kuaui. 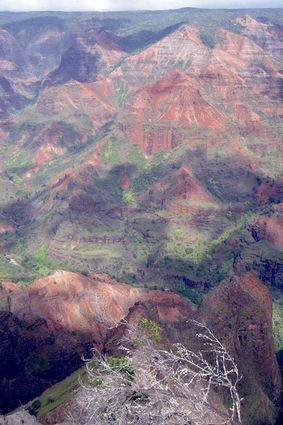 Located on the western side of Kauai, Waimea Canyon, also known as the Grand Canyon of the Pacific, runs 10 miles long and up to 3,000 feet deep.

Traditional music and dances salute the peoples who influenced Hawaiian culture like like the hula, Tahitian drum dances and the Samoan fire knife, with dancers in the requisite coconut shell bras and loincloths.

The poi was colored purple, I think to make it seem more palatable than it's natural white color that could pass for muktuk.

There's lots to do on this island. I do believe that Hawaii in the winter is best for Alaskans - not too hot and not too cold. And it's just a straight shot, so on an Alaska Airlines flight, you're there in 10 hours with just one stop in Seattle for around $800.