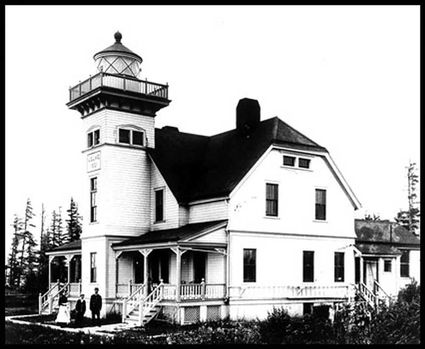 Sentinel Island lighthouse, seen here in 1902, was one of two light stations built in Southeast Alaska following a large influx of steamers bringing men and freight north during the rush for gold to the Klondike.

The discovery of rich gold deposits in the upper Yukon River in the late 1890s brought a massive rise in the number of ships plying Alaska waters. Especially in Lynn Canal, a part of the Inside Passage. It was a safer route for ships to travel than the open ocean route to the west through the eastern Gulf of Alaska. But once the ships passed British Columbia, they had few guides through the Inside Passage.

Weather and terrain in Southeast Alaska made traveling perilous – fog, rain, strong tides and rocky shorelines were the order of the day. More than 300 accidents were reported in Inside Passage waters in 1898. And even though Alaska's dignitaries had been pleading for a decade to have navigational aids placed along the vast coastline, only a few markers and buoys had been installed on any of Alaska's 20,000 miles of coastline (more than the Atlantic, Pacific and Gulf coasts of the United States combined).

But the volume and value of traffic that followed the discovery of gold in the Klondike tipped the scales in favor of safety for ships sailing to Southeast Alaska. Congress finally appropriated funds for two lighthouses in 1900, one at Five Finger Islands and one at Sentinel Island. The inspector and engineer for the Thirteenth Lighthouse District gave top priority for the light at Sentinel Island at the entrance to Lynn Canal.

Juneau resident George James received the contract and built the Sentinel Island station in 1901. This wooden lighthouse, which included keeper quarters, began operating on March 1, 1902, and cost $21,267 to construct – more than half a million in today's dollars. The Five Finger lighthouse, below Admiralty Island, cost about the same amount and went into operation in March 1902, as well.

Additional lights soon followed at Mary Island in Revillagigedo Channel below Ketchikan, Lincoln rock in Clarence Strait and Scotch Cap on Unimak Island. Scotch Cap was the only light outside Southeast Alaska and marked the most heavily trafficked passage between the Pacific Ocean and the Bering Sea at the west end of the Alaska Peninsula.

The Scotch Cap lighthouse, built in 1903, was so remote that the keeper was allowed one year of vacation after serving four years at the station. It stood 45 feet tall, and according to the Coast Guard Historian's Office, witnessed several shipwrecks. Lights later were added at 10 more locations, all major stations with permanent lights and housing for the light keepers and their families. Working these lighthouses was tedious, isolated and sometimes dangerous work. In one instance, it proved tragic.

In 1945, Anthony L. Petit was assigned to Scotch Cap as the head of a five-man crew. They tended the light, which was 55 feet above the water on a low bluff overlooking the sea. The site also had a radio facility higher up the bluff.

On April 1, 1946, radio station personnel watched in horror as a giant tsunami from the southwest struck the bluff around 2 a.m. The lighthouse was smashed instantly, along with all its outbuildings, and the U.S. Coast Guard's five-man crew was swept out to sea. The bodies of Petit, Jack Colvin, Dewey Dykstra, Leonard Pickering and Paul J. Ness were found on the rocky shore the next day.

Alaska no longer has any manned lighthouses. By 1984, all light stations had been automated.