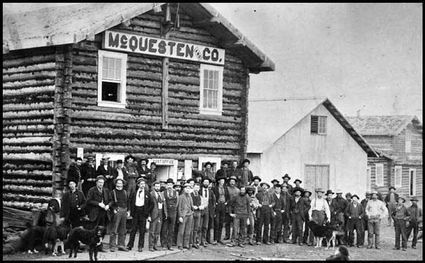 The first U.S. Post Office in Alaska's Interior was housed in this building, McQuesten and Company, in Circle City after Jack McQuesten was appointed postmaster.

While the Southeast town of Sitka claims the first U.S. Post Office established in America's new possession of Alaska in 1867, Circle City – located on the banks of the Yukon River – holds the honor for the first post office in Alaska's Interior, according to "Directory of Alaska Post Offices and Postmasters."

Circle City's first postmaster, famous outfitter Jack McQuesten, was appointed on March 19, 1896. Mail had been carried by private mail runners that traveled along a route from the new mining district of Juneau, over the mountain passes and into the then-booming Circle district before that date.

The town, established in 1893 as a supply point for goods shipped up the Yukon and overland to gold mining camps, was named Circle City in the late 1890s because miners thought it was on the Arctic Circle. It is not. The Arctic Circle is about 50 miles farther north.

Also called Circle, the town is located 160 miles northeast of Fairbanks and was the largest mining town on the Yukon by 1896. With a population of 700, it boasted an Alaska Commercial Company store, about 10 dance halls and an opera house, library, school, hospital and Episcopal Church.

A March 1898 issue of the Yukon Press reported the community had added four general stores, two jewelers, two physicians and two dentists following the discovery of gold in the Klondike. Gold dust became the currency of the time, although some "bingles" and tokens also were in use.

Most of the gold in the area, with a few exceptions, was flaky "oatmeal" consistency. Although some coarse nuggets that weighed around 3 and 4 ounces also were reported, according to an article in the Fairbanks Daily News-Miner. Experts estimated the average value of gold in the region was $17.73 an ounce ($425 today). Some areas were valued at 25 cents a square foot ($6).

The Circle City newspaper also featured mining news about strikes on creeks in the vicinity, including Deadwood, Mammoth, Mastodon, Independence, Miller and Crooked. The paper summarized highlights of miners' meetings and social events, too, and reported the fact that the town's "standard time" would be based on celestial observations of one Lieutenant Bemis.

Along with legal notices and other orders of business, the Yukon Press also kept the community up to date on criminal activities, arrests and who had been jailed. The newspaper never had an opportunity to report on a jailbreak, however, as no one ever escaped from that jail.

Circle City's jailhouse was, perhaps, the most unique jail in the entire country. A sign, posted prominently on the front door, read:

"Notice: All prisoners must report by 9 o'clock p.m. or they will be locked out for the night. By order of the U.S. Marshal."

As it turns out, prisoners willingly reported back to the city jail by 9 p.m., as Circle City was 200 miles away from any route of escape. And since winter temperatures ranged from 20 to 50 below zero, the jail offered prisoners a warm place to spend the night with plenty of food to eat.

Following the 1898 Klondike stampede and the rush to Nome's beaches in 1899, Circle City declined in population. But the post office still remains and serves the remaining residents, which are mostly Athabascan now.