The 4th is still with us 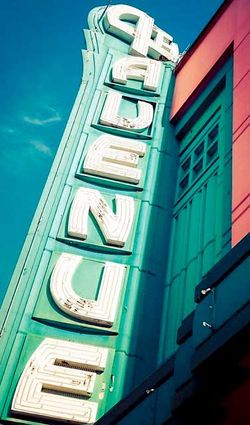 The 4th Avenue Theatre marquee, in its Art Deco style, is one of downtown Anchorage's best-known fixtures.

There's a magnet for memories in Anchorage. Ask people about the 4th Avenue Theatre and memories come flooding back.

They seem to come in two waves. Seniors remember the early movies shown there, some even recalling opening night, May 31, 1947, when excitement ran high for joining the crowd at the theatre's first movie, Columbia's hit, "The Jolson Story." Younger generations, the millennials, have fond memories of high school proms, school fundraising events and weddings held there.

I sat with Ira Perman recently over coffee, sharing our own 4th Avenue Theatre memories. Ira is co-chair, along with Sandy Harper, of a committee planning a three-day celebration of the theatre for this Memorial Day Weekend - Saturday, Sunday and Monday, May 27, 28 and 29. They are part of a group called "The Friends of the Fourth Avenue Theatre" and the weekend will mark the 70th anniversary of the theatre's opening.

The anniversary committee has adopted the slogan, "May the 4th Be with Us!", reflecting a driving desire to see the theatre remain an Anchorage landmark. That committee has grown by leaps and bounds.

"We started with maybe a dozen people agreeing to be a part of the anniversary group," Ira tells me. "The group has more than doubled since we began meeting several weeks ago, almost spontaneously. The theatre and a desire to keep it generate their own energy."

Ira wanted to dispel two myths about the theatre and what people think about it today. The first myth, already mentioned, is that only seniors care about preserving the theatre.

"In working on this anniversary celebration, I find even more interest among younger groups of people," he tells me. "They seem to realize, sharply, how very unique this building is in our community, one of a kind when it was built, but even more unique and important in today's Anchorage landscape. There's nothing else like it.

"And here's the second myth," he says, pushing a photo across the table toward me. It is a color photo of the theatre's interior, gleaming gold and mahogany wood accents surrounding the screen area, the two tall, vertical murals on each side depicting Alaska scenes and history, and the Big Dipper in twinkling lights on the dark blue ceiling.

Talk about memories flooding back. How often I sat there with our young family soon after we moved to Anchorage in the 1970s, looking up and stargazing at the ceiling, and full of wonder at the elegance of the murals in shining gold and silver tones to the sides.

I'm startled since I'd heard that the theatre had been in disrepair for many years, since it had been closed to any events for years. I'd pictured it dusty and maybe in shambles, the second myth Ira wants to dispel. And I'd heard that no one had been in there for a long time.

"I got in there on Assembly business," Ira explains, "and I grabbed my iPhone to get these pictures. That day was a catalyst for me to focus on seeing that the theatre remains a treasure in this town, that it not be torn down. There have been waves of interest in preservation over the years. This visit reinvigorated me. The theatre is still elegant, beautiful inside. One very good thing is that the owners had fairly recently made repairs to the roof."

I sit there with my coffee, so impressed by the photo.

We stopped to laugh at a shared memory. One of the movies we'd both seen there in the early '80s was "Tootsie" with Dustin Huffman. "And then there was 'Ghost Busters'," I tell Ira. "My husband and I saw that there with our kids when they were pretty little."

I spot a friend sitting a few tables away from us in the coffee shop. He comes over to see what we are staring at. "Oh, the 4th Avenue Theatre," he comments without prompting. "I remember going to many wonderful events there."

This is becoming a phenomenon as I visit with people for this story. Two days before this coffee shop visit with Ira, I'd been at a midtown cafe, visiting with two friends who had been usherettes when the theatre first opened. Betty Berry was an usher on that opening night back in 1947, and Carol Anne Dodd began ushering around 1951. Betty actually met her husband while ushering there; they celebrated their 50th wedding anniversary in the theatre in 2000.

We've got newspaper clippings spread across our table, one even a double-page spread announcement in the Anchorage News, May 31, 1947, full of congratulatory posts on opening day. And we have the souvenir program from opening night, its cover all in gold, featuring one of the murals on the front.

Our waitress spots it. "What's that," she asks, and then answers her own question. "Oh, I know. That was in the 4th Avenue Theatre. I used to love to go there for events and just look around – so beautiful in there."

Just for fun, and sensing how much the theatre meant for so many, prompting fond and good memories, I put up a Facebook post, hoping others would share.

Memories came flooding in: "I remember the love seats, two seats side-by-side with no arm dividers between them." "I remember sitting with teenage dates in the balcony. I loved sitting up there." "I remember going to Repertory Theatre plays there." "I got together with a group of friends who had never seen 'Gone with the Wind' when it played there on the big screen about 1980." "I remember standing in a huge line in the '50s to see 'Alice in Wonderland'. Scared the hell out of me when she went down the rabbit hole." "We had a few wonderful Passover Seders there." "I remember going there as a girl and thinking it was so grand and 'big city'."

Along with these memories came an often-asked question. What is the state of the theatre today? Will it be torn down? Can it be preserved?

A permit has been granted to Peach Investments, who owns the 4th Avenue Theatre, to bring down the building. Ira states that the issuing of that demolition permit in October of 2015 was an impetus to rally. According to the Friends of 4th Avenue Theatre, the building is on the U.S. national register of historic places and on the State of Alaska's Landmark Register, but neither of these designations can protect the theatre from demolition.

A meeting with the Alaska Historical Commission was to be held on April 24 (before the publication of this issue of Senior Voice). People were being encouraged to come to the meeting and testify to the commission about the importance of preserving the building, urging that it be placed under the Alaska Historic Preservation Act. It is considered to be one of the finest examples anywhere of the Art Deco movement.

"May the 4th Still Be with Us!" proclaimed the posters and press releases, encouraging testimony. "You can make a difference in preserving Alaska's treasured landmark!"

So the push is on by the 4th Avenue Theatre 70th Anniversary Celebration Committee to highlight all the theatre means to the community and to the state, to make real this appreciation. "Stay in town for the Memorial Weekend," Sandy Harper encourages. "You won't want to miss this huge three-day celebration."

Sandy states, "There will be a spectacular street fair on Saturday on Fourth Avenue in front of the theatre, organized by Darl Schaaff and Art Services North. There will be bands, two stages set up for actor performances, dancing in the street – come jitterbug. There will be food vendors. Anchorage Downtown Partnership is organizing the food trucks and a beer tent."

Three movies will be shown at the Performing Arts Center during the three days – "The Jolson Story" that was showing on opening night in 1947, "The Sword in the Stone" that was playing in the theatre when the 1964 earthquake happened, and Cap Lathrop's movie, "The Cheechakos". (Captain Austin E. Lathrop – Cap Lathrop – built the theatre, beginning with excavation for the building in 1941. The war would interrupt actual construction.)

On Saturday, there will be an antique cars display.

A panel discussion by the Alaska Design Forum is scheduled for Monday at the Anchorage Museum at Rasmuson Center. According to Ira, they will be discussing competing visions for the future use of the theatre.

"There will also be storytelling," Ira says. "We want people to come and tell their 4th Avenue Theatre stories. There are so many out there." Anyone interested in being a part of the storytelling may contact Ira at 907-764-6040 Ira.l.perman@gmail.com.

In his dedication statement for the souvenir program, dated May 31, 1947, Captain Al Lathrop wrote, "This theater was built especially for Alaskans . . . it is the culmination of a sincere wish to bring the people of Anchorage, and visitors from all parts of Alaska, a theater unexcelled on the American continent.

"Regardless of effort and cost, we have tried to make this theater a place of comfort and beauty . . . a place where you will enjoy fine motion pictures, presented with the latest in sound and projection equipment.

"We have deeply appreciated the patience you have shown during the war years when we were forced to stop construction. We hope you will feel repaid by the Fourth Avenue Theater, as we proudly present it to you. It is for you, your family and friends." 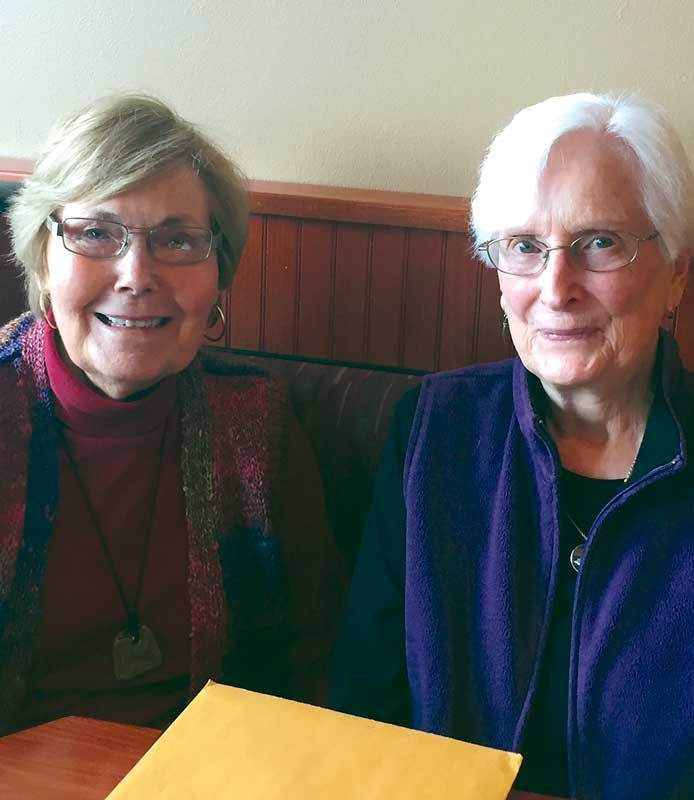 Carol Anne Dodd, on the left, and Betty Berry, usherettes when the 4th Avenue Theatre opened, look over clippings and photos recently as the 70th anniversary of the theatre opening approaches.

Supposedly, Cap Lathrop always insisted on the British spelling, "theatre," and this has become the accepted spelling for the building. But, as you see, the dedication used the spelling "theater."

One more historical note. On June 2, 1947, Robert Atwood, publisher of the Anchorage Daily Times, wrote the following in an editorial.

"The Fourth Avenue Theater, which was formally opened over the Memorial Day weekend, is one of the grandest additions to life in the vicinity of Anchorage.

"The building and appointments are superb. It will always be a pleasure to have this palace for relaxation and entertainment."

This could be our community's "wish upon a star" – that the 4th Avenue Theatre's Big Dipper stars will continue to shine overhead in a building that has meant so much to so many over the past 70 years.