From sapling to the state's tallest flagpole 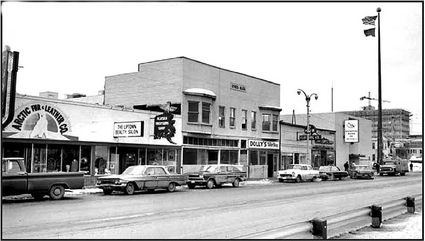 The tallest flagpole in Alaska, seen here in front of Anchorage City Hall in 1965, started out as a small spruce tree on Prince of Wales Island in Southeast. It grew up to fly the nation's newest flag in the newest state's largest city in 1959.

A small spruce that peered skyward in a dense forest on Prince of Wales Island in the mid-1700s found its way to Anchorage when Alaska became America's 49th state. This Southeast Alaska sapling held no importance when Secretary of State William Seward finalized the purchase of Alaska from the Russians on March 30, 1867. And most Americans at the time thought Alaska unimportant, as well, and referred to it as "Seward's Ice Box."

Newspaper accounts of how this tree became a giant flagpole in Anchorage vary. An article in the Anchorage Daily News on Sept. 10, 1959, reported that a man from Ketchikan claimed the huge pole, which measured 140 feet long, was selected because people in Ketchikan didn't think the folks in Anchorage would know what to do with it.

Another article appeared years later that again speculated the pole was sent to Anchorage in jest. "The Pole That A Gag Built," published in the Anchorage Daily Times in November 1970, said the Ketchikan Pulp Co. and Ketchikan Chamber of Commerce sent the giant spruce to Anchorage as a joke. The pole, 36 inches in diameter at its base and about 12 inches at its top, was selected because the "friendly Southeastern pranksters" thought it might cause a problem for the enthusiastic statehood supporters in Anchorage.

But George H. Byer, who had been chairman of the Anchorage Parks and Recreation Commission at the time of the flagpole donation and later became mayor, wrote to the newspaper to set the record straight. The "gag" actually originated in Anchorage, he said in his letter dated Dec. 4, 1970, for one All-American City to another to do a real patriotic deed. He said it would be great to have the tallest flagpole in the largest state in the biggest city to fly the newest 49th state flag.

It took 20 loggers to fall, trim, cut and bark the tree. They then had to bulldoze the log 40 miles to the loading wharf and then barge it 1,000 miles through the Gulf of Alaska and its treacherous storm-infested seas to the Port of Anchorage.

Once the giant log reached Anchorage, it was stored at the Delaney Park Strip until the city workers could dig a 15-foot hole in which to place the pole on the City Hall lawn. Then Anchorageites attended a colorful ceremony on the city hall lawn to dedicate the flagpole on Labor Day, Sept. 8.

Within a year of the dedication ceremony, construction began on a crown to top the tallest natural flagpole in the new state – a stainless steel globe with continents made of copper and the equator from brass was built by sheet metal workers. A crane hoisted the globe to the top of the pole on May 18, 1961.

Workers trimmed the deteriorating historic pole to 90 feet in 1987 and moved it from city hall to the Delaney Park Strip to become the Veterans Memorial flagpole. Then it came down for good in 1999 when a 110-foot replacement pole was erected to "continue the tradition established in 1959 of displaying the flags of this great nation and the state in grandest honor."

A huge windstorm toppled that pole in September 2012, splitting the beautiful globe like a melon. And that's when a battered Maxwell House coffee canister tumbled out. When pried open, its contents included a yellowed copy of the Anchorage Daily News from May 6, 1961, with headlines about Alan Shepard, the first American astronaut in space, a 1960 penny and a Union 76 gas card.