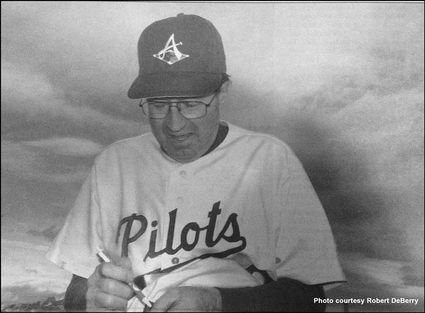 Baseball has long been a staple of summers in Alaska. And when Anchorage baseball fans wanted a semi-pro team in 1969, they knew they could count on George "Lefty" Van Brunt to coach the boys of summer from the first base side of the plate. Lefty's career with the Anchorage Glacier Pilots began that year when the Anchorage Community got serious about baseball because the adult league's all-star team could never beat the Fairbanks team.

"The Gold Panners used to come down and kick our butts," Lefty recalled in an interview with Laurel Bill in 2004. "We could usually take the first game, but not the rest."

That summer spawned one of the best college summer baseball programs in the country, and Van Brunt was a bedrock of that success.

"He makes sure everything runs smooth," said Kris Didion, one-time manager of the team. "The guys love him."

Still sporting a full head of dark hair at 72, the soft-spoken southpaw loved baseball and enjoyed coaching new hopefuls. It brought him in contact with some of the best in the game. Around 150 Pilots made it to the majors during Lefty's tenure with the boys in blue.

There was Chris Chambliss, an All-Star player and Gold-Glove winner who propelled the New York Yankees to the World Series with a bottom-of-the-ninth home run against the Kansas City Royals in 1976.

Then there was Randy Jones, a Pilot in 1971, who went on to become the Cy Young Award winner for the San Diego Padres in 1975.

And Van Brunt said he would never forget Randall "Randy" Johnson, who pitched the Arizona Diamondbacks to a World Series title in 2001 and pitched a perfect game in 2004. He chuckled when he remembered Johnson, a budding pitcher for the Pilots in 1984.

"He led the league in walks," Van Brunt said. "He threw wild pitches because he wouldn't bend that 6-foot, 10-inch frame."

Once, when Van Brunt was catching for Johnson, the then 19-year-old ribbed a bullet of a pitch across home plate.

"I didn't expect it because he never listened to me before," Left said. "Hit me in my foot with a fast ball. Big toe to be exact. I hobbled around for a week."

The loveable coach got his nickname while growing up in California.

"I was the only left-handed kid in my neighborhood in San Francisco," he said.

Back then, teachers forced left-handers to use their right hands.

"They used to break you with a ruler in those days," he said. "I eat and write with my right hand."

But they couldn't break his left-handed pitch. In 1949, he signed with the New York Giants' organization at the age of 16 to play for the Class C Diamonds as a pitcher/outfielder in Pittsburg, California.

"All their lefties went down," he said. "So they needed me."

Manager Vince DiMaggio, one of the lesser known of the famous DiMaggio brothers, didn't have much faith in the 5-foot, 11-inch, 150-pound teen.

"He said, 'I don't know what they see in you,'" Van Brunt recalled.

He proved his worth with two quick victories. But shortly afterward, the Korean War put an end to Van Brunt's promising career. Shipped to Alaska in 1951, he decided to make Anchorage his home when he was discharged four years later.

During the 1960s, Van Brunt became a one-man baseball machine. He was player/manager for the Anchorage Merchants, president of the Adult League, and manager of the American Legion Camp. He also got the Pilots off the ground.

"I'm just another fan," he said with a grin. "I just sit on the other side of the fence."

For the last few years of his life, Lefty still could be counted on to help out in the bullpen and toss Tootsie Rolls to fans in the stands.

The Pilots created the Lefty Van Brunt Pitching Award in 2008, a tribute to Lefty and all the pitchers who benefited from his concern for improving their skills. It has been given annually since then to outstanding pitchers during the summer season.

Lefty died on May 24, 2011. But those who were lucky enough to know him believe he's probably teaching folks to pitch at a ball field in the Great Beyond and tossing those familiar Tootsie Rolls to fans in the clouds.