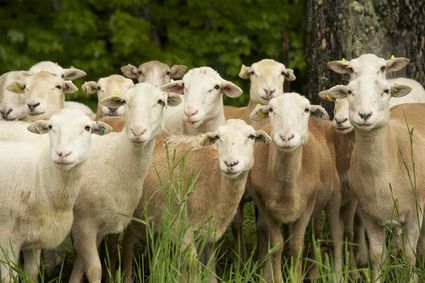 A flock of very nervous sheep wait to be called onto the field for the sheep dog trials.

Alaska craftspeople who work in gems and silver rush every year in late January to the Tucson Gem Show where 250 dealers hawk the supplies that keep local artisans afloat and viable for the tourism trade. It's a huge affair. Not so the small, regional wool and sheep shows where sheep farmers and yarn makers bring out their best to show and sell.

The Massachusetts Sheep and Woolcraft Fair in Cummington, Massachusetts, a mere blip on your GPS, is held Memorial Day weekend and is a real look into the people who raise, shear and spin wool into a rainbow of yarn.

Like Jenny Smith from Acker's Acres, who traveled from New Gloucester, Maine, to sit and spin at her Kromski spinning wheel, combining Angora rabbit and Merino wool into a rainbow of yarn.

"They've been making these spinning wheels for over 500 years," she says, as she handily works the fluff into strands.

Sheep, among the first animals to be domesticated, were brought into the human fold through the wild mouflon of Mesopotamia between 11,000 and 9,000 BC. Wool and sheep fairs celebrate this ancient relationship between the animal and mankind.

It's true, little has changed in this world of sheep husbandry over the many centuries, except perhaps for the number of distinct breeds worldwide, estimated at 1,000.

From the Judas sheep with four horns, which I have to say always creeps me out and to me is nightmarish, to the sweet-faced Teeswater with its curlicue forelock and almost dreadlock-like wool that cascades off its body, the fair is a delight in diversity.

The sheep pens give the opportunity to get a close look at the sheep, pet them and run your hands through their oil-rich wool. If they let you - sheep are pretty jumpy. I had a hard time taking a photo that wasn't a blur because I didn't want to use flash.

The sheep dog trials are quite fascinating with the predominant sheep dog breed being the Border Collie - fast and nimble. The object is to herd two to four sheep around the course and then into a pen. What makes each trial unique is the method the dogs use - full rush or slow creep.

Off to the side, the pen of sheep that are next huddle with eyes wide and nostrils flared knowing (maybe I'm reading too much into it) that they're next.

All of this makes for a display of talent and drama better than most TV series.

I neither weave nor spin, I don't even knit, but I do admire the work offered at this fair and the craftsmanship that went into it.

Six vendor stalls, covered but open to the air, display yarns from the fluffy to the lanolin-rich yarn that goes into an Aran Isle fisherman's sweater with its individual patterns that once helped to identify the bodies of those lost to the sea, and perhaps still does, will widen your world of what yarn can be. It's a distinctly different experience from a yarn store - think smells and the sound of the constant "M-a-a-a" emitted from close to 100 sheep. This is not a fair of carousels and rollercoasters, it's more peaceful and less frenetic. 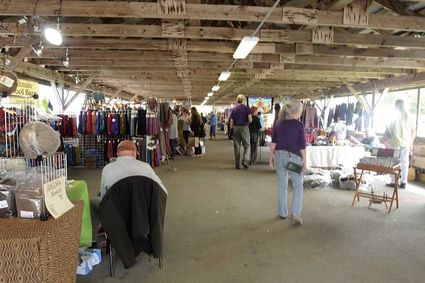 Open-air booths at the Massachusetts Sheep and Woolcraft Fair in Cummington, Mass., hold vendors offering yarn, wool to spin and hand-knitted items as well as local jams and maple syrup.

Airy scarves, stylish sweaters and colorful, cozy sweaters for the little ones hang on display, along with honey and jams, and of course, ever-present in New England - maple syrup. All spring from cottage industries and are worth every penny.

Small, local fairs are a way to support artisans' lives that in turn enriches a community and takes you out of your everyday element.

Sure there's the requisite fried dough, present in every culture, and cotton candy, but the real draw is the unique lifestyle of the people and the animals they raise.

There are such wool fairs all over the country. For a listing of national and international festivals, go to http://fiberevents.com. Please note that the Alaska Fiber Festival seems to be moribund on this site. However, the Anchorage Weavers and Spinners Group has a regular Lace Group, Stuckagain Knitters Group and Knitters' Night Out, so check them out at http://www.anchorageweavespin.org.