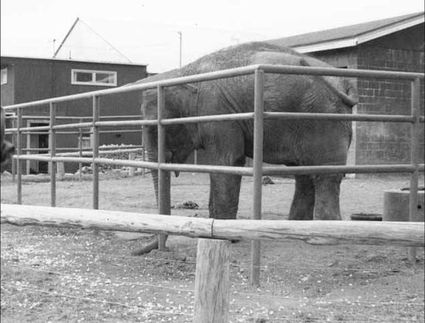 Annabelle the elephant, seen here in 1974, was one of the first animals featured in the Alaska Zoo in Anchorage.

A pachyderm named Annabelle, who became prolific with a paintbrush and easel, is responsible for the creation of the Alaska Zoo in Anchorage.

It all started when Jack Snyder saw a tongue-in-cheek come-on for a Chiffon toilet paper contest for grocers in 1966. The Crown Zellerbach company ad announced: "$3,000 or a baby elephant" to the winner.

The Anchorage grocer won the contest. Snyder then startled the tissue paper executives when he said, "I'll take the elephant."

One can just imaging the comments bandied about the boardroom after Snyder let his choice be known. Perhaps the executives said something like, "That's right, some crazy Alaskan chose a baby elephant over $3,000 in prize money!"

Those company officials searched until they found an 18-month-old Asian elephant that had worked for a circus. Her name was Annabelle.

Toilet paper reps hustled Annabelle into an airplane and sent her north on July 6, 1966. She stood just 3-1/2 feet tall when she stepped off the plane in Anchorage.

Annabelle, born in India in 1964, was the first pachyderm in Alaska since the ice age. She spent her summer on tour flying around Alaska spreading good will. Alaskans loved her.

Snyder then had to find a suitable winter shelter for his prize. He made arrangements to temporarily house Annabelle with Sammye Seawell, owner of the Diamond H Horse Ranch on O'Malley Road. Her Hillside ranch had the only heated stalls in town.

Annabelle had a hearty appetite, and after three months, Seawell asked Snyder about his plans for Annabelle.

"If you want Annabelle, you can have her," Snyder told her. The little elephant became part of Seawell's family.

Annabelle soon became quite popular with Anchorage residents, which sparked an idea that would secure Annabelle's future. Seawell persuaded Anchorage residents to form a nonprofit corporation to build a place "where the public could visit animals and learn about them."

Anchorage children had asked the city council to think about a zoo back in 1963, when two children – who said they represented 214 other children – presented a proposal to the city.

"We could sell popcorn or hold a carnival to raise money to buy a bison," they said in their petition. "It would be better to have one animal than none at all."

The council set up an advisory board to consider the matter, according to an article in the Anchorage Daily Times, but it wasn't until Seawell incorporated her company into the Alaska Children's Zoo on March 28, 1968, that it became a reality. Located on land adjacent to Seawell's ranch, it opened the following year with Annabelle and other donated animals – many of which were orphaned and/or injured.

The 30-acre park's name changed to Alaska Zoo in June 1980 and served as a star attraction to draw thousands of visitors to see various Alaska animals, including grizzly bears, moose and wolverines. A female African elephant named Maggie joined Annabelle as a companion in 1983.

Something magical happened at America's farthest-north zoo when trainers put a paintbrush into Annabelle's trunk in 1991. She started splattering brush strokes across canvas and created paintings in front of cheering visitors. She entertained generations of Alaskans with her artistic skill. Many people bought her abstract art.

People questioned whether the elephant really could paint and how she could hold a brush. An elephant's trunk has an estimated 40-50,000 muscles, at least 63 times more than an entire human body. The trunk is sensitive and flexible. Its tip also has a prehensile extension called a finger. That helps the animal perform delicate tasks and pick up small objects.

Elephant trainer David Hall and Annabelle developed her unique technique over time. Hall would load a brush with acrylic paint and hand it to the 8,000-pound artist. She learned to grab the brush with the end of her trunk and make vertical strokes on paper.

In a few years, people were buying her artwork.

"Annabelle makes her own living – and a living for others," Hall said in an interview for The Seattle Times in 1996. He believed she was a 4-ton bundle of talent.

Annabelle died on Dec. 15, 1997, at the age of 33, following complications from a foot infection. A tombstone embedded with her photograph marks the corner of the zoo where she is buried.