By Linda Cooper
For Senior Voice 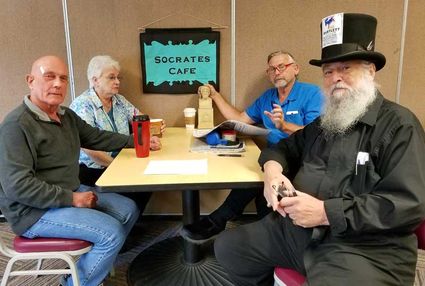 It's 10 a.m. on Friday at the Anchorage Senior Activity Center and time for Socrates Cafe, a weekly discussion group assembled to do some serious thinking and have fun doing it.

This week 10 people have gathered for a philosophical discussion designed to get their creative juices flowing and to tackle some age-old questions.

Participants follow the Socratic method for discussions. The Socratic method is a form of cooperative dialogue between individuals. It's based on asking and answering questions to stimulate critical thinking and to draw out ideas. It is also a stimulating way to structure a discussion and an enjoyable way to spend a Friday morning.

The topic this morning, chosen by a vote of those assembled, is: "Does ideology create tunnel vision?" Jack, the author of the topic, opens the discussion with a thought: "An ideology means a set of ideas or beliefs," he says, "and the question proposes that once we adopt a certain ideology we often then forget to hear other sides of the issue. We just see things our own way."

"Can you give us an example?" Mary asks. (Under session rules she can either respond directly to Jack's question or take the discussion in a different direction.)

"One example of the problem," Jane responds, "is the political parties, the Democrats and the Republicans. Each has developed a fairly good 'tunnel vision' on their ideas of how government should be run and oftentimes neither seems willing to listen to the other."

Jim, the next speaker in line, notes that a religion is also an ideology and when we commit ourselves to a particular religious ideology we tend to assume that no other religion gives us the truth, that only ours does. That, he says, is tunnel vision.

Others raise their hands, eager to develop the idea further. The discussion becomes increasingly thoughtful and lively, though determinedly friendly.

"Would you say that someone who has tunnel vision is narrow-minded?" asked one person. "You can be committed to an idea but not necessarily have tunnel vision."

"I don't think it's unnatural for one's ideology to create tunnel vision," Mark replied. "The fact is that some of us spend a great deal of time trying to figure out an ideology, to develop a religious or political belief, or a social construct for ourselves. Some of us inherit these things so we don't necessarily give them a lot of thought. But once you adopt an idea or belief you use it to kind of guide the rest of your life and to bounce other ideas off of it. I think this is common."

"Some ideologies split and fragment instead of being held together by tunnel vision. The history of Christianity is an example. Often groups have broken off and formed different sects. The whole Reformation was a reaction against Catholicism and the papacy so we ended up with more and more sub-sects of religion. So there was subdivision rather than staying on a narrow course."

context. "The idea itself does not create tunnel vision but the individual does," she said. "Other outside pressures and influences 'create' it. Perhaps the opposite of tunnel vision is 'scatter-brained.' An ideology gives us something to guide our thinking. Without it we would be scatter-brained. One can adopt a particular ideology but whether it leads to or results in tunnel

vision depends on the individual."

Another counters: "I disagree with you when you say that the individual rather than the ideology itself creates the tunnel vision. You can have someone who follows an ideology but does not have tunnel vision. A person can adopt an ideology but still be aware of what others see and believe, to understand what is causing them to react to various developments. This 'awareness' without tunnel vision may be what allows for compromise and negotiation."

"Perhaps the challenge for all of us may be to have enough answers or things to believe in to make our lives comfortable but still be open to other ideas and not reject ideas just because they are different or new."

And so it goes at Socrates Cafe. The Ancient Greek philosopher might not agree that those assembled at the Anchorage Senior Center are strictly abiding by his method, but he would certainly enjoy the lively discussions that develop most Friday mornings.

New participants are always welcome. Socrates Cafe is a delightful place to spend an hour and engage in discussion with people eager to exercise their minds.

Linda Cooper is a semi-retired program developer and legal assistant. She is a senior center volunteer and helps moderate Socrates Cafe.