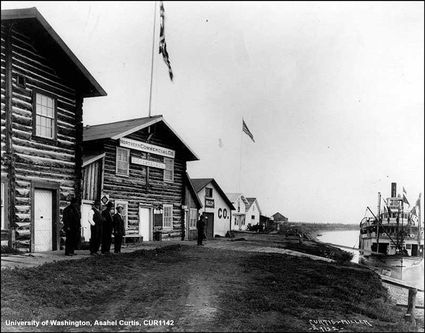 This shot of Circle City in the early 1900s shows sternwheeler Yukon tied up to the riverbank.

Enterprising newsmen published the first issue of the Yukon Press in March 1898. The 14-page effort shared the news of the day from St. Michael to the upper Yukon. With the discovery of gold along Interior rivers and in the Klondike region, thousands of stampeders flooded into the wilderness of Alaska looking for their pot of gold.

Circle City, located about 160 miles northeast of present-day Fairbanks, got its start in 1894 as the supply center for the Circle Mining District 50 miles to the southeast. In winter, it became a haven for gold miners who couldn't dig their frozen claims. Soon five general stores, two jewelers, two doctors' and two dentists' offices, an Episcopal Church, school, opera house, several dance halls and saloons and a few hundred log cabins lined the Yukon riverbank. It became known as "the largest log cabin city in the world." Some people called it the "Paris of the North."

And so the first issue of the Yukon Press, which previously had been printed in Fort Adams with a religious flavor, found a ready audience for news about steamboat movements, food supply, business opportunities and a liquor problem. There was an article about a hospital that soon would be opened, too.

The paper also sported some poems that reflected the winter isolation and the cost of whiskey, which was $20 a bottle (about $500 in 2017 dollars, although gold dust was used for payment of goods until 1902).

"It is said that there will be a separate governor for Alaska who will probably reside at Circle City," one column read, quite probably in protest that the seat of government had been located in Sitka from the time of Alaska's transfer from Russia to America in 1867. "Do let us have politics without denominationalism."

Between 1898 and 1899, nine issues of the Yukon Press spread happenings of the community to eager readers, including miners' meetings, social events and some national news. One quirky notice informed Circle City residents that their town would adhere to "standard time" based on the "celestial observations" of a Lt. Bemis. Another article announced a marriage contract between Aggie Dalton and Frank McGillis, with French Joe presiding.

"On the evening of November 10, 1898, a romantic union took place between Frank McGillis and Aggie Dalton, near the mouth of Dall River," the article stated. "Splicing was done by 'French Joe' (J. Durrant), and the form of the contract was as follows:

"Ten miles from the Yukon on the banks of this lake,

For a partner to Koyukuk, McGillis I take;

We have no preacher, and we have no ring,

It makes no difference, it's all the same thing."

"I swear by my gee-pole, under this tree,

A devoted husband to Aggie I always will be;

I'll love and protect her, this maiden so frail,

From those sourdough bums, on the Koyukuk trail."

I unite this couple in matrimony;

He be a rancher, she be a teacher,

I do the job up, just as well as a preacher."

After the ninth issue hit the newsstands, the press was returned to Fort Adams and then made its way to Rampart. Apparently those in Circle City missed their Yukon Press news, however, as City Commissioner C.E. Claypool wrote a letter to the editor of the Rampart Miner in 1901 reminding him of Circle City's existence.

"We unfortunately have no newspaper to publish our standing to the world, and while we rejoice in your good fortune, you must remember that the old camp at Circle is still on the earth ..."