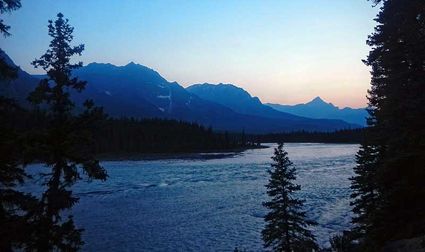 Sleep in a picnic area with this view, or a rest stop? You decide!

We roared out of Bennington, Vermont, to cover 977 miles the first day and somehow avoided speeding tickets.

This after deciding we did not like Bennington and would return to my mother's home town of Gloucester, Massachusetts, and so put the house up for sale. We worked on the house for over 10 months and it was high time to go on an adventure. And that would be to Dawson City, Yukon Territory, to participate in the Dawson City Riverside Arts Festival and then on to the family cabin across the bay from Homer.

In all parts of the country August means wrapping up road construction projects. We drove through them all on our way to Alaska.

In an attempt to dodge big cities we dropped down from Interstate 90 to 80 but were caught between miles of concrete barriers, large equipment and thundering noise south of Chicago.

My companion, Bruce Ware formerly of Tenakee Springs, Alaska, was driving our 2010 Toyota Prius. After 20-plus years in a village with no roads he managed it without freaking out, but swore never to do city driving again.

We quickly learned to recognize the red or orange construction signs from a distance and groan.

In British Columbia and the Yukon, slowing down for loose gravel was a regular occurrence, as was a lane ending with seemingly nothing going on. Puzzling.

We tried driving the Campbell Highway, a short cut between Watson Lake and Dawson City, but had to turn around after a construction guy said he "thought" we might make it but then I realized the packed dirt was turning to mud in the rain. If I still had my trusty '95 Toyota Tacoma with four-wheel drive I would have done it.

The Prius did perform admirably in wet conditions -- even the hail storm in British Columbia. The 40 miles per gallon was definitely appreciated.

While we were in the breadbasket of America, sadly the food was so bad we ate out of grocery stores.

In Amana, Iowa, a town with a historic agricultural tradition, we had the worst breakfast ever - just tasteless.

It was in Iowa that I noticed there were no bugs on the windshield.

Stopping for lunch at the Organic Farm Restaurant and Institute of Preventative Medicine in Waukee, we met Lalbhowandat Tiwari and his wife, Ahili, originally from French Guyana. For 17 years, they've been growing organic produce and teaching organic farming to local farmers, and serving a plates of delicious organic food.

I asked why there were no bugs and was told it was a combination of overuse of pesticides and the drought, and looking around, the trees did look droopy.

The insects returned in Wyoming with a vengeance. They purged their tiny lives on the windshield in spectacular colors of cream and orange, so much that visibility plummeted. The washer fluid only made it worse. Luckily we had Windex and I would recommend having it along.

We join the orphans of the night

We should have looked at a calendar and realized that we'd chosen the last weekend before school began. We left Edmonton, Alberta, for Banff National Park along with thousands of others.

We met one family from Queens, New York, who had booked a room four months in advance. We're not like that. My mother always told me I was left on the front doorstep by the gypsies and I have operated off that myth my whole life. I travel until I'm tired and then I throw my body down. It makes my son nuts because he can't track me.

But now that I travel with a 6-foot 1-inch guy instead of a clothes duffle propped against the passenger-side window with a baseball hat on it, it makes sleeping in rest stops and picnic areas less dicey.

As the night wore on, campgrounds filled up along the route, and although we found a quiet picnic site next to a river with a great view, Bruce was afraid we'd be "rousted" in the night by park employees. We would regret this decision.

From Banff and into Jasper National Park, it was the same - no vacancies anywhere.

Disturbingly, there were no bugs on the windshield in Iowa, but there were plenty of construction cones.

But there were too many of us for the parkies to control and we did end up in a rest stop where I slept in the back of the car and Bruce on the ground outside after suffering a bout of claustrophobia. We did not sleep well with passing trucks roaring by and cars pulling in leaving their headlights on.

We wistfully thought of that little spot we found earlier many times that night.

Although we had said we'd camp all the way, a good mattress, hot showers and flush toilets won out, but at a cost. Be warned. Motel 6 is under new ownership and a room is now over $80. No, they will not leave a light on for you.

To be continued: Onward through smoke to British Columbia and its own Bermuda Triangle -- Fort St. John. Buffalo herds in the road and the Anna True Driving Method.