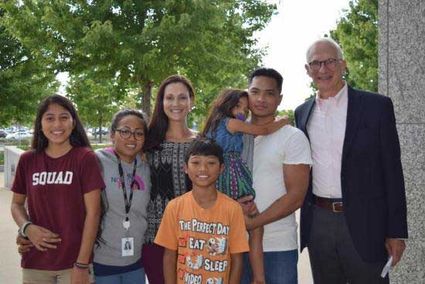 When Sameth Nhean, in white t-shirt, was detained and told he would be deported, he worried not only for his wife and their three children, but also for his father, who suffers from severe post-traumatic stress disorder (PTSD) and depression.

Aggressive deportation policies, like those that have been enacted since President Donald Trump's inauguration, tear families apart - including elders and the family caregivers they depend upon. Since 1980, the share of households headed by an immigrant has doubled (from 7 percent to 14 percent in 2012). In 2009, 16 percent of households headed by an immigrant were multi-generational, compared with 10 percent of households with a U.S.-born head. Many immigrant and refugee elders depend on their grown children for support for daily tasks, emotional support, or even fulltime caretaking. In Cambodian refugee communities, nearly two-thirds of older adults have been found to suffer from PTSD, and nearly all of those who survived the country's genocide in the late 1970s suffered from near-starvation and witnessed terrible violence.

When Sameth Nhean was detained and told he would be deported, he worried not only for his wife and their three children, but also for his father, who suffers from severe post-traumatic stress disorder (PTSD) and depression. His father had been living with his sister for eight years, but she could no longer care for him after her own child was born with special needs. Just as Nhean's father was getting ready to move in with Nhean's family, Nhean was thrown into immigrant detention. If he is deported, his father would have no place to go.

Since Nhean's detention, his family lost their three-bedroom home, forcing his wife, Sokha Kul, and their three children to move into to her mom's one-bedroom apartment. Debt collectors call every day as she struggles to support herself and her children with just one paycheck.

Nhean came to the U.S. as a refugee at the age of three. He was born in a Thai refugee camp after his family fled the Cambodian Khmer Rouge, and he has been a lawful permanent resident of the U.S. for 32 years. Like many refugees from Cambodia, he has overcome significant generational poverty and trauma. In 2002, he was charged with second degree assault with a dangerous weapon after trying to prevent his then-girlfriend from driving home while intoxicated. Nhean was sentenced to 21 months in jail but only served 90 days with probation.  Even so, DHS is trying to deport him to a country in which he has never set foot.

After almost a year in detention, a judge granted Sameth a 212(h) waiver canceling his deportation and allowing him to regain his green card. Despite the judge's finding that Sameth should reunite permanently with his family, the Trump Administration's Department of Homeland Security (DHS) plans to appeal the decision.

"I don't understand why this government wants to waste time and taxpayer dollars to deport Sameth, a loving father and husband who is clearly not a threat to anybody," said Nhean's wife, Sokha Kul. "It saddens me to see how cold and heartless this Administration has become." 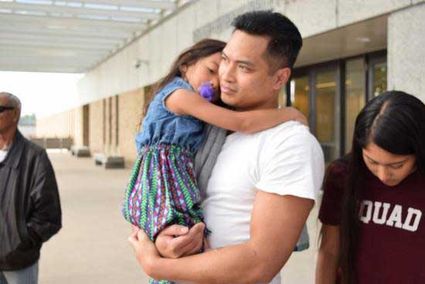 After almost a year in detention, a judge granted Sameth a waiver canceling his deportation and allowing him to regain his green card. But despite the judge's finding that Sameth should reunite permanently with his family, the Department of Homeland Security plans to appeal the decision.

Quyen Dinh, executive director of the Southeast Asia Resource Action Center (SEARAC), added, "The Trump Administration does not care that its policies have real consequences for entire families, including devastating impacts on children and elders. The administration has attacked the very foundation of our immigration and humanitarian systems, from the Muslim and refugee ban, to the indiscriminate dragnets of immigrant families for deportation, to supporting this week's nativist RAISE Act, which would eviscerate family-based immigration programs and drastically slash refugee admissions. We condemn this Administration's ongoing attack on immigrant families and demand justice for Sameth and others facing unjust deportation."

Mari Quenemoen is the Director of Development and Communications at the Southeast Asia Resource Action Center (SEARAC) in Washington, D.C. This article originally appeared on the Diverse Elders Coalition website, http://www.diverseelders.org.