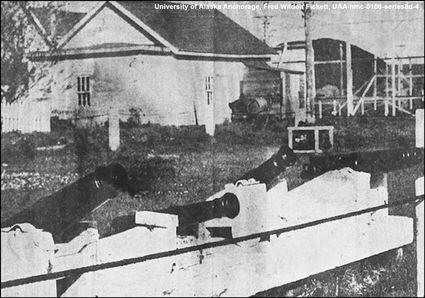 Four bronze cannons, seen here in Unalaska in the late 1950s, traveled from the Aleutians to Seattle to Sitka in 1961. They now guard the hill where Lord Baranof built his castle in the early 1800s.

Four small cannons in Sitka, which started out in Unalaska, stand in testimony to Alaska's occupation by Russia and the subsequent transfer of Alaska to America 150 years ago. The Northern Commercial Company in Unalaska donated the cannons to the state of Alaska two years after statehood.

The artifacts date back to the 1700s, when Lord Baranof ruled Alaska for Russia as its manager and governor. The antique guns, made of bronze, weighed about 500 pounds each and had the date 1723 stamped on them. Researchers think they arrived in the Aleutians when Baranof wintered there in 1790.

The relics went to Sitka because the state Parks and Recreation Department planned to place them near a Russian blockhouse being rebuilt as a historic site. Since there was no direct route via steamship between Unalaska and Sitka in 1961, Northern Commercial employees shipped the cannons to Seattle for reshipment to Sitka.

Although the cannons had spent a couple hundred years off the beaten path of civilization, thousands had viewed them before they left the Aleutians. Over the years Natives, Russians, gold-rush prospectors, commercial fishermen and World War II participants passed through Unalaska by the droves.

Unalaska is one of the oldest settlements in Alaska, according to researchers. The Unangan people inhabited the island of Unalaska about 9,000 years ago, based on artifacts found in the area. They named it Agunalaksh, which means "near the peninsula." The people developed an intricate and complex society over thousands of years.

The community overlooks Iliuliuk Bay and Dutch Harbor, about 800 air miles from Anchorage. More than 3,000 Unangans, called Aleuts by the Russians, lived in 24 settlements on Unalaska and Amaknak islands by 1759.

When Russians arrived in 1768, they renamed the island "Ounalashka" and used it as a trading port for the fur seal industry. The Russians had enslaved many Native hunters and their families by 1787 and moved them to the Pribilof Islands to work the fur seal harvest for the Russian American Company.

The Russian Orthodox Church of the Holy Ascension of Christ was built in Unalaska in 1825. It's the oldest cruciform-style Russian church in the country. And its famous founding priest, Ivan Veniaminov, worked closely with the Natives and created the first Aleut writing system. He then translated scripture into Aleut.

The Aleut population dwindled due to disease and poor working conditions during this time, and by 1840 only a few hundred Natives remained in Unalaska.

The new home for the cannons also has a deep Russian connection. Baranof extended the Russian colony into Southeast Alaska in 1799, near what now is Sitka, and renamed it Redoubt Saint Michael. At first the Tlingits of Old Sitka welcomed them, but in 1802, the Natives attacked the Russian post while Baranof was away. Baranof retaliated in 1804 with the use of a Russian naval ship, the Neva, which was armed with many cannons. He then rebuilt the Russian fort, renamed it New Archangel and it served as the capital of Russian America until the United States purchased Alaska.

The donated cannons from this era now guard the Castle Hill State Historic Site, where the official transfer of Alaska from Russia to the United States occurred on October 18, 1867.

This column features stories from late Alaska historian Phyllis Downing Carlson and her niece, Laurel Downing Bill. Many of these stories fill the pages of "Aunt Phil's Trunk," a five-book series available at bookstores and gift shops throughout Alaska, as well as online at http://www.auntphilstrunk.com.