By Ken Green
For Senior Voice

Summer's a wrap in Cooper Landing 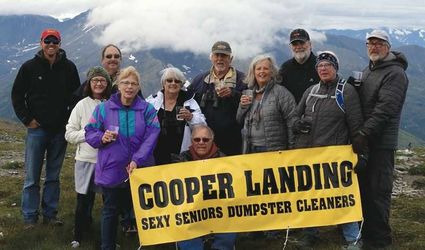 We've had a great 2017 summer at Cooper Landing Senior Citizens Corporation Inc. (CLSCCI) in spite of the often rainy weather (alas Eclipse Day 21 August was clouded in and raining). So great in fact it seems that we neglected to report in to the Senior Voice on our activities. So here's what's been happening on the Upper Kenai River at Kenai Lake.

CLSCCI's President, Ron Sloan, resigned and was replaced. Ken Green stepped up to take the reins in July and appears to be surviving. Mayme Ohnemus was called away by family matters, but her planned Top of the Mountain Helicopter Flight on Aug. 7 was taken over and completed by Linda Raveaux. The landing site was atop Cecil Rhode Mountain next to the communications array and was quite spectacular for champagne, cheese and crackers, and photo opportunities.

The Hope site cleanup was graciously taken over by a local woman from Hope, Laurie LeFrance, saving the Sexy Senior Dumpster Cleaners the long weekly round trip for the Senior Bus or a volunteer. The annual SSDC appreciation luncheon was celebrated as usual at the Kenai Princess dining hall on Aug. 17. In attendance was Mayor Navarre, who is ending his tenure as Kenai Borough Mayor this year. Mayme Ohnemus made it back for the event and gave a 20 year slide show of SSDC photographs and stories.

Stepping back a week or so, CLSCCI held its quarterly general meeting at Eagle's View Commons. A welcome was given to CLSCCI new resident Gretchen Alexander coming from Vintage Pointe Senior Housing in Kenai. ANCOR was mentioned gratefully for finishing the Snug Harbor pavement project that brought asphalt all the way up Campus Drive to the CLSCCI complex.

After an enjoyable potluck lunch, Jean "Nana" Sether presented an amusing Hysterical Historical Hat Show – with local seniors modeling. Becky Cronkhite followed with a presentation about the Kenai Peninsula Borough's Comprehensive Plan Update from the borough, and listened to the concerns and suggestions from the seniors about the future of our area. A notable concern was the future safety of the Kenai River environment, trails and roadways.

The All-You-Can-Eat Soup Supper on Sept. 10 was a great hit, as it has been every year. A large selection of delicious soups, chilies and curries were available along with a myriad of tasty deserts. All had a good time, put on a few pounds and CLSCCI raised funds for the center. Some guests from The Hutch even timed their fishing trips to correspond with this fun event. Thanks to the organization skills of Teresa Norris and Jean Nierenberg.

So in summary, we report a wonderful summer of activities from Cooper Landing. However, due to various circumstances the summer Flea Market and the Pancake Breakfast did not happen this year. We hope to correct that in 2018.