Part two in a cross-country travelogue 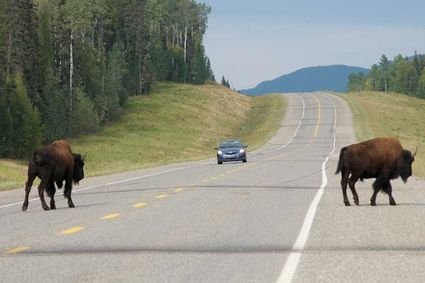 The buffalo herd out of Liard Hot Springs has grown and crosses the road at will.

We hit the Alaska Highway after escaping British Columbia's own Bermuda Triangle - Fort St. John. Like a scene from the movie "Groundhog Day," where the main character repeats the same day over and over until they attain a higher consciousness, we circled that town in a desperate attempt to go in the right direction.

Leaving Fort St. John, or so we thought, I suddenly realized the sun was on my left, signaling we were traveling south and not north.

Amazingly, we maintained emotional equilibrium and did not attain the self-destructive interior road rage that causes the driver to perform a spectacular vehicular swan dive off a scenic outlook or, after a toilet break, to sadly but resolutely leave the other person's belongings on the tarmac while they're in the crapper just to quiet the loud accusations and denials of responsibility for the hours-long detour.

On the way back, we realized we hadn't needed to even go through Fort St. John - the map was just not accurate in that little corner of the fold. Yes, we are Luddites and do not have GPS, favoring instead maps and compasses. It makes traveling more challenging and a better brain-tease (see above about going in the wrong direction).

Driving through British Columbia with less traffic and patrols allowed me to employ the Anna True Driving Method. Late of Skagway, Anna once said to me on one of our jaunts up the South Klondike Highway from Skagway to Carcross, "No one else is on the road, why not use the whole thing?"

Truly, driving down the middle of the road through wildlife corridors, as they are called in BC, allowed me a better perspective of large mammals on either side of the road and a better chance of avoiding them. Big hint: if a mammal has its head pointing toward the road with its body perpendicular to it, they're gonna cross. Stop the vehicle.

We managed to miss everything - buffalo, elk, moose, rabbits, bears - except for one little red squirrel that I couldn't avoid.

We saw lots of road kill and it was much more than I've ever seen before on Canadian or Alaska roads. Especially sad was the beautiful lynx. And do remember that porcupines are very slow moving - they were the majority of the roadkill.

Places to pay the most attention are before and after Watson Lake and around Liard Hot Springs, where the small herd of buffalo I saw 20 years ago has now swelled to three herds with 20 to 30, complete with females, calves and huge bulls. There's also a number of sexually immature males in between, biding their time.

Be particularly aware of moose at dawn and dusk on the Taylor Highway that connects Dawson City, Yukon Territory, to the Taylor Highway that in turn joins the Alaska Highway. I believe moose are shape-shifters. From a distance they can look like several people walking. They disappear into the woods, are not very visible because of a dull hide and eyes that don't reflect light.

I fear moose more than bears. They're cranky, unpredictable and have articulated knees that can kick sideways like a ninja. And I never want to hit one because I've seen those struck vehicles on the side of the road. Not pretty.

Visual acuity and the landscape

As technology crowds our daily lives, with millions of Americans turning into smart phone zombies, I wonder what will happen to a person's visual acuity or the ability to see the sweep of the landscape, its natural pattern. It saddens me to see parents adding a video screen to their car so the kids won't be bored on drives. I saw one family do that in Skagway where the road to Whitehorse travels through some of the most gorgeous scenery in Alaska.

The late Rosabelle Rexford of Utqiagvik was prized by the local search and rescue for her ability to see anomalies in the landscape from a helicopter and see people missing in the vast tundra or iced-over and snow-covered land.

And so it is when driving remote roads. Being able to pick out those oddities in the landscape is a vital skill to have because it can mean life or death.

The West was and continues to burn this summer and fall. Montana was on fire and so was British Columbia and Alberta in Canada, but luckily we experienced smoke and not outright forest fires.

On the way up there was smoke in Banff National Park in Alberta, but it was much worse on the way back.

Through Banff and Jasper we did just pull over and sleep as long as we needed - sometimes for a few hours or the whole night - and on occasion wake up with our throats burning.

Do have your mechanic check the cabin filter after driving through smoke. Ours was called "gunky" when it was changed at the end of the trip.

The Campbell Highway out of Watson Lake looked to be a shortcut to Dawson City by way of Ross River and Faro, thereby avoiding Whitehorse on the way up.

Feeling like we had made a better decision than other drivers opting for the Alaska Highway, we turned off and made our way first through gravel patches, then packed dirt, then wet packed dirt where the car started to fishtail no matter how slow we went. 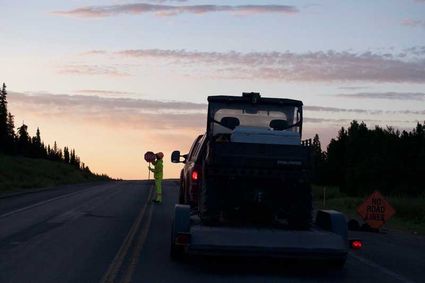 After spending a night in the car watching Northern Lights over the Canadian Rockies, dawn breaks over a construction area.

We stopped and we approached by an Environmental Canada employee in a truck who said with a smile on his face that he had seen cars like ours make it up the highway.

We knew what that meant and turned around. While the 2010 Prius II had performed and continued to perform solidly throughout the trip, I knew from driving roads like that in my 1995 Toyota Tacoma for 20 years in Alaska that you really need four-wheel drive.

There was so much roadwork on this trip that it ceased to bother us. We waved a thanks to the flaggers and saluted the workers as we went by and hoped that, should we ever make this trip again (we won't we swore), that all the construction would be over and we'd clip along with no fear of flying gravel.