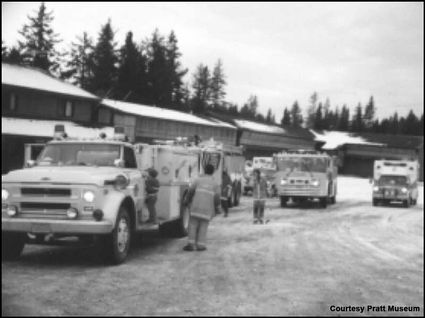 Homer residents turned to Betty Crocker when they needed a firetruck in the late 1960s after learning about a promotion offered by General Mills. The nationally known company offered a program where people could turn in their coupons for large househlold items. An $800 piano could be purchased with 160,000 coupons redeemed at one-half penny each, according to a Homer Tribune article, titled "Bringing home 'Betty," by Naomi Klouda.

How many coupons did it take to get a fire truck? Five million, which equaled about $25,000 in 1969 – about $166,000 in 2017 dollars. And even though that was an enormous sum, the Homer Volunteer Fire Department women's auxiliary in 1968 and 1969 set out to purchase one on the power of coupons found on items like sacks of flour, cans of Campbell's soup and Betty Crocker cake mixes.

Reporter Klouda found one of the original organizers, Helen Jackson, still had files of memorabilia and documents relating to the effort. In one letter she thanked an Elmendorf Air Force group that had gathered up a giant garbage bag full of coupons.

"Quite frankly, if it weren't for the warm, genuine, friendly letters and notes of encouragement and interest from literally all over the United States and from all ages and walks of life, we who started the first little snowball on its way would have quit months ago," Jackson wrote. "This is not an easy way to get a fire truck."

But the Homer residents knew it was possible, because another Alaska community had saved General Mills coupons in 1964 for a vehicle. The Copper Valley School in Glennallen organized a campaign and collected 1.5 million coupons to trade in for a new school bus.

When the rest of the nation heard about Homer's effort to get a much-needed fire truck, coupons from all 50 states arrived at the Homer Volunteer Fire Department from school children, Boy Scouts, Lions Clubs, military families and locals. By the time they had enough coupons to buy the fire truck, a publicity campaign had let the world know of life in Homer.

A fact sheet shared that Homer's nearest fire department was 80 miles away in Kenai. It also stated that Homer citizens had started the fire department as a nonprofit organization on Feb. 10, 1954, and their equipment included relics from days gone by.

By 1969, the auxiliary had enough coupons to redeem for a firetruck.

Homer women Edna Morris and Helen Jackson processed most of the coupons. Jackson recalled the many toiling hours spent clipping away excess cardboard from the coupons, then counting them into bundles of 100 points. The final push to the post office involved neatly packaging the coupons into boxes for shipment to General Mills.

"We were not prepared to cope with the avalanche of mail requiring replies, nor did we realize the cost of the postage that would be involved in the project," Jackson later said.

Ray Kranich, one of the volunteers who helped build the fire station on land donated by Hugh Watson, said the nonprofit operated through fund drives and donations before the Great Earthquake of 1964. Following the city's incorporation in 1964, the city issued a monthly check to the fire department for operations, fuel and maintenance. But when the need for a new fire truck arose in 1969, the city didn't have the money to buy one.

The "Betty" truck story represented a time of independence in the community, said Kranich, who was serving as the fire chief when the fire truck arrived in Homer.

"In times past, the government didn't do for the people, the people did for themselves," Kranich said. "This is a lost philosophy today."

The bright yellow fire engine, built in Orangeville, California, in 1971, arrived just before Christmas that year.

Throughout the years, Engine No. 2, or the "Betty" truck as it was called, responded to numerous fires in the area, the brightest firefighter in the arsenal that included a 1947 World War II vintage Willies Jeep.