By Ken Stephens
The Active Age 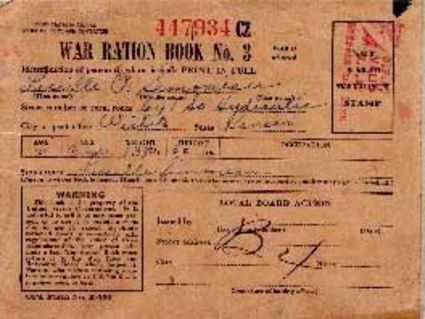 During World War II and for a while after, the U.S. government issued ration books to control purchase of many commodities, from sugar to clothing to gasoline.

To author Studs Terkel, World War II was The Good War. And to Tom Brokaw, those who lived through it were The Greatest Generation.

Sacrifice was the order of the day. And, as Betty Curtis and Carmen Suter can tell you, everyone made sacrifices every day.

"I wouldn't go through it again for anything, but it created an interesting generation

of people," said Curtis, who was 13 and living in Delphos, Kansas, about 60 miles north of Salina, when the Japanese bombed Pearl Harbor on Dec. 7, 1941.

On the home front, everything from sugar, canned goods, meat, shoes, clothing, gasoline, tires and more was rationed during the war and even for a couple of years afterward.

Sugar supplies were limited because we couldn't import it from the Philippines, which was cut off by the Japanese. It was nearly impossible to get new tires because the Japanese also were in control in Southeast Asia, where most of the rubber plantations were. Even shoes with rubber soles

Canned foods were rationed because most were being sent to soldiers overseas or allies like Great Britain. German submarines had stopped a lot of food and other essentials from getting through.

The book was about five inches wide and four inches tall. Some stamps had pictures of tanks, ships or planes. Others had letter codes for specific commodities, such as gasoline, or point values.

Each person was allowed 48 points a month for canned goods, and that wouldn't buy much. A 20-ounce can of corn required 14 points, a 30-ounce can of peaches was 21 and a 15-ounce can of asparagus was 14.

But the asparagus would put you one point over your ration for the month. Better put it back and get a couple 10.5-ounce cans of soup, 6 points each, instead.

The last line on the instruction page of each book pleaded: "If you don't need it, DON'T BUY IT."

Sugar was the first item rationed in 1942. Curtis and Suter recalled it vividly. Curtis said her mother "was always watching for flour and sugar."

Suter, who grew up in Danville, Kansas, between Harper and Argonia, was four when the U.S. entered the war. She said her mother reserved the bulk of the family's sugar ration for cooking, then divided up the rest among the four members of the family

to use in drinks or on cereal.

Families were encouraged to supplement their food supply by growing a Victory Garden. At its peak, 20 million families had gardens, producing 40 percent of the nation's fruits and vegetables.

"We grew a garden, the whole back yard," Curtis said. One year there was an abundant crop of green beans.

"My mother had a big copper boiler that set across two burners on the coal-oil stove. She snapped and canned green beans. If we had nothing else to eat, we would always have green beans and tomatoes ...You didn't go hungry."

Curtis recalled that her mother would call the grocer with her list, then dispatch Betty and her sister, Ruth, with the family ration book, to collect the order. The grocer would put the bill on the family's tab, a practice once customary in small town stores.

"Our parents would pay when they got the money," she said. "My father was a minister, and his pay depended on the collection. There were times when my father went a month without a paycheck."

Blackout curtains to keep any light from seeping out at night were mandatory, even though Kansas was well beyond the range of any German or Japanese aircraft.

Suter's father, a Danville air raid marshal, would go out at night with his shielded flashlight and look for anybody who didn't have their curtains closed enough.

Posters urging people to buy war bonds were everywhere. If you didn't have at least $25 for a bond, you spent your spare change on savings stamps that you pasted into a book until you had enough for a bond.

In a family scrapbook, Curtis has the program for a war bond rally on April 30, 1943. Admission was buying one defense savings stamp: 25 cents for adults, a dime for children.

There were many other inescapable reminders that we were a nation at war.

With most of the young men in the military, there wasn't enough manpower to harvest the crops. Germans from a prisoner of war camp near Concordia were sent to area farms to help out.

Curtis said her grandparents had come from Germany, and her father, though born in the United States, spoke German.

"He...told those guys what to do," she said. "They were just kids a long way from home."

In Argonia, Kansas, where Suter's family moved during the war, a big "Honor Roll" billboard on a vacant lot across from the bank bore the names of all the local men serving in the military.

"Every day you'd walk past the billboard to see who had gold stars."

Gold stars meant that they had been killed in action.

Suter remembers a family shopping trip to Anthony in August 1945. The theater had cardboard icicles hanging from the marquee to advertise that it had air conditioning, a rarity in those days. Word reached Anthony that the Japanese had surrendered.

"All of a sudden, the sirens go off, horns started honking and people were streaming out of the theater," she said. People started hugging each other. The war was over.