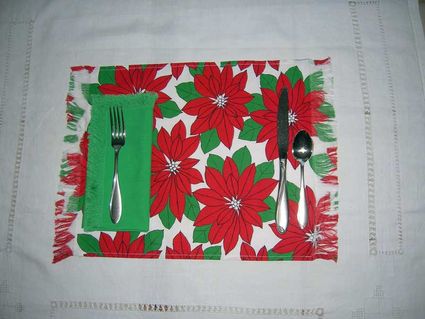 A set of homemade napkins and placemats, made decades ago, re-emerged and have been happily put in use.

While growing up in Glennallen, I was involved in 4-H and took several classes including basic sewing. The year I turned eleven (1966), I decided to make cloth placemats and napkins for our family of six to use for Christmas. Mom paid for the fabric I picked out at our local grocery/department store, owned by the Martin family.

I cut out the placemats and napkins according to the 4-H pattern, which called for all four edges of the napkins to be fringed as well as two edges of the placemats. I wanted enough for company, so I made twelve. That's hours and hours of fringing, using a sewing pin to loosen each thread. Of course we had no TV or the other time-consumers that are available nowadays, so it didn't really matter.

Compared to the usual plastic tablecloth backed with flocking that we used for all special holiday meals, I thought the Christmas dinner table looked extremely attractive set with my poinsettia-

After dinner there was a problem. Noticing food on some of the napkins, I said I'd put them in the dirty clothes hamper so they would go with us the next time we went to the laundromat. Mom said no. She insisted that I run a seam of stiches around all the fringed edges, or at least on the fringed edges of the placemats, so they wouldn't further fray in the washing machine. I was very troubled by this. I didn't think it would look very nice for one thing, the pattern didn't call for it, and I'd already been taught to only sew clean cloth in the

I folded up my creations and put them in a box and as far as I know, they were never used again. I finished school, got married, and embarked on a life of my own. I'd forgotten about them, until my sisters and I were going through old family belongings in Glennallen in 2000. As one box was opened and I saw the contents, I immediately knew what they were and the memories came flooding back. I claimed them and took them home to my house in Slana, throwing them in a box with my other old stuff.

Life goes on and my husband and I eventually moved back to Palmer in 2011. The placemats and napkins resurfaced last November when I was looking for something else. Again, I had forgotten about them. But, this time I shook out a napkin wondering if I might be able to currently use it, or if not, it was time to get rid of them.

I was horrified to find dried food on the napkin! I'd forgotten that detail and decided to check the others. Nine out of the twelve napkins had grease spots or dried food on them. We must have had company for dinner in 1966. I wondered about my sanity as I pretreated almost 50-year-old food stains before throwing everything in the washing machine. But, they turned out fine – no further fraying as Mom had worried. In fact, they are right in style as I recall seeing similarly fringed napkins purposefully placed in the water goblets at the fancy restaurant my husband took me to for my 60th birthday.

My newly resurrected linens were quite the conversation piece last November at a small family Thanksgiving gathering in Anchorage and this year will be tucked in a suitcase bound for Christmas celebrations in Colorado.