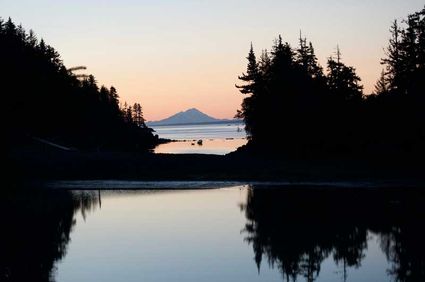 Mount Redoubt is silhouetted in sunset glow in this view from travel writer Dimitra Lavrakas' family cabin in Kachemak Bay, outside of Homer. It was the final destination of the colorful, week-long cross country road trip she's been documenting.

Part three in a series.

The trails of wood smoke far behind us, we arrived in Dawson City, Yukon Territory, for its Riverside Arts Festival that coincided with Discovery Days. Annually, the 160 placer and hard rock miners take time off and flood the town for to celebrate the Klondike Gold Rush of 1898. As the rush's epicenter, Dawson is a time capsule with dirt streets, historic building preserved by Parks Canada and a few left in their original state. I love this place.

Busy weekend in the Klondike

We had a table at the festival, which is sponsored by the Klondike Institute of Arts & Culture, housed in historic Odd Fellows Hall. They sell a T-shirt with ODD in large letters and "gallery" underneath in smaller letters – a great thing to wear if you want to be left alone.

I like to stay at Bombay Peggy's, Klondike Kate's cabins or cheaply at The Bunkhouse, but this is a big weekend and there were no in-town vacancies.

So it was across the Yukon River, thanks to the 24/7 free George Black Ferry to Dieter Reinmuth's Riverside Hostel. This is a basic place - no electricity, just a private room with solar lights, no heat, a double bed and a bunk bed, a sauna, and a "miner's bath,' where you heat water in a stove and just outhouses (more on them later). All for $50 CDN.

Relatively quiet with tenters sleeping in the field in front of the rows of rooms, about 1:30 a.m., a group of motorcyclists drove their bikes in. At 4:30 a.m., after a raucous round of drinking, they played "Friends in Low Places" at ear-splitting level. Dressed down by Dieter they admitted a friend had died and that was how they paid homage to him. Bruce as an ex-biker thought this was cool and we were the only ones outside to witness the spectacle.

As the oldest and farthest north gambling hall, Diamond Tooth Gertie's is a fun place to go with its Can-Can dancers, to have a drink and play poker, blackjack, the one-armed bandits or spin the roulette wheel.

I've always made at least a couple hundred dollars on a $20 bill, but I was saddened to see the old mechanical slot machines had been changed out for modern digital machines and I won nothing! The end of an era.

Over the Top of the World Highway and down the Taylor, and up the Alaska Highway and we made it overnight to Anchorage in time to surprise a friend in Eagle River at Tinker's Café.

Somewhere along the way, we pulled over and slept for a couple of hours after dodging moose along the road and seeing a car in a ditch with its windshield shattered. It seemed prudent to wait until light.

The same day, we made Homer and across Kachemak Bay to the family cabin in Tutka Bay for a week without a car or even moving around much. There were views to savor and books to read, adjust catching up with ourselves before the turnaround and push across the country again and home.

In our travels we learned many things. Some truisms that hold across the land:

1. There is a table of grumpy old men in every town complaining about their aches and pains.

2. In the Midwest, trains miles long carried minerals, oil and grain. It wasn't until I saw them that it hit me how important trains still are to the economy of the U.S. and Canada.

3. In Montana there was a stark example of what happens to a small town when it experiences a boom and bust from extractive energy projects. In searching for a place to eat, a desolate Kevin, Montana, which lost over 15 percent of its population since 2000, really shocked us. Other towns seemed to be trying new ways to survive by adding solar and wind power grids along the highways.

4. A Prius with Vermont plates seemed to enrage people, particularly in British Columbia and Alaska. We were "coaled" in BC by a truck, and a camper truck let us pass on a truck lane coming out of Soldotna but raced us to the lane end once we passed and they saw the plate. Then it thundered after us all the way to Girdwood, where we pulled way ahead and tucked quickly into the parking lot at the bakery hoping they'd think we were long gone. If you want tourists to support the economy don't be a jerk on the highways or the state gets a bad reputation.

5. Traveling has changed so much over the years. With tinted windows you can't wave at another driver because they can't see you. I remember a time when everyone waved to each other on remote routes. And everyone is on their smart phones making it impossible to connect with them as a human being and share experiences or tips on traveling. 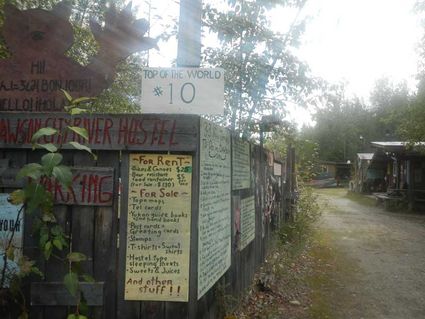 6. Pay attention to the vehicle you're driving. That night of the incredible lightning storm in Wyoming, I kept asking Bruce what were we driving through - was there rock walls on either side of us? No, he said, it was flat plains. Well I couldn't tell because the passenger side headlight was out! Somehow we drove hundreds if not thousands of miles with a dead bulb. Got that fixed in Anchorage, where we did believe many people in the service industry were stoned to the gills but very pleasant to deal with and seemed happier at their jobs than one would ever have thought possible.

7. We'll never do this again. It was an adventure to be sure, but we ended up thinking it was best to pick a particular location to focus on so we'd have the time to explore. Fly and rent a car, that's the ticket. Although we did look longingly at Volkswagen campers and smaller RVs. But with a Prius you just save so much in fuel costs that it's hard to imagine driving something larger.