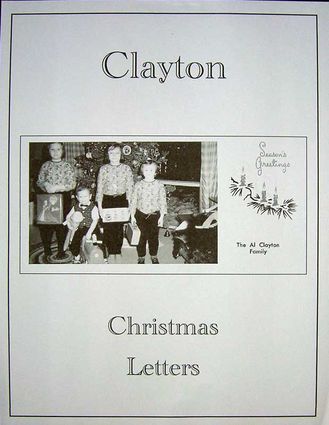 Form letters can be compiled and bound into family albums, preserving memories over the years.

Form Christmas letters. Whether they arrive by snail mail or email, people seem to either love or hate these annual family newsletters.

Let me just state up front that I am a fan. Because my mother embraced this particular tradition, her children and grandchildren now have a wonderful treasure of family history.

Dad arrived in Anchorage in January 1940 from Montana and Mom came to Seward in 1951 from New York. They married in 1954. As far as we know, Mom wrote her first Christmas letter while they lived in a house on 25th Avenue in Spenard in 1959. With three little girls age four and under, she was most likely a busy mother and homemaker and figured it was either a form letter or no letter that year. So began her almost 40-year tradition.

With no relatives in Alaska, Mom and Dad wanted to stay in touch with the many family and friends scattered throughout the lower 48 states. She usually added a personal note at the end of the letter or on the back, answering questions from incoming cards and letters or asking some questions of her own. Dad helped by addressing envelopes and taking care of his side of the family. As we got older, we kids helped, too.

The move to Glennallen in 1963 made logistics harder. Mom would handwrite her letter and then snail mail it to a typing service in Anchorage. After she received the typed letter by return mail, she would then make any corrections needed. Once or twice when time was short, she took the chance that it contained no mistakes and ordered the printing without proofreading. We kids were then enlisted to help correct 100 copies.

Mom's annual letters didn't read like a brag sheet, as some complain. They were more like a report to loved ones far away who wanted to know what our family was doing all year up here in the frozen North Country. She covered a wide array of topics, including the introduction of each of their 16 grandchildren through the years.

About 20 years ago, family friends showed me their three-ring-binder featuring more than 20 years of their annual Christmas letter. I was truly impressed and immediately decided to do the same with my letters. Yes, I admit I've followed my mother's example since my marriage in 1973.

After Dad died in 2008, my siblings and I had much sorting and organizing to do in three locations around the state. One of my goals was to gather all Mom's leftover Christmas letters as well as the family photos that sometimes accompanied them and make an album for each of us four kids.

After a couple of years, I realized there was enough material to make albums for the grandchildren, too, filling in with copies as needed. Since most of the letters were on legal size paper, I bought legal size binders and sheet protectors.

After all that prep work, the actual assembly went quickly. Then I created simple cover papers featuring

a 1963 Christmas photo and taped them to the binder fronts. Each sibling received their album and enough to pass on to their children.

It's surprising how many times I've used mine as a family history reference book. When visiting various family members' homes, I'm delighted to find Clayton Christmas Letters albums holding places of honor on bookshelves. Mom left us a wonderful legacy.