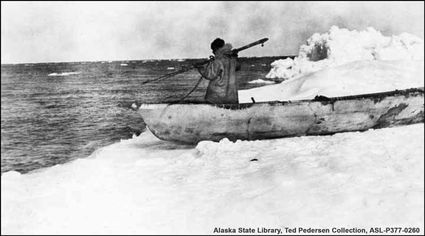 Alaska's Native people hunted and fished across the Great Land for millennia.

More than four decades ago Congress enacted the Alaska Native Land Claims Settlement Act, which conveyed about 40 million acres to Alaska Native-owned corporations and settled aboriginal land claims. President Richard M. Nixon signed it into law in December 1971. Why was the Native land claims such a big issue after statehood?

The Alaska Statehood Act said the new state could choose more than 103 million acres of its land – an amount larger in total area than California – to build its economy. Before Alaska became a state, we had more than 50 different federal government agencies in charge of Alaska's affairs. Now we had to set up the court system, administrative offices and everything else that makes a state go. And that all takes money.

But the statehood act also had a disclaimer that said the new state and its people disclaimed all right or title to lands that "may be held by Eskimos, Indians or Aleuts" or held in trust for them. That language set the stage for a land rights battle and settlement of mammoth proportions.

As the state attempted to choose its land, Alaska's Native people were claiming much of the land was theirs. For eons they and their ancestors had hunted, fished and picked berries across the vast land. The Russians hadn't conquered them, nor had the Americans, and they hadn't ever given up title to their land. But after Alaska became part of America, miners were allowed to stake claims on Native land, people could apply for homesteads on their land and even the federal government could occupy their land for logging and other purposes.

A court ruling in 1959 bolstered Native's claims when a lawsuit earlier brought by Indians in Southeast Alaska was ruled in their favor. The judgment stated, in part, that the Tlingits and Haidas had established their use and title to the lands and waters of virtually all of southeast Alaska and that the U.S. government had failed to protect the rights of the Indians when it allowed others to occupy their land.

The issue of who owned what land heated up after that ruling and throughout the 1960s. It came to a head when that massive oil field was discovered at Prudhoe Bay. The oil industry wanted to build a pipeline, but it would not lay out billions of dollars if the state did not have clear title to the land across which that pipeline would stretch.

After a couple more years of negotiations with Congress, a compromise and settlement was reached. Alaska's Native people settled for almost $1 billion and 40 million acres of land. The settlement signed on Dec. 18, 1971, also set up 13 Native regional corporations – 12 for Alaska Natives residing in Alaska and one for Natives who no longer lived in the state.

Alaska's First People then had to learn how to organize, enroll shareholders and run businesses. Tlingit John Hope, a Juneau resident involved in the land claims issue, later summed up the years of Native adjustment to a corporate world in a newspaper article.

"It's like you and I never saw a baseball game in our lives," Hope said. "We'd never seen mitts or bats or baseballs. All of a sudden you were told, 'Here's your mitts. Here's your bats. Here's your balls. Tomorrow you play the Yankees.'"

Forty-six years later, Alaska's Native people have proved they were up for the challenge and now many are in the big leagues themselves.