Visit somewhere safe for the holidays 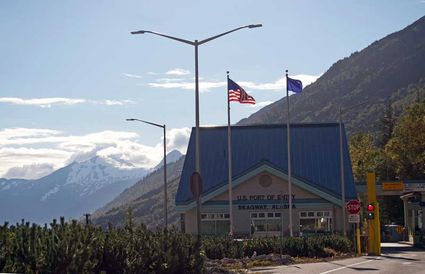 There is most likely not another setting for a customs house as spectacular as the one in Skagway, perched high on a cliff overlooking the Skagway River.

It's hard to ignore the headlines of terrorist attacks on tourists or random acts of violence involving crowds, particularly at popular tourist sites and entertainment venues. It is a sad and frightening time to travel. What to do?

The Department of State recently alerted U.S. citizens to the heightened risk of terrorist attacks throughout Europe, particularly during the holiday season, advising U.S. citizens should exercise caution at holiday festivals and events through Jan. 31, 2018.

"Recent, widely-reported incidents in France, Russia, Sweden, the United Kingdom, Spain and Finland demonstrate that the Islamic State of Iraq and ash-Sham (ISIS or Da'esh), al-Qa'ida, and their affiliates have the ability to plan and execute terrorist attacks in Europe. Last year, mass casualty attacks occurred at a Christmas market in Berlin, Germany in December and a nightclub in Istanbul, Turkey on New Year's Eve. While local governments continue counterterrorism operations, the Department remains concerned about the potential for future terrorist attacks. U.S. citizens should always be alert to the possibility that terrorist sympathizers or self-radicalized extremists may conduct attacks with little or no warning," according to the State Department alert.

To keep up with alerts, go to the department's website https://travel.state.gov/content/passports/en/alertswarnings.html

Trip.com recently released a list of the 10 most dangerous places for solo female travelers that include Egypt, Morocco, Jamaica – where it is advised to stay within a resort's boundary – India, Peru, Bahamas, Columbia, Ecuador, Turkey and Guatamala.

It is advisable to dress modestly, wear a headscarf in Muslim countries, be careful when served cocktails because they sometimes can be laced with drugs, and know a few phrases in the local language to smooth relations.

Thinking outside the (gift) box

With wars, mass expulsions of certain ethnic groups from famine, effects on local industries like farming and fishing due to climate change, there are now millions of displaced people roaming the world looking to merely survive.

While it's helpful to continue to travel and support countries by spending your tourism dollar, consider this: With Christmas coming up it also might be helpful to give material aid in the form of domesticated animals or a hive of bees. I like Heifer International, where a flock of ducks or chicks is a mere $20. I give a gift to my nephew hoping that it instills compassion in him and an awareness of the world beyond his front door.

See their catalogue at https://www.heifer.org/gift-catalog/index.html.

There is also OXFAM, a support agency that responded to the famine in Greece after World War II when the British blockaded the country in an attempt to quell a civil war between royalists and communists. You can donate a clean toilet - and what Alaskan doesn't understand the importance of that? - for $50 at https://www.oxfamgifts.com/gift-category/all-gifts.

Both agencies also serve the U.S.

Yeah, we don't need no stinking papers, say most of Alaskans to the U.S. Department of Homeland Security's request the state comply with REAL ID. And the state has been late in complying with this federal mandate.

An extension through Oct. 10, 2018 was granted by Homeland Security in order for the state to begin producing the cards in January 2019, according to a press release from the state Dept. of Administration, thereby requiring another extension.

With so many military members from other states, Homeland Security in the meantime, has allowed military bases and other federal facilities to accept as proper ID Alaska-issued driver's licenses and identification cards. 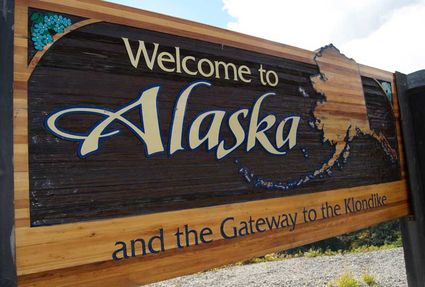 This Alaska welcome sign sits on the scenic South Klondike Highway above Skagway.

REAL ID is a mandate on federal agencies, restricting the circumstances under which they may accept state-issued driver's licenses and identification cards for official purposes. Participation by states is voluntary, although federal agencies are prohibited from accepting driver's licenses or identification cards from noncompliant states for official purposes like boarding aircraft, accessing federal facilities and entering nuclear power plants.

For Alaskans, who travel by air a lot, they will definitely need one, or a valid U.S. passport.

Passports and other federally issued IDs like a Native American tribal photo ID could be used in place of a noncompliant state ID, according to Homeland Security.