How did Juneau become Alaska's capital? 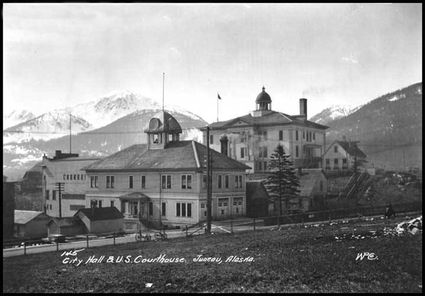 Juneau became the capital of the 49th state on Jan. 3, 1959, after U.S. President Dwight D. Eisenhower signed the statehood act into law. It became the only state capital not accessible by road.

But Juneau was not the capital of the Last Frontier when Alaska became part of the United States in 1867. Sitka was the center of government for Russia-America.

So why did the Americans choose to move government offices to Juneau?

The discovery of gold deposits in the area that became Juneau-Douglas in 1880 caused that region to grow larger than Sitka in population, influence and accommodations. A need also grew to settle boundary disputes, contracts, payments and other legal matters. That meant trips to Sitka to see a judge.

During those early days, only two ships a month sailed between Juneau and Sitka. So if attorneys had issues to resolve, they had to hope they could conclude their business quickly or they would have to wait two weeks to catch the next ship back home.

Juneau lawyers began pressuring Congress to pass a bill that would move Alaska's seat of government to Juneau, stating the town now was the largest city in Alaska, had become an established mining town and had a promising future. Their efforts succeeded.

President William McKinley signed the Alaska Bill, or Civil Code, into law on June 6, 1900, and it put the capital in Juneau. The 600-page document was the longest bill ever passed by Congress at the time.

Moving the seat of government to Juneau wasn't a big deal for most of Juneau's residents and merchants. It basically meant that the governor and surveyor-general's offices would relocate. But then-governor John Brady resisted. He did not want to leave Sitka, because he had a nice home, gardens and business ventures there.

It took six years for the governor's office to move. The Interior Department finally terminated Brady's tenure and appointed Wilford B. Hoggatt as governor in March 1906. Hoggatt immediately set up an office in Juneau. In September, the surveyor-general boarded a steamer with 40 tons of paperwork and traveled to Juneau, which completed the transfer of Alaska's "seat of government."

Juneau officially became Alaska's capital in 1912 when Alaska became a territory of the United States. And the debate as to whether the capital should be moved from Juneau has been going on ever since.

The issue was addressed during the 1955 Constitutional Convention held at the University of Alaska in Fairbanks. While some delegates wanted to avoid the issue, those who wanted the capital to remain in Juneau hoped the final draft of the constitution would make it the permanent capital. Those who wanted the capital moved to Western Alaska wanted nothing that gave Juneau constitutional status as the state capital. But when the convention finished its job in February 1956, the constitution adopted for establishing statehood included Article XV – Schedule of Transitional Measures, Section 20: "The capital of the state of Alaska shall be at Juneau."

That did not settle the issue, however. Soon after Alaska became a state, plans to move the capital were formulated and elections held to see what voters thought.

In 1960, voters turned down an initiative to move the capital to the Cook Inlet Railbelt. In the 1962 general election, voters rejected another proposal to move it to a site not within 30 miles of Anchorage. A few years later, a third plan succeeded when voters approved Initiative Proposal No. 1 in 1974 to relocate the capital to a Western Alaska site at least 30 miles from Anchorage.

After much research, Willow was determined to be the best site for a new capital. The cost of such a move proved too much for Alaska voters, however. They rejected a $966 million general obligation bond to move the capital in 1978, another bond for $1.8 billion in 1982, and a proposal to move the capital to the Matanuska Valley in 2002.

Juneau probably will remain our state's capital well into the foreseeable future.