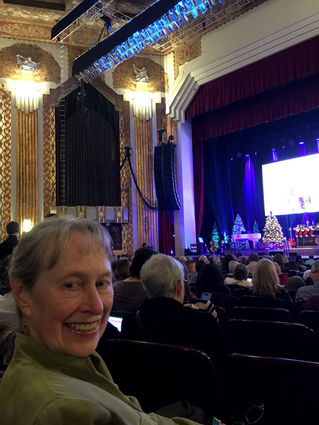 Author Maraley McMichael at the historic Paramount Theatre in Denver, waiting for the performance by Jewel.

In late November I sat with my son and his friend enjoying the ambience of the historic Paramount Theater in downtown Denver. We waited with quiet anticipation along with the rest of the sold out crowd. After a while the house lights went down and a spotlight followed three men as they walked across the stage. First Nikos Kilcher sang a beautiful song he had written for his wife, then brother Atz Lee sang his song titled "Rain" while playing his double bass. Father Atz Kilcher followed up by singing about making time for songs throughout a person's life.

These three family members were the opening act for "Jewel", a folk singer/songwriter born and raised in Homer, Alaska. When Jewel came out on stage, video footage of Alaska played on the big screen behind her and I found myself more focused on the scenery than the music. Oh how I love my state! It was easy to forget I was sitting in Denver. For the next several songs the video scenery continued and during a traditional Christmas Carol, we viewed spectacular northern lights. Another song featured a simple scene of looking out a cabin window at falling snow. Jewel's voice range was evident as she sang a variety of songs.

I remember the stir Jewel caused in Alaska back in 1995 when her first album came out. My husband and I were living in Palmer at the time and I heard her songs enough to recognize her voice on the radio. But after we moved to Slana in 1999, she dropped from my radar. For whatever reason, we couldn't receive the

Now living back in Palmer, reading news articles last summer when Jewel headlined for Salmonfest in Ninilchik helped me catch up with her career. I've also been enjoying "Alaska: The Last Frontier" for the last few years. It's the only Alaska TV reality show I watch and I do so mostly for the scenery and the various "homestead" projects featured. My parents were longtime Alaskans, who retired to Homer in 1988 and lived there until the ends of their lives. Dad arrived in Alaska early enough to acquire a homestead, but that was something he never pursued. He did, however, have the typical homestead mindset of make do, reuse and figure out a way to do whatever was needed for survival. I always admired his ingenuity.

Handmade Christmas gifts are emphasized during the Kilcher clan's holiday episodes of "The Last Frontier". So, it isn't too much of a surprise that Jewel's Handmade Holiday Tour concert also featured handmade crafts. In the upper level of the Paramount Theater tables were set up with "ready-made" crafts for sale, but supplies were available, as well, for concert goers to try making crafts themselves. Cheerful instructors assisted those interested in making wire jewelry, doing bead work, or rubber stamping paper cards.

Atz and Atz Lee joined Jewel for the last few songs of the evening as the background screen projected old family photos of grandfather Yule, grandmother Ruth, and their children involved in various homestead activities (including singing) back in the 1940s and 1950s. A more recent photo featured Atz and fourth grade Jewel, playing and singing in a tavern in Homer. I remember my mother describing a time in the late 1980s when she and dad attended some function where this Kilcher father and daughter duo entertained the gathering by yodeling. All these years later, Atz and Jewel again yodeled to the delight of fans in the Paramount.

That November evening in Denver was the second engagement of Jewel's first ever Holiday Tour. Thanks to my son, I now have another enchanting addition to my "special memories" bank.