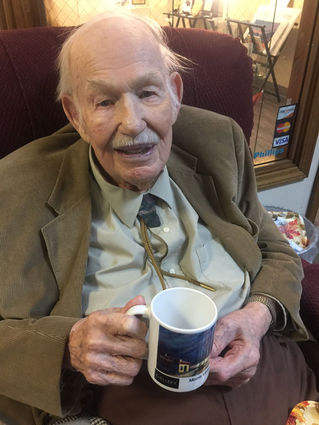 Morris Morgan holds a mug embossed with the painting from his most recent writing challenge.

Fairbanks' Morris Morgan is 96 years old. He has been painting his entire life but he never sells his artwork, because he never knows when he might want to improve upon a piece.

"I think a lot of people start painting and want to sell them right away," he said. "I was keeping them around to see what a mess I'd made of it. I try to learn from that painting, to the next one."

His first-ever art exhibit didn't happen until 2015, and no one was more surprised to see all his work on display than him. Now, his paintings inspire writers in a special writing challenge. Here's how it works.

In partnership with artist Tammy Phillips, Morris provides a painting, then asks writers to stop and think about what they see in the painting, which is on display at Phillips Studio & Gallery in Regency Court Mall, 59 College Road, Suite 211, in Fairbanks.

Writers are invited to write, based on their impressions. The more creative the better. First prize wins $100. Everyone who enters receives a special mug embossed with one of his paintings.

This latest challenge will run from Dec. 29 to Feb. 3. A meet-the-artist celebration and announcement of the winner will take place on Feb. 17 at 2 p.m. at the Phillips Studio & Gallery in Fairbanks.

Here is something to consider when entering: "Like the painting, your stories could be fiction or non-fiction. There is no word limit to this challenge. We appreciate that some stories take more words than others to tell."

The first two challenges lured in many new writers, excited for a more homespun competition.

This is also new territory for Morris Morgan, who never sought the limelight. A native of Grangeville, La., he came to Alaska in June 1960 to work on his doctoral degree in geography. He studied river bank erosion of the Colville River Delta on the Arctic Coast.

In 1962, he secured a teaching position at the University of Alaska Fairbanks so he moved his family north in January, when the temperature plummeted to nearly 30 degrees below zero.

"I was young and foolish enough to come in the middle of winter," he said.

Before too long, he saved, borrowed and "cracked a piggy bank open" to buy a homestead just off Chena Hot Springs Road. He still lives in that house today.

He also served in the military, was wounded in World War II, surveyed the route for the Arctic Gas pipeline from Prudhoe Bay to the Mackenzie River Delta in the 1970s and worked on an early archaeological survey for what was then Mount McKinley National Park. He was recently honored by the National Park Service for that work. He also helped Tanana Chiefs Conference develop village gardening techniques.

He and his wife raised two sons and in the years that followed, grandchildren and great-grandchildren were added to the family.

Throughout all these life events, Morris painted, a pursuit he began in 1948.

"I took sort of what you would call an illustration course," he said. "I worked as an illustrator, mostly pen and ink drawings. I also did a lot of cartography. Essentially I worked illustrating scientific journals."

Morris maintains that he didn't really know what he was doing when he started painting.

"I just know I loved it," he said. "I loved the color. With the little drawing skills I had, I took to coloring pretty well. I studied artists from Van Gogh to Cezanne and a lot of Monet."

Since he never sold his paintings, he ended up with quite a collection. It wasn't unusual for him to let a painting sit for a year, then re-work it. On occasion, he even threw paintings away. Along the way, he developed his own special style.

"Every painting I do, I consider totally separate from everything else I ever did," he said. "It becomes its own entity. Every painting has to stand on its own."

Because he is a geographer at heart, Morris paintings all seem to reflect geographic themes.

"Students could look at my paintings, do a survey of them and know place, time and history," according to Morgan. Geography is only complete if it includes history and anthropology, he added.

Some of his work has hidden meaning, such as the eerie painting entitled "Bog Men March on an Oxidizing Planet."  The wavy trees actually take on the profiles of people. It's his way of showing that "we destroy ourselves. We learned about fire, but understood it not."

"I strain for these kind of effects," he said. "That doesn't' come easy. You gotta tap your brain pretty good for it to come out right."

Morris has never been a very social artist and calls himself a hermit. But he did once take a class with well-known Alaska artist Kesler Woodward.

He also spent some time painting with renowned Fairbanks artist Jean Lester and she painted a portrait of him, which hangs in his studio.

There are stories behind all his paintings. One painting is called "Cancer Alley," and represents a place he worked for 10 years, in Louisiana. It brought back this memory: "In a five-year period, I picked up and stacked 51 million pounds of lead, and that's a conservative estimate. It's the reason my back doesn't work today. I stacked 24 flats, 3,800 pounds in eight hours. It was hard, dirty work."

He loves painting with oils, but switched to acrylics 20 years ago.

"Acrylics have less soul than oils," he said. "But they're faster. Within five minutes, your paint is dry."

He still has a bucket list of themes he wants to create on canvas. 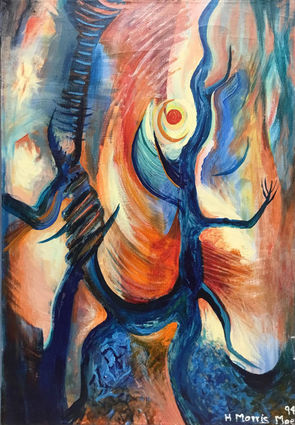 "The Thornbirds," by Morris Morgan.

"I want to paint the polygons and the different kind of polygonal ground up north," he said. "I just never got around to it."

Most of his landscapes are re-imagined places he has seen before.

Although he doesn't sell his paintings, he occasionally offers them as gifts to special people. The ophthalmologist who saved his eyesight is the recipient of a painting featuring spruce trees and a slough along the Tanana River.

"I gave it to him because he saved the color acuity in my eyes," he said, which changed his life. The cornea transplant restored his ability to see color and so he began using even more vibrant color in his paintings.

"I've had a very exciting life and I haven't done nearly all I've wanted to do," he said.