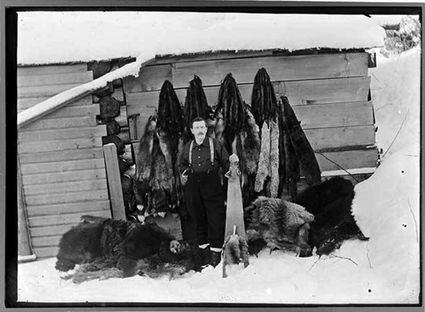 Trapping was the second-leading industry in the Alaska Territory back in the day, and fur auctions became a big part of Anchorage's winter festival that became the Fur Rendezvous.

In the mid 1930s, a few fellows got together and decided it would be great to put together a winter sports tournament for all of Anchorage's residents. Vern Johnson, Clyde Conover, Thomas Bevers and Dale Bowen wanted to organize several teams to compete in hockey and basketball.

With the city's population less than 4,000 at the time, the idea took hold and turned into a carnival to show community support and celebrate the beginning of the end of winter. Revelers bought tickets to the Winter Sports Carnival for $2 apiece (about $36 in 2018 dollars), which got them in to all of the activities around town.

It didn't take long for fur trading to become part of the winter festival, as that was the second-leading industry in the Territory. A fur-trading venue provided trappers and buyers a golden opportunity to meet and ply their trade without using middlemen. Organizers of the event came up with trapping contests that included categories for the longest fox, the best fox and the finest ermine pelts. And since miners and trappers often had beards in those early days, a "law" was enacted that all men had to grow beards for this event or they could be fined.

The carnival was dubbed the Winter Sports Tournament and Fur Rendezvous in 1937, and the first Fur Rendezvous pin was designed two years later. Every year since, a different design has been selected and reproduced on pins, spoons, tie tacks and other collectables.

In just a few years, the idea for a competitive sporting event turned into a major revenue-maker and stress-reliever for Anchorage residents, as well as for those who traveled into town from other parts of the Territory and "Outside."

Bevers, a local businessman and Anchorage Fire Department Chief, auctioned several lots of furs at the 1939 Fur Rendezvous. Jose Lester later recounted what she had witnessed at the fur auction:

"I surely enjoyed seeing those fellows scrap among themselves for the furs. They meant business, too, and to watch them you'd think that they'd gladly cut each other's throats if not restrained by the ethics of the game. I never have seen such a bunch of men get so deep down in a batch of notes as they did - hat and all...."

Lester observed that the reason for the Rendezvous might have been the furs, but that most Anchorage residents turned out to have a good time.

"All of the fanfare and entertainment that go to make up a real exposition were there. On the Saturday before the auction started the festivities got underway."

The Fur Rendezvous was put on hold during World War II years, but it resumed in 1946. It traditionally lasted for 10 days, but in 2004, festivities were extended through early March. It now leads into the Iditarod Trail Sled Dog Race and includes more than 100 events, including the Rondy Grand Prix (oldest street race in the United States), a charity Miners' and Trappers' Ball, beard contests and snow sculpture competitions.

And even though the Fur Rendezvous is not as important to break up the winter blues as it once was, it still provides lots of fun, entertainment and a boost to the local economy.