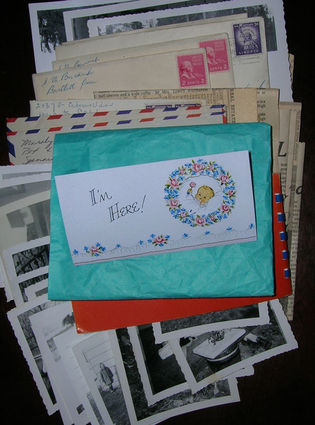 The box's tissue-wrapped contents included photos, articles and other items, including a birth announcement.

One early January afternoon a few years back, I picked up a small box from the dining room table where my husband always piles our incoming mail. I was surprised to see the return address of one of my mother's cousins in California. We only correspond at Christmas time and I hadn't heard from her the past two years. Elsie had never before sent me anything larger than a letter, so I was immediately curious about the contents.

Inside a folded letter lay on top of a tissue wrapped bundle. Upon opening the letter, I immediately saw that it was not Elsie's handwriting and my heart skipped a beat. Glancing to the end, I saw the letter was written by her daughter. Prepared for the worst, I was happy to learn near the end of the first paragraph that 97-year-old Elsie was still alive and well.

The letter explained how a young relative in another line of cousins had recently given Elsie a large box of family photos and history after cleaning out her deceased parent's home. While Elsie's daughter was in California visiting during Christmas, the two of them and another sister had gone through the box and sorted the contents into various family groups. I was to share with my siblings what was sent to me.

Soon I was lost in the past as I looked at each item. There were several New York newspaper articles and photos about my mother during her missionary nurse years in Alaska in the early 1950s. Next came a small framed photo of mom in her Syracuse University nursing uniform and then wedding photos and more newspaper articles. Then I saw photos of my siblings and me growing up and other various important events that took place in our lives, including the 1964 earthquake. There was also a birth announcement for my youngest sister Shirley (who would soon turn 56) and several sets of the small 1″ x 1″ school photos of us four kids.

I was so excited to receive this family history treasure that I called Elsie's daughter to thank her. She lives in Atlanta, Georgia, and up until that point, I had only heard her mentioned by name a few times in my entire life.  I explained that the birth announcement was especially appreciated, because none of us had baby books containing that kind of recorded information. We had a great conversation, mostly about family members.

Then I called my sister Shirley and told her that I knew what time of the day she was born. Of course she wanted to know how I'd figured that out.

"I'm holding one of your birth announcements" I said, "and in Mom's handwriting it states you were born at 1:50 am." Shirley was happy, to say the least.

A bundle of old newspaper articles and photos unexpectedly arriving in a box by snail mail is a delightful surprise in the everydayness of life. Those who love history will understand.