In praise of motels, quirks included 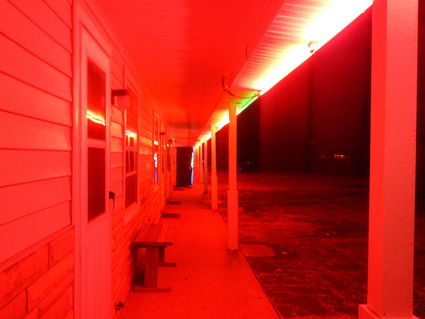 The neon lights along the roofline of the Ho Hum Motel cast a satanic light.

In my travels I've found that, yes, chain hotels are always dependable just for the fact that they're, well, everywhere, but I really don't care for them.

This summer we stayed at a Comfort Inn somewhere in Illinois, and it freaked me out that I couldn't open the window. And this is something that most chains do as the use of the heating and cooling system determines the air in the room.

I like fresh air and do not like air conditioning – I believe most Alaskans would agree with me.

I also resent that a bed costs over $90 for one night. I know that running a hotel is expensive, but surely there must be an alternative?

I love motels. Less expensive than chains, they're usually run by local characters who can point you in the direction of a restaurant - although the quality may not be what you're used to.

And here I would like to digress and complain about the quality of food when we've traveled across the country. We had the worst breakfast ever in Amana, Iowa, in the middle of the breadbasket of America.

I picked the Ho Hum Motel off the web just because of the name. The Ho Hum Motel in Ashtabula, Ohio, was an overnight gem for $62. Clean and comfortable, this motel hardly registers on Google. They have no website and you have to call them (440-969-1136) to make a reservation.

Yes, the one of the men running the place had a hard time with the credit card machine, but they all were so endearing, and tried so hard to make us welcome, that it was difficult to become inpatient even though we had driven for seven hours and were very tired.

Tucked away off the main road, it was quiet, but it seems that trains follow us everywhere and we fell asleep to the sound of a train whistling in the distance. It's a sound I have always felt comforted by, having lived next to the Alaska Railroad tracks in Turnagain in Anchorage and in Skagway, home of the White Pass and Yukon Route Railway.

Another thing I like about motels is that you can find one outside the city center and in a quiet neighborhood like Ho Hum.

Rolling into Sundance, Wyoming, we found the Arrowhead Motel, and stayed there for a mere $58. Arriving as the sun was setting, the owner and a friend were sitting out front drinking a beer and welcomed us heartily. However, it was on this trip that we decided that all of America was drunk because we saw much public drinking and had to deal once with people partying in the room next door.

We were greeted at the Sundance Post Office by a woman who had lived in Alaska with her late husband and she was so excited to talk about her experience.

There's a real fascination and nostalgia for Alaska, and so Alaska license plates open doors to conversations along the way, but also give you a real excuse for being lost and dawdling along the road when you're unclear as to which way to go. I would scream out the window, "Sorry I'm from Alaska and I have no idea of what I'm doing."

Staying over in Alaska and the Yukon

Alaska log roadhouses once numbered more than 3,000 and offered simple accommodations along trails and crude roadways, much like today's motels. Some can still be found on the Richardson and Glenn Highways, like the Talkeetna Roadhouse, Gakona Lodge and Trading Post, Copper Center Lodge, and the Black Rapids Roadhouse.

The room rates for the Eureka Roadhouse at Mile 128 of the Glen Highway run $115 to $125 in the winter. The rooms are just down the hall from the lounge and the restaurant, where solid meals are served in Alaska-size proportions.

This is in a tradition of roadhouses like Rika's Roadhouse, now part of Big Delta State Historical Park on the Tanana River. John Hajdukovich built the inn in 1909 and asked guests to leave money on a table. Its café has a reputation for serving delicious homemade meals.

Big Delta State Historical Park is a ten-acre park with 23 RV camping sites with picnic area, toilets, water and a dump station. The park is eight miles north of Delta Junction at Mile 274.5 on the Richardson Highway.

The roadhouses are a homey reminder of the past, especially if you have stayed in any of the motels made of Temco trailers, a common building component in the Far North.

The 1202 Lodge in Beaver Creek, Yukon Territory, is where I've always stayed on the 18-hour trip from Skagway to Anchorage. It's a good rest stop before going over the border with room rates in January at $92. The trailer section of the inn is closed in the winter and the rooms available are in the log cabin inn, which also houses a laundromat, store, gas station and restaurant. Nice people - I highly recommend it. 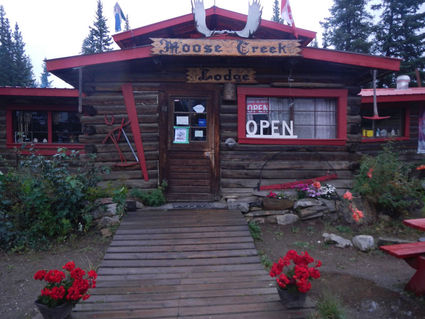 But the most curious experience I've had while traveling through the Yukon, was rounding the eerily named Destruction Bay late one night. With the northern lights playing overhead was the motel, which was unmanned and you took a key off the board and dropped the money in a slot. For sure a chair went up under the doorknob that night.

The Moose Creek Lodge in Mayo, Yukon Territory, on the North Klondike Highway, offers double-occupancy log cabins for $125 plus 5 percent GST - and that's Canadian. There is a $15 charge for each extra person and pets are welcome for an extra $5 CDN.

Motels offer the security of having your vehicle right outside your room – no late night burglars rifling through your car.

Take a chance on road trips and sample the web of old-time motels throughout the country. Sometimes they're gems and sometimes stinkers, but it's always an adventure.