Border dispute heats up due to gold 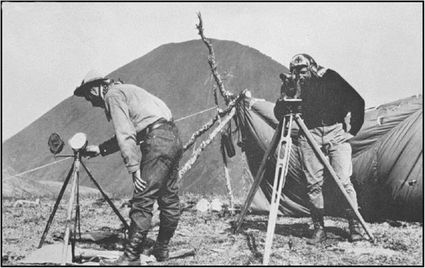 A crew surveying the Alaska-Canada boundary in the early 1900s adjusts equipment near Monument 92.

There was no border established between the Great Land and Canada when the U.S. agreed to purchase Alaska from Russia for 2 cents an acre in March 1867. The lack of an agreed-upon boundary caused problems from the get-go.

Russian maps of the time showed more land belonging to them than was stipulated in an 1825 treaty between Russia and Great Britain. That treaty divided the Northwest American territories between the Hudson's Bay Company and the Russian-American Company trading areas and described the boundary as following a range of mountains in Southeast Alaska parallel to the Pacific Coast – but in some places there were no mountains.

Great Britain asked for an official survey for many years, but the United States repeatedly refused, claiming it would cost too much. Canada surveyed the boundary at the Stikine River, so it could set up a customs station to collect duty on goods headed to the Cassiar gold fields, discovered in 1872. Other surveys occurred later in the area around the Fortymile gold discoveries.

The issue of an official boundary finally came to a head following the discovery of gold in the Klondike in the late 1890s. Thousands of hopeful prospectors landed in Skagway and then streamed up the Chilkoot Pass and crossed into Canada to get to those rich gold fields. Both countries recognized that every square foot of ground could yield enormous wealth, so the exact location of the boundary became critical.

Following the Klondike discovery, the Canadians sent a detachment of North West Mounted Police to the head of the Lynn Canal, a main gateway to the Yukon. Canadian officials wanted ownership of Skagway and Dyea, which would allow Canadians access to the Klondike gold fields without crossing American soil. Canada asserted that that location was more than 10 marine leagues from the sea, which was part of the 1825 boundary definition.

But prospectors flooding into Skagway didn't agree. Some say that a group of heavily armed Americans demanded the Canadian flag at the police post be lowered or the Americans would shoot it down. Americans thought that the head of Lake Bennett, another 12 miles north, should be the boundary between the two territories.

The Canadians retreated and set up posts on the summits of the Chilkoot Pass and White Pass – each post equipped with a mounted Gatling gun.

The Yukon Field Force, a 200-man army unit, then set up camp at Fort Selkirk. From there, troops could be dispatched quickly to deal with disputes at either the coastal passes or the 141st Meridian.

This provisional boundary was grudgingly accepted by both sides, although both the Canadians and the Americans claimed the land as far down as tidewater on Lynn Canal in Southeast Alaska.

In 1903, a tribunal was established to finally resolve the issue. And U.S. President Theodore Roosevelt told the panel that if they did not settle the dispute to his liking, he would send in the U.S. Marines.

Canadians felt they would have support of British officials in their effort to claim Southeast Alaska. But the British needed America more than they needed Canada and believed that Roosevelt meant business. After three weeks of negotiations, the British sided with the Americans and the current border was established on paper. A survey to mark the border began in 1908 and was completed in 1914.

Alaska's border with Canada is one of the greatest feats of wilderness surveying ever undertaken. Marked by metal cones and a clear-cut swath 20 feet wide, the boundary is 1,538 miles long. The line is obvious in some places, such as the Yukon River valley, where crews cut a straight line through forest on the 141st Meridian. In other areas, like the summit of 18,008-foot Mount St. Elias, the boundary is invisible.

In 1925 the treaty was amended. It created a permanent International Boundary Commission to keep an accurately located and visible border. The markers are shaped like the Washington Monument and are supposed to be placed within sight of one another.