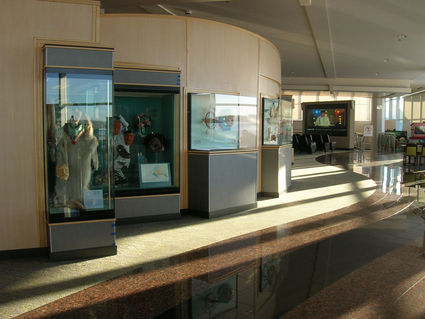 The Alaska Native Art Collection and lounge area at the Ted Stevens International Airport in Anchorage.

My husband dropped me off at the Anchorage airport for a flight to Denver early last November. It wasn't until after I'd gone through TSA that I learned my flight was delayed for two hours. I wasn't ready to sit and read and I found myself restlessly wandering the aisle checking out the stores between my gate and TSA. After I enjoyed perusing the Alaskan books on display at the front of the bookstore, I decided to treat myself to a specialty coffee. While standing in line, I noticed the sign for the Alaska Native Art Collection. Instantly I knew what I wanted to do with my extra time, left the coffee line, and took the elevator upstairs. Years earlier I had run up just to see Dolly Spencer's Eskimo dolls. Now, finally, I had time to leisurely view the whole collection.

I had no company in the display or lounge area for at least half an hour. Later I noticed a lady sitting at one of the tables. In front of her was a miniature dog sled, which looked similar to one I had just seen behind glass. Others joined me to view the intriguing art objects – numerous and varied items from over 40 different locations in Alaska. Just before I finished, my daughter called and I walked off to a corner so I wouldn't disturb the others. While we talked I noticed the lady with the mini dogsled standing next to the mini dogsled on display, then she walked away. With my call complete, I walked over to the dogsled display before resuming where I'd left off. To my surprise the lady joined me and we were quickly engaged in conversation. She retrieved her dogsled and we stood there comparing them – agreeing that it seemed they both could have been made by the same person, Bryon Willoya from Nome. But, the one on display included numerous accessory gear – a model fishtrap, ice scoop, an ice hook, ice tester, rifle and gun case, harpoon, axe, saw, snowshoes and snares.

During our conversation, she said she did bead work and was working on a project. "Would you like to see it?" she asked. Of course! 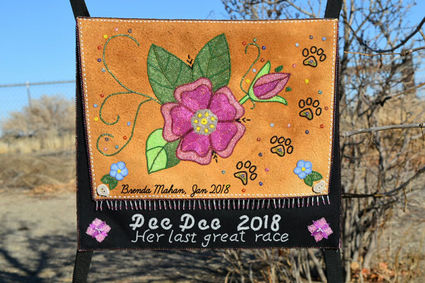 I followed her back to her table where she brought out from a bag a fairly large piece of soft moose hide featuring a bright pink wild rose in the center as well as a few forget-me-nots. Fireweed was planned for the bottom edge. The bead art was absolutely beautiful. She explained that it was a sled bag for the dogsled of an Iditarod musher making her last trip. I immediately asked if she meant DeeDee Jonrowe. That started the conversation in a whole new direction and eventually I asked the lady if she minded if I knew her name.

It turned out Brenda was returning to her home in Reno after being in Alaska for the final illness and funeral of her father. She is Athabascan, but was adopted by a white couple and spent part of her growing up time in Cordova. With talk about DeeDee and the beadwork dogsled bag, the miniature dog sled Brenda's mother had just given her, Native art in general and that both she and her birth mother sell their art at the Alaska Native Medical Center gift shop, we had a fascinating conversation.

Soon it was time to part ways. I never even got Brenda's last name. But thanks to an unexpected flight delay last November and my spur-of-the-moment decision to visit the Alaska Native Art Collection, I had an extraordinary encounter with a very talented bead artist and her work-in-progress. You can bet I will be trying to get a glimpse of the traditional old-style sled bag hanging from the handle bar of DeeDee's dogsled whenever I see photos or video footage of her and her team during this, her last Iditarod race.