By Burton Laine
The Senior Reporter 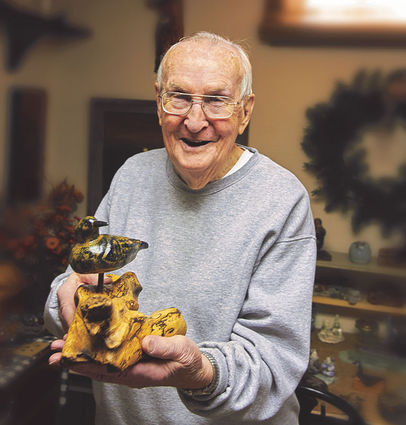 Once a U.S. Forest Service worker in Alaska, Ray Naddy is now retired and a prodigious artist, living in Duluth, Minn. He is especially fond of wood and many of his sculptures are mounted on wood that emphasizes the grain.

Ray Naddy could be looked at as an ultimate overcomer. He grew up in Duluth in a family that went through tragedy early in his life, leaving him with a speech defect. He struggled through school. It wasn't until about 1945 that tape recorders became affordable, and he was able to listen to himself talk.

"By listening to myself on the tape, I was able to make the changes needed to be able to speak coherently," he says. After high school in 1947, he went to college and took an unusual turn. He laughs, "Here I was, not able to speak for years, and I decided to go into journalism!" He went on to a successful career as a journalist and columnist.

What does this have to do with art?

When he was in grade school an older brother, Lew, "adopted him", as Ray says, and encouraged him. When his brother went into the navy after high school, he sent Ray an oil painting kit. Ray was 10 years old at the time. He had already been doing drawings, mostly of birds, but this opened up a new way of expressing himself.

Ray's journalism career took him from Duluth to the U.S. Forest Service in Alaska, and a similar job in Oregon before he retired in Duluth. Every step of the way he learned new art forms to express himself. His connection with nature and the outdoors was always present, and he progressed through art forms including drawing, oil painting, soap stone carving, working in clay and block printing. Many of the art forms he now works in he learned later in life.

"I'm at a point where I don't oil paint much anymore. You have to wait for the paint to dry. I'm impatient. I want faster results now," he explains.

When I walked around the art museum that doubles as his home, I couldn't turn a corner without seeing more artwork than I had ever seen in one place before. Every wall is covered with paintings and wood block prints, or shelves with clay sculptures or stone carvings. Every flat surface in the house is covered with sculpture, including chairs and the bed in the spare bedroom. Ray doesn't like to sell his artwork, so he still has most of what he has created.

He loves the grain in wood, and many of his sculptures are mounted on wood that emphasizes the grain. Natural objects are added to the tiny scenes created with his figures. "I'll be walking and see a piece of birch and say, 'I can use that'. Then I say, 'it needs a chickadee on it'."

Ray also loves writing poetry, and some of it is combined with other art forms. He picked up a three-ring binder with poems and started reading. Two of the poems were of his beloved wife, Rosalie, when she was in the hospital during her last days. He eloquently recited the pain, frustration-and hope for the future.

We took an extensive tour of his artwork. As we left one room and went to another one, he says, "You haven't seen anything yet," or "Now we'll get to the good stuff."

Finally, we ended back in the room where we started and I noticed pieces that I had missed the first time through. I'm guessing I'd still feel that way if I went through all of his art museum rooms again.

"In 1990 Lake Superior College started a ceramics program, and I needed something to do. So I went to see what they were doing and I said, 'That's my field. I can make birds this way.' And I went nuts making birds." He added, "This is what keeps me young. Finding things to do with my fingers. I love working with the clay." He received an award as the school's most outstanding student in 2002 at the age of 75. 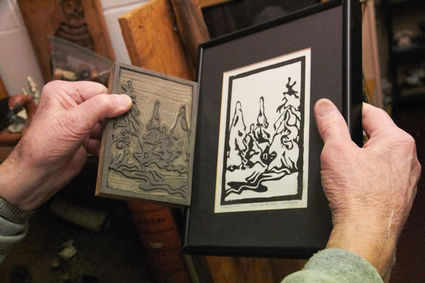 On the left is Ray's wood stamp carving, on the right the ink on paper result.

At one time an instructor from Foshan China stopped in at the college, and Ray asked him to stay with him for a week or so. Ray says there are 400 ceramics factories in Foshan. The instructor ended up staying for a month and became a friend. The next summer the college got an invitation to attend the annual ceramics celebration in China. "Eight of us went to China to work with the Chinese masters," Ray said. "That was fantastic. The next year we were invited back."

Ray has learned and developed a mastery of two different art forms after the age of 70. "Every once in a while I find a new art program that really turns me on, and I get hooked on that."

Linoleum block prints are his current art form. "I really enjoy doing that. That's how you get to be 90 years old. You have to keep moving."

Reprinted with permission from The Senior Reporter, Duluth, Minn.